Head and neck cancer is one of the most commonly occurring types of cancers. As its clinical symptoms are not easily defined, routine screening is highly recommended so that any cancer can be detected early. FV Hospital’s Otorhinolaryngology Department (ORL) is offering a head and neck cancer screening programme utilising the Olympus ENF-V2 ultrathin rhinolaryngoscope, imported from Japan.

The most common head and neck cancers include nasopharyngeal carcinoma (NPC), tonsillitis, pharyngeal-laryngeal cancers, neck lymph node cancer, thyroid cancer and tongue cancer. The clinical symptoms of each are not typical and may include a regular stuffy, runny nose, headaches, tinnitus, swallowing difficulties, coughing up blood, a husky voice, neck pain and inflamed lymph nodes – symptoms that often occur with less serious problems.

Therefore, in addition to diagnostic imaging procedures, such as CT scans and MRIs, which enable physicians to identify cancer in its early stages, endoscopy ranks among the best options for accurately ascertaining the presence of cancer.

Achieving the highest standard of care through superb imaging quality

In recent years, otorhinolaryngologists have shown an increased need for enhanced medical imaging.

Olympus Corporation, based in Japan, has created a system that not only delivers outstanding image quality, but makes it easier to navigate within the pharynx, larynx and nasal cavity: The ENF-V2 Video Rhinolaryngoscope. FV Hospital’s ORL is one of a few hospitals nationwide equipped with this leading rhinolaryngoscope. An ultrathin rhinolaryngoscope with an advanced miniature colour CCD chip for high resolution “chip-on-the-tip” technology and narrow band imaging (NBI) compatibility, the ENF-V2 Video Rhinolaryngoscope has an external diameter of just 3.2 mm – 0.7 mm smaller than that of a conventional fibrescope. The ENF-V2 Video RhinoLaryngoscope delivers outstanding imaging performance with some of the brightest and most vivid images available from a rhinolaryngoscope.
The ultrathin design of the external diameter enables optimal angulation of 130 degrees in accordance with the adjustment of an automatic control section that eases insertion with limited invasion and effective navigation. Its NBI endoscopic system, with a wide field-of-view of 90 degrees, not only offers an extended view but also delivers superior image quality in high resolution.

Another advantage of this ultrathin rhinolanryngoscope is that it causes almost no pain during examination and facilitates insertion into small cavities, allowing better observation of nooks and crannies due to its slim size and potential for angulation. These qualities mean this instrument can used to examine paediatric patients.

Until recently, it was assumed that the only way to obtain superior image quality was to use an endoscope with a larger diameter, and that a thinner distal end of inexorably meant reduced image quality. Those preconceptions have been debunked with the development of the Olympus ENF-V2 Video RhinoLaryngoscope.

Head of FV Hospital’s ORL Dr Nguyen Quang Dai –– an experienced authority in the treatment of Oto-rhino–laryngology, airway and other head and neck cancers – says he finds the slimness of the scope to be an advantage. “Nobody wants anything larger than absolutely necessary inserted into their nose. There is also that small subset of patients for whom the slimmer scope becomes highly useful – those patients with nasal anatomy that makes it difficult to pass the larger scope through. A smaller caliber scope makes quite a difference.”

This ultrathin rhinolaryngoscope and its narrow band imaging capability has already demonstrated optimal advantages in early screenings for cancerous lesions in the head and neck, including biopsies and polyp recession. 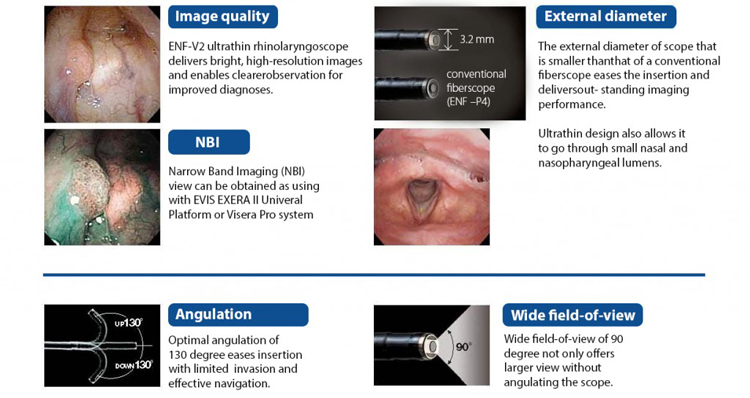 Narrow band imaging (NBI) endoscopy is an advanced technique which is being applied worldwide. Japan was the first country to develop and apply this technique in 1994; since then, it has been used to detect head and neck cancer in its early stages in many patients.  This has resulted in a significant decrease of patients identified with untreatable or hard-to-treat later stage cancers.

NBI technology enables clearer observation of cells by characterising tissues with colour simulation on the NBI view. Compared to conventional endoscopy using fiber endoscope or large band imaging, which use complex light with bands covering all wavelengths from 380nm to 780nm, NBI endoscopy offers advantages in the monitoring and early detection of cancer by enablising physicians to observe the smallest changes in superficial mucosa and tissue structures during endoscopic examinations.

There are many benefits in using NBI endoscopy, including the ability to detect early stage cancerous lesions; a clear distinction between cancer and healthy tissues, facilitating endoscopic biopsy and enhancing diagnosyic accuracy; and the production of high resolution images, enabling better assessment of the integration of tumour so that the best treatment protocol can be devised.

Dr Dai said: “Distal chip images in general are a fantastic advance from fibre optic images, and now NBI brings an additional capability in our quest for clear visual   information. NBI is a technology which accentuates vascularity. NBI also helps to accentuate those very faint, hazy white lesions that can be so subtle or inconspic- uous that you could fail to appreciate them with standard light.”

Dr Dai notes: “I use NBI because it allows me to see things in a different way, and then I switch back to standard light to look at a specific area that needs further attention.”