Replacing the knee is a safe and effective procedure which reduces pain and increases mobility. Patients are able to walk just days following the surgery. With the utilisation of advanced surgical techniques and state-of-art medical equipment, the surgical team in FVH’s Orthopaedic Department has helped many patients change their lives with knee replacements.

Mrs N.T.P.V., a 67 year old retired ORL doctor at Vietnam-Cuba Hospital living in Hanoi, visited FV Hospital after receiving several consultations at some hospitals in the capital. Mrs V. suffered from knee degeneration during the last 25 years, and as a result always had persistent pain and discomfort in both her knees, which also made her prone to falls. Her falls had increased recently, and her family was very concerned about Mrs N.T.P.V.’s condition.

Dr Le Trong Phat, Head of FV Hospital’s Orthopaedics Department directly provided consultation and examination to Mrs V. After having all the necessary investigational tests, Dr Phat decided the best course of action for Mrs V. was a bilateral total knee replacement. According to Dr Phat, this procedure had rarely been performed in Vietnam. Bilateral total knee replacement is often carried out in developed countries where there is adequate facilities for post-operative care and where the health status of the patient was overall in good condition. Mrs V was assessed by Dr Phat to have a good level of health to be able to recover following a bilateral knee replacement, and subsequently indicated the surgerical treatment.

Mrs V. suffered from knee degeneration for a long time, which was due to damage sustained to her meniscus, the cartilage layer was totally worn out This was the reason why Mrs V suffers pain. She could not walk normally and found it very difficult to stand up straight. After 3-hours of surgery, Mrs V had both of her knees replaced. One day after the surgery, Mrs. V started her physiotherapy programme, and after just 2 to 3 days of recovery, she was able to walk with crutches support. 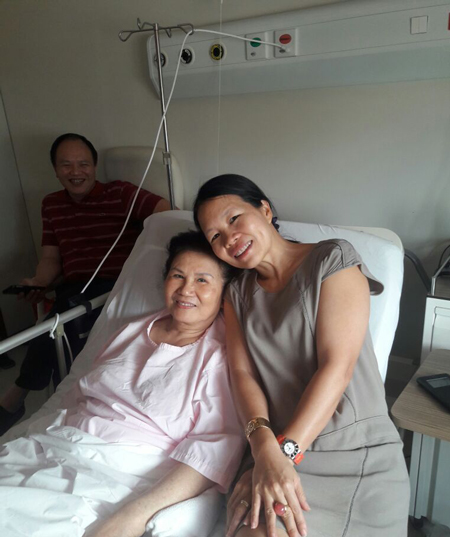 Knee replacements are most commonly performed on people between the ages of 60 to 80 years of old. However, younger people with severe knee pain and disability also may benefit from the procedure.
Knee replacement surgery involves removing damaged meniscus, and the joint surface of the thighbone (femur) and the shinbone (tibia). Joint surface is then replaced with an artificial knee (prosthesis) made of metal and plastic. The prosthesis restores the function of the knee.
Total knee replacement can increase mobility and decrease pain in people who have an injured or arthritic knee joint. Patients who have knee replacement surgery experience less pain and greater mobility in their knee after the procedure. The rate of compilcations related to the surgery is under 2 percent, therefore this procedure is considered to be very safe and offers major improvements to the lives of patients.