The bone structure of the knee joint is formed by the femur, the tibia, and the patella. The ACL is one of the 4 main ligaments within the knee that connect the femur to the tibia.

The knee is essentially a hinged joint that is held together by the Medial Collateral (MCL), Lateral Collateral (LCL), Anterior Cruciate (ACL) and Posterior Cruciate (PCL) Ligaments. The ACL runs diagonally in the middle of the knee, preventing the tibia from sliding out in front of the femur, as well as providing rotational stability to the knee.

The Anterior Cruciate Ligament (ACL) is one of the most commonly injured ligaments of the knee. In general, the incidence of ACL injury is higher in people who participate in high-risk sports, such as basketball, football, skiing, and rugby. 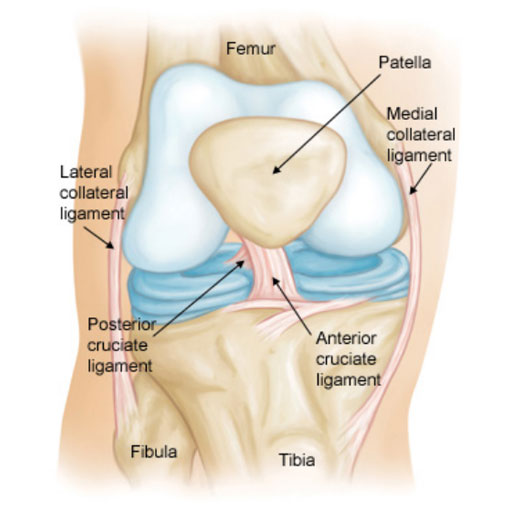 Approximately 50% of ACL injuries occur in combination with damage to the meniscus, articular cartilage, or other ligaments. Additionally, patients may have bruises of the bone beneath the cartilage surface. These may be seen on a Magnetic Resonance Imaging (MRI) scan and may indicate injury to the overlying articular cartilage.

It is estimated that 70% of ACL injuries occur through non-contact mechanisms while 30% result from direct contact with another player or object.

The mechanism of injury is often associated with deceleration coupled with cutting, pivoting or sidestepping manoeuvres, awkward landings or “out of control” play.

Several studies have shown that female athletes have a higher incidence of ACL injury than male athletes in certain sports. It has been proposed that this is due to differences in physical conditioning, muscular strength, and neuromuscular control. Other hypothesised causes of this gender-related difference in ACL injury rates include pelvis and lower extremity (leg) alignment, increased ligamentous laxity, and the effects of oestrogen on ligament properties.

Immediately after the injury, patients usually experience pain and swelling and the knee feels unstable. Within a few hours after a new ACL injury, patients often have a large amount of knee swelling, a loss of full range of motion, pain or tenderness along the joint line and discomfort while walking. 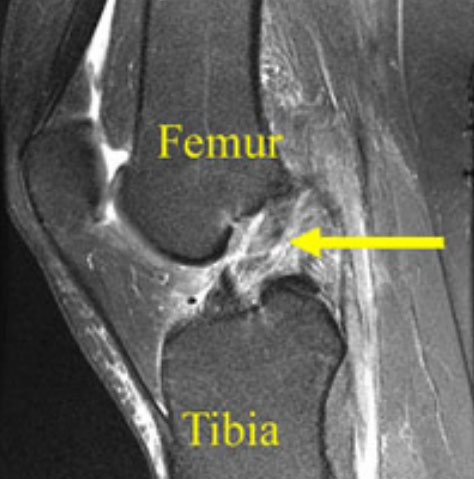 MRI of complete ACL tear. The ACL fibres have been disrupted and the ACL appears wavy in appearance [yellow arrow].

When a patient with an ACL injury is initially seen for evaluation in the clinic, the doctor may order X-rays to look for any possible fractures. He or she may also order a Magnetic Resonance Imaging (MRI) scan to evaluate the ACL and to check for evidence of injury to other knee ligaments, meniscus cartilage, or articular cartilage.

In addition to performing special tests for identifying meniscus tears and injury to other ligaments of the knee, the doctor will often perform the Lachman’s test to see if the ACL is intact.

Arthroscopic picture of torn medial meniscus in chronically ACL-deficient knee. In this case, the torn meniscus is pushed forward [yellow star] and locked in front of the knee [called a “bucket handle” meniscus tear], so the patient could not straighten out the leg.

The natural history of an ACL injury without surgical intervention varies from patient to patient and depends on the patient’s activity level, degree of injury and instability symptoms.

The prognosis for a partially torn ACL is often favourable, with the recovery and rehabilitation period usually at least 3 months. However, some patients with partial ACL tears may still have instability symptoms. Close clinical follow-up and a complete course of physiotherapy helps identify those patients with unstable knees due to partial ACL tears.

Complete ACL ruptures have a much less favourable outcome. After a complete ACL tear, some patients are unable to participate in cutting or pivoting-type sports, while others have instability during even normal activities, such as walking. There are some rare individuals who can participate in sports without any symptoms of instability. This variability is related to the severity of the original knee injury, as well as the physical demands of the patient. 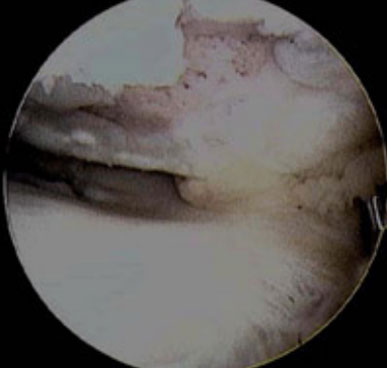 About half of ACL injuries occur in combination with damage to the meniscus, articular cartilage or other ligaments. Secondary damage may occur in patients who have repeated episodes of instability due to ACL injury. With chronic instability, up to 90 % of patients will have meniscus damage when reassessed 10 or more years after the initial injury. Similarly, the prevalence of articular cartilage lesions increases up to 70 % in patients who have a 10-year-old ACL deficiency.

In conservative treatment, progressive physiotherapy and rehabilitation can restore the knee function to a condition close to its pre-injury state, correct patterns and educate the patient on how to prevent instability. This may be supplemented with the use of a hinged knee brace during activities which may place the knee at risk of instability. However, many people who choose not to have surgery may experience secondary injury to the knee due to repetitive instability episodes.

Surgical treatment is usually advised in dealing with combined injuries (ACL tears in combination with other injuries in the knee). However, deciding against surgery is reasonable for select patients. Nonsurgical management of isolated ACL tears is likely to be successful or may be indicated in patients:

Patients treated with surgical reconstruction of the ACL have long-term success rates of 82 % to 95 %. Recurrent instability and graft failure are seen in approximately 8 % of patients.

The goal of the ACL reconstruction surgery is to prevent instability and restore the function of the torn ligament, creating a stable knee. This allows the patient to return to sports. There are certain factors that the patient must consider when deciding for or against ACL surgery. 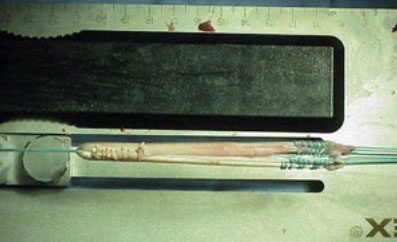 The semitendinous hamstring tendon on the inner side of the knee is used in creating the hamstring tendon autograft for ACL reconstruction. Some surgeons use an additional tendon, the gracilis, which is attached below the knee in the same area. This creates a two- or four-strand tendon graft. Hamstring graft proponents claim there are fewer problems associated with harvesting of the graft compared to the patellar tendon autograft.

Before any surgical treatment, the patient is usually sent to physiotherapy for pre-operative rehabilitation. Researches show that patients who have a stiff, swollen knee lacking full range of motion at the time of ACL surgery may have significant problems regaining motion after surgery.  It usually takes 3 or more weeks from the time of injury to achieve full range of motion. It is also recommended that some ligament injuries be braced and allowed to heal prior to ACL surgery.

The patient, the surgeon, and the anaesthetist select the anaesthesia used for surgery. Patients may benefit from an anaesthetic block of the nerves of the leg to decrease postoperative pain.

The surgery usually begins with an examination of the patient’s knee while the patient is relaxed due the effects of anaesthesia. This final examination is used to verify that the ACL is torn and also to check for looseness of other knee ligaments that may need to be repaired during surgery or addressed postoperatively.

If the physical exam strongly suggests the ACL is torn, the selected tendon is harvested (for an autograft) or thawed (for an allograft) and the graft is prepared to the correct size for the patient. 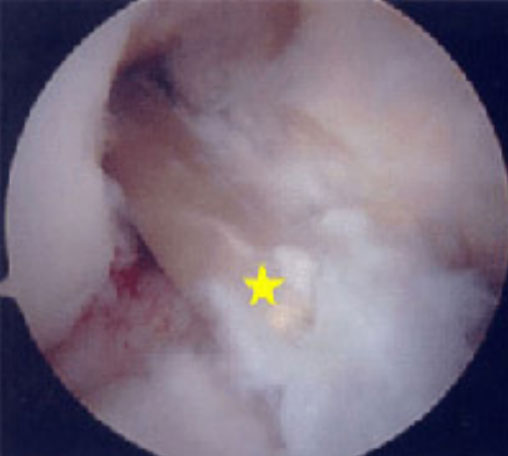 After the graft has been prepared, the surgeon places an arthroscope into the joint. Small (one-centimetre) incisions called portals are made in the front of the knee to insert the arthroscope and instruments and the surgeon examines the condition of the knee. Meniscus and cartilage injuries are trimmed or repaired and the torn ACL stump is then removed.

Before the surgery is complete, the surgeon will probe the graft to make sure it has good tension, verify that the knee has full range of motion and perform tests such as the Lachman’s test to assess graft stability. The skin is closed and dressings (and perhaps a postoperative brace and cold therapy device, depending on surgeon preference) are applied. The patient will usually go home after 3 hospitalisation days.

Infection: the incidence of infection after arthroscopic ACL reconstruction has a reported range of 0.2% to 0.48%. There have also been several reported deaths linked to bacterial infection from allograft tissue due to improper procurement and sterilisation techniques.

Bleeding, numbness: rare risks include bleeding from acute injury to the popliteal artery (overall incidence is 0.01%)  and weakness or paralysis of the leg or foot. It is not uncommon to have numbness of the outer part of the upper leg next to the incision, which may be temporary or permanent.

Blood clot: a blood clot in the veins of the calf or thigh is a potentially life-threatening complication. A blood clot may break off in the bloodstream and travel to the lungs, causing pulmonary embolism or to the brain, causing stroke. This risk of deep vein thrombosis is reported to be approximately 0.12%.

Instability: recurrent instability due to rupture or stretching of the reconstructed ligament or poor surgical technique (reported to be as low as 2.5% and as high as 34%) is possible.

Stiffness: knee stiffness or loss of motion has been reported at between 5% and 25%.

Rehabilitation is a crucial part of successful ACL surgery. With new surgical techniques and stronger graft fixation, current physiotherapy uses an accelerated course. Rehabilitation starts on the day of surgery and includes cold therapy programme, early muscles activation and mobilisation of the knee, stand and walk with crutches as well as learn on how to protect graft during the healing stage. Much of the success of ACL reconstructive surgery depends on the patient’s dedication to rigorous physiotherapy.