WHAT IS A TONSILLECTOMY?

A tonsillectomy is the surgical removal of the tonsils. The tonsils are two small almond-shaped mounds of lymphatic tissue that sit on either side of the back of the throat. They are part of your body’s system to fight infection and are only important during the first few years of life. As we grow through childhood the tonsils usually shrink significantly.

Recovery time for a tonsillectomy is usually at least ten days to two weeks.

WHY IS IT DONE?

A tonsillectomy is used to treat: 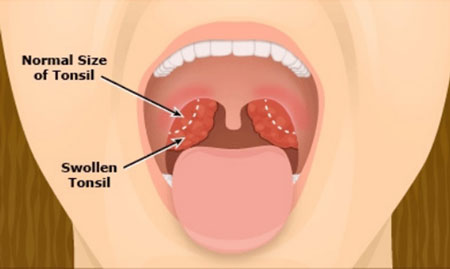 Tonsils produce certain types of disease-fighting white blood cells. Therefore, the tonsils act as the immune system’s first line of defence against bacteria and viruses that enter your mouth. This function may make them particularly vulnerable to infection and inflammation. The problem is more common in children because the immune system function of tonsils is most active before puberty. Also, unlike an adult’s immune system, a child’s system has had less exposure to bacteria and viruses and has yet to develop immunities to them.

A tonsillectomy may be recommended to prevent frequent, recurring episodes of tonsillitis.

Frequent is generally defined as:

The procedure may also be recommended if:

Tonsils may become enlarged after frequent or persistent infections, or they may be naturally large. A tonsillectomy may be used to treat the following problems caused or complicated by enlarged tonsils:

Other diseases of the tonsils

A tonsillectomy may also be used to treat other rare diseases or conditions of the tonsils, such as:

WHAT ARE THE RISKS OF HAVING A TONSILLECTOMY?

HOW SHOULD YOU PREPARE?

You’ll receive instructions from the hospital on how to prepare yourself or your child for a tonsillectomy.

Instructions for preparing will include the following:

WHAT CAN YOU EXPECT?

Tonsillectomy is usually done as an outpatient procedure. That means you’ll be able to go home the day of the surgery. However, you will need to stay for six hours after your procedure so you can be observed for bleeding.

An overnight stay is possible if complications arise or if the surgery is done on a young child, or if you have a complex medical condition.

Because a tonsillectomy is performed under general anaesthesia, you or your child won’t be aware of the procedure or experience pain during the surgery.

The surgeon may cut out the tonsils using a blade (scalpel) or a specialised surgical tool that uses heat or high-energy heat (electro-cautery / diathermy dissection) to remove or destroy tissues and stop bleeding. Another technique is “coblation”, which stands for controlled ablation, it involves radiofrequency at a low temperature and uses a saline solution to gently and precisely remove the patient’s tonsils by destroying the surrounding tissues that attach them to the  pharynx. Coblation is associated with less pain and a quicker return to normal diet and daily activity.

The procedure generally takes about 30 to 45 minutes.

Two weeks off school or work after tonsillectomy are recommended.

Nearly everyone experiences pain after a tonsillectomy. You will have a sore throat when you wake up and this can last for a few days, and can also increase during the first few days. The pain can take up to 10-12 days to disappear completely. Some patients have an earache after the surgery. This is because the tonsils share some of the same nerves. This is normal and should go away in about two to three days.

Steps that you can take to reduce pain, promote recovery and prevent complications include the following:

When to see the doctor or get emergency care

Watch for the following complications that require prompt medical care: