Mrs T . T. H, a 100 year old patient from Ho Chi Minh City, was promptly operated on by doctors of FV Hospital, when she was found to have a narrowed superior mesenteric artery which had stopped functioning. This caused the necrosis of almost all the patient’s entire small intestine. Thanks to the coordination of FV’s General Surgery, Imaging, and Vascular Surgery & Phlebology Departments, Mrs T.T.H. was able to receive the treatment she needed.

Visiting FV’s A&E Department with abdominal pain, the patient was examined by Dr Le Duc Tuan, FV’s General Surgery Department, and underwent a CT scan of the abdomen. Due to her age, being frail, and her history of cardiovascular and kidney diseases, however, doctors considered not using a contrast to avoid affecting the kidneys. In spite of the scan without contrasting, Dr Pham Dinh Khuong, FV’s Imaging Department, with years of experience in imaging diagnosis, suspected that the patient had a blockage in her upper mesenteric artery which was caused by lumen calcification and atherosclerosis.

Due to her chronic conditions and age, treating Mrs T.T.H.’s case was particularly difficult. Dr Le Tuc Tuan conducted an endoscopy to determine the necrotic intestinal segment and invited Dr Luong Ngoc Trung, FV’s Vascular Surgery & Phlebology Department, to hold a consultation in the operating room to make the decision on the surgical removal of the necrotic bowel. This exact and timely decision saved the patient through a critical crisis.

The patient was anesthetized, after laparoscopy, and doctors found that most of the small intestine was purple due to anaemia, with some areas also having necrosis. Dr Le Duc Tuan subsequently undertook a surgical procedure to remove over 1.5 meters of the intestines. After the removal, the doctor, accepting the risk of leaking, decided to reconnect the rest of the intestine, instead of exposing the intestine to make an artificial rectum. Dr Tuan explained, “If we made an artificial rectum, the intestine would be cut too close to the stomach which would mean that food would not be digested on time, causing burns to the skin and making the body not able to absorb any nutrition from the food”. Fortunately, after two hours, the operation was successful and the reconnected intestine recovered significantly. 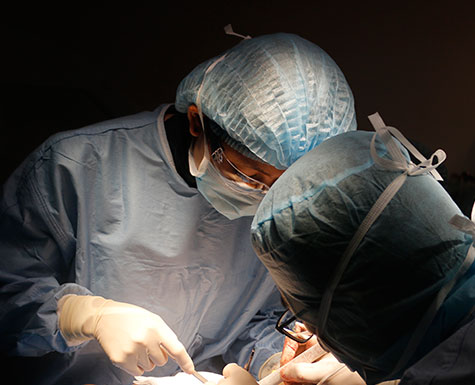 After the surgery, the patient was monitored and treated with active resuscitation for 10 days at FV’s General Surgery Department and her condition improved with no more abdominal pain. Now, the patient continues to receive medical treatment and uses anticoagulants to reduce the thrombosis that causes embolism. Overall, however, Mrs T.T.H.’s health has significantly improved. She can now sit, walk, eat and excrete normally.

Although the surgery was extremely stressful and challenging, with the extensive surgical experience in reconnecting parts of the intestine, as well as the assertiveness and the support of Dr Luong Ngoc Trung, Dr Le Duc Tuan was able to handle the complicated case quickly and help the patient escape death.

Dr Le Duc Tuan, FV’s General Surgery Department, shared “The blockage of the superior mesenteric artery is an obstruction of the intestinal artery that prevents blood from reaching the small intestine, causing necrosis. This is a very rare disease, with a high mortality rate, and diverse symptoms, which means it is difficult to diagnose and easy to ignore. There are many causes of mesenteric embolism such as atherosclerosis, heart clots, vasculitis, among others. Such conditions can cause blood clots which become stuck in the intestinal arteries. The disease often begins with atypical abdominal pain, which may be accompanied by gastrointestinal disturbances for the patient”.

Dr Luong Ngoc Trung, sharing on the reasons why he decided to not perform surgery to place a stent to make a circulatory system, said: “For a 100-year-old patient, the longer the surgery, the higher the risk of mortality. Additionally, the patient has a number of severe underlying diseases such as heart disease, asthma, kidney failure, etc. Therefore, the preferred choice in such circumstances is to cut only the necrotic areas through enteroscopy, using anticoagulant drugs and by stabilizing the blood pressure to prevent anaemia”.

At FV Hospital, in addition to the modern equipment and the highly specialized and dedicated team of doctors, specialist collaboration is also a prominent feature in the ensuring of successful diagnosis and treatment. With this combination, the right treatment strategy can be implemented to help patients receive the most effective treatment.