V.M.B is at an age typically associated with vitality, but instead he has been focused on fighting for his life against malignant blood cancer – a fight that has inspired medical teams at two hospitals to cooperate. For the first time, total body radiation therapy (TBI) was applied in Vietnam to help B. fulfil his desire to live.

A teenager’s will to live

In March 2019, V.M.B (born in 2005, Go Vap District, Ho Chi Minh City) suffered from headaches and stomachaches accompanied by a fever and the feeling of being cold every afternoon. After a while, the discomfort spread from B.’s head and abdomen to his joints and became increasingly painful. Diagnostic tests at a hospital in Ho Chi Minh City revealed that B. had blood cancer. 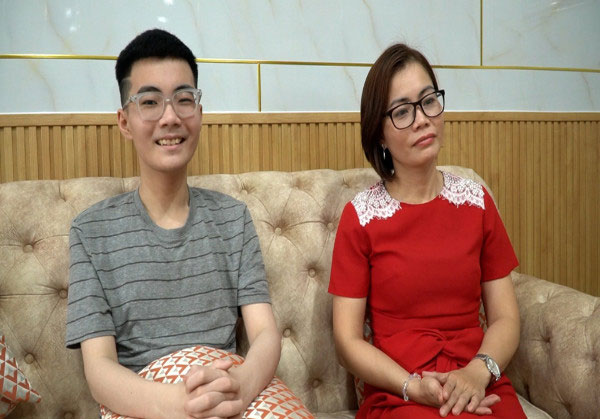 M.B. and his mother recount the journey of fighting blood cancer

Ms T.D., B.’s mother, said her family was shocked to learn her son was terminally ill. But after discovering that blood cancer has a remarkably high cure rate, T.D. and B. became more optimistic. B. was transferred to a leading haematology hospital in southern Vietnam to begin treatment for blood cancer.

After a year of dedicated care, B. was discharged at the end of 2020 from the hospital and returned to school. However, after a while, his headaches and joint pain suddenly returned. B.’s cancer had relapsed: he had leukaemia. T.D. and B. dealt with this new blow and B. started treatment again from square one, enduring constant tormenting pain—even a slight movement brought tears to his eyes. Tragically B. also had to undergo hip replacement surgery due to gangrene. Fortunately, the surgery was successful, helping him to walk normally. Longing to live, B. tried to overcome his pain and fear to continue fighting against his malignant disease.

B.’s arduous journey to win his chance to live continued. The chief doctor of the paediatric department at the hospital where B. was receiving care told the family that B. needed a bone marrow transplant. However, because B. had acute lymphoblastic leukemia, if he did not receive radiation therapy via the total body irradiation (TBI) technique first, receiving a successful bone marrow transplant was unlikely.

Ms D. recalls: “In Vietnam at that time, no hospitals applied the TBI technique. FV Hospital had the capability to deploy this technique but hadn’t completed the process of applying for approval to perform it.”

As T.D. was about to carry out procedures for B. to go to Taiwan for treatment, both were infected with Covid-19, and it was impossible to travel abroad. “Fortunately, when we had recovered from Covid-19, FV Hospital was able to offer TBI.” 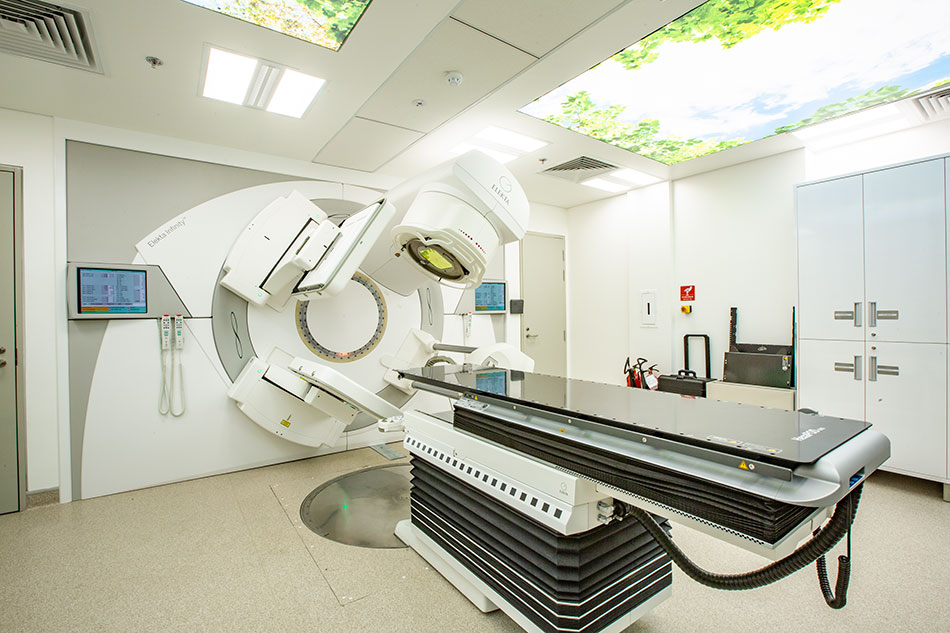 Ms D. and her son met with Dr Basma M’Barek, Head of Hy Vong Cancer Care Centre, FV Hospital, who carefully advised them about TBI therapy. TBI is a high-tech method of radiation therapy, when the whole body is treated with radiation at a low dose—just enough to destroy bone marrow cells and any remaining cancer cells, and at the same time, limit damage to other tissues so they can heal normally. For a bone marrow transplant to be successful, the transplant patient needs to take medication that suppresses the immune cells in the body. When not combined with systemic radiation therapy, bone marrow transplant patients must typically use high-dose chemotherapy to kill cells and suppress the immune system, but in some cases, this methodology does not work. Systemic radiation therapy is more effective at killing cancer cells in the body and also suppresses the immune system to help prevent bone marrow transplant rejection later on with fewer side effects. With careful advice from Dr Basma doctor, T.D. and B. knew that this was the best option of securing B.’s future.

At the end of March 2022, Dr Basma and Hy Vong Cancer Care Centre team conducted B.’s full-body radiation therapy. For two hours a day for three days, B. received radiation therapy from his fingernails to hair roots to ensure no cancer cells endured. B. responded well to the regimen and all cancer cells were destroyed.

On April 11, B. returned to the hospital that had been treating him previously so that the doctors could perform the bone marrow transplant procedure. On May 30, B. was discharged from the hospital. After more than six months, B.’s health is stable and recent tests show no presence of cancer cells in the body.

Ms T.D. believes it was the cooperation between FV and another hospital that helped B. win his fight against what is often an incurable disease. “The fact that B. could access total body radiotherapy in Vietnam was great luck. B.’s treatment costs were much lower compared to those we would have incurred by going abroad for treatment; at the same time, he and I did not have to navigate being in an unfamiliar environment with a different language. The affection of the doctors at the two hospitals really warmed my heart,” says Ms D.. 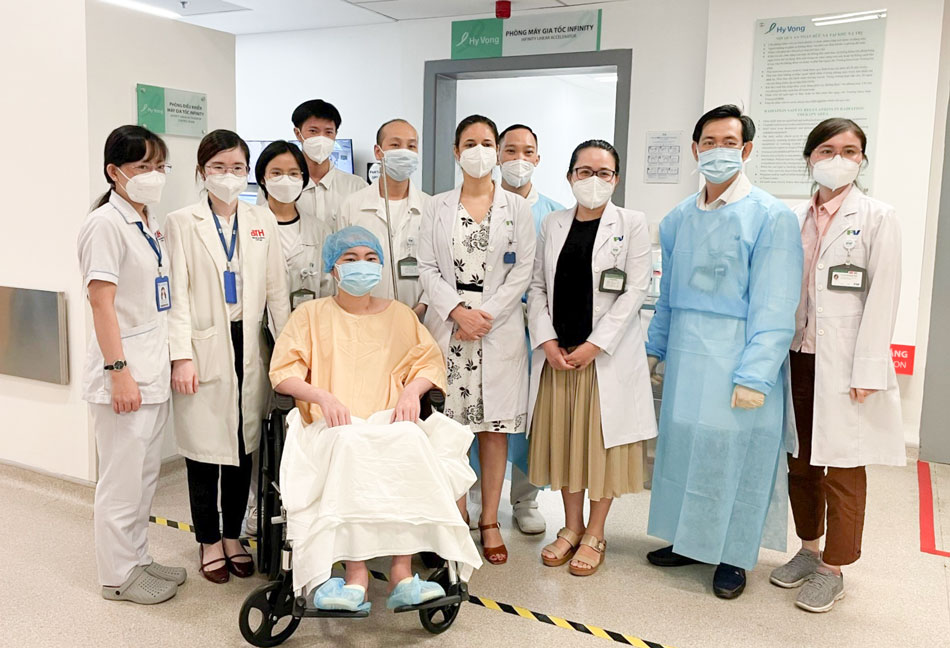 B. and the team of doctors at Hy Vong Cancer Care Centre, FV Hospital, after completing B.’s radiation therapy

On October 21 and 22, 2022, Dr Basma M’Barek shared a report on M.B.’s case at the sixth Vietnam-France Conference on Blood Transfusion, Bone Marrow Transplantation and Hematopoietic Stem Cells, held in Quy Nhon City, Binh Dinh Province. The conference was attended by more than 400 delegates made up of leading professors, doctors, pharmacists, technicians and nurses from hospitals across the country, and more than 30 speakers, all highly respected educators, doctors and experts in stem cell transplantation from all in the world. Experts praised FV Hospital’s contribution to the success of this bone marrow transplant, emphasising that radiotherapy via TBI poses almost no side effects. 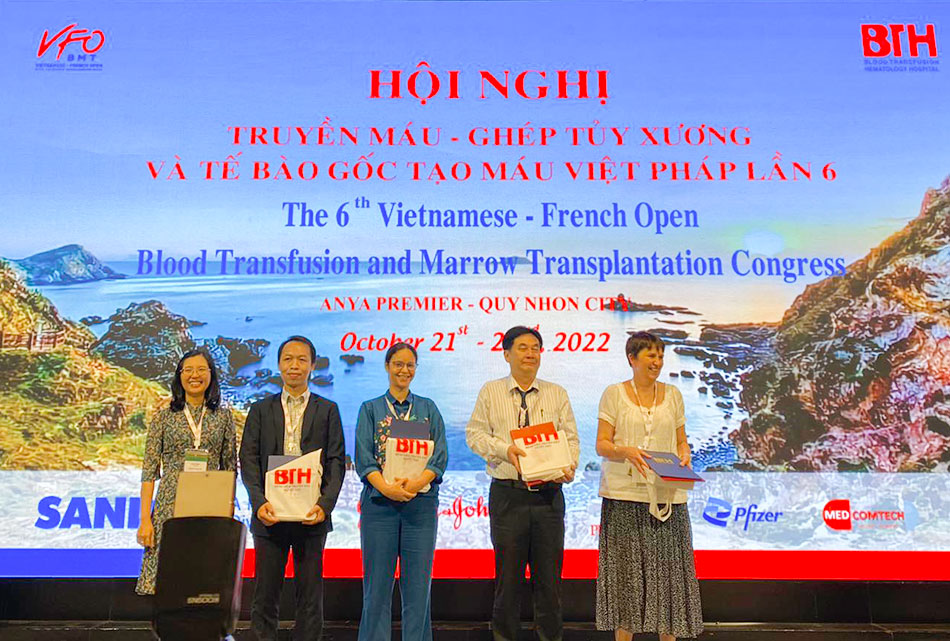 At the conference, Dr Basma also pointed out the challenges of implementing TBI in Vietnam. This is a high-tech regimen and very new in this country. To perform it requires a team of highly trained oncologists, technicians, nurses and physical engineers who have skills in this field. In Europe and some other countries, TBI radiotherapy techniques are currently concentrated in a few centres because treatment is time-consuming and needs a specialized team. This is also a direction worth considering in Vietnam. “At FV Hospital, we are ready to cooperate with bone marrow transplant teams and haematologists to close the technology gap and offer Vietnamese patients the best treatment methods available anywhere in the world,” Dr Basma shared at the conference.

“This successful treatment has a special significance: not only because it saved a young patient’s life, but also marked the moment that we became armed with one of the world’s most advanced anti-cancer weapons to deploy for patients in Vietnam,” adds Dr Basma. Attending doctors also celebrated this positive result following the successful cooperation between two hospitals in Ho Chi Minh City.