Dr Bui Nhuan Quy: Pursuing a career in medicine and becoming a Doctor was a natural journey, filled with inspiration

For Dr Bui Nhuan Quy, Head of Gastroenterology and Hepatology Department at FV Hospital, choosing a medical profession has been filled with experiences and interesting discoveries. And while Dr Quy believes that he’s benefitted from a great deal of luck along the way, it’s important to remember that luck doesn’t often comes to those who don’t apply themselves to their work.

Staying focused on the path to becoming a doctor

Dr Bui Nhuan Quy came to the medical profession after a single remark from his high school literature teacher struck home. She said he looked like a doctor, and this simple sentence made 18-year-old Quy think for several days. For many years he had only been interested in subjects related to math and physics, but he resolved to pursue a career as a physician. “In the final year of high school, before the university entrance exam, I had never considered studying medicine,” he recalls, with a smile. Upon graduating medical school, Dr Quy was accepted at a large public hospital and spent more than 15 years working within a single specialty. 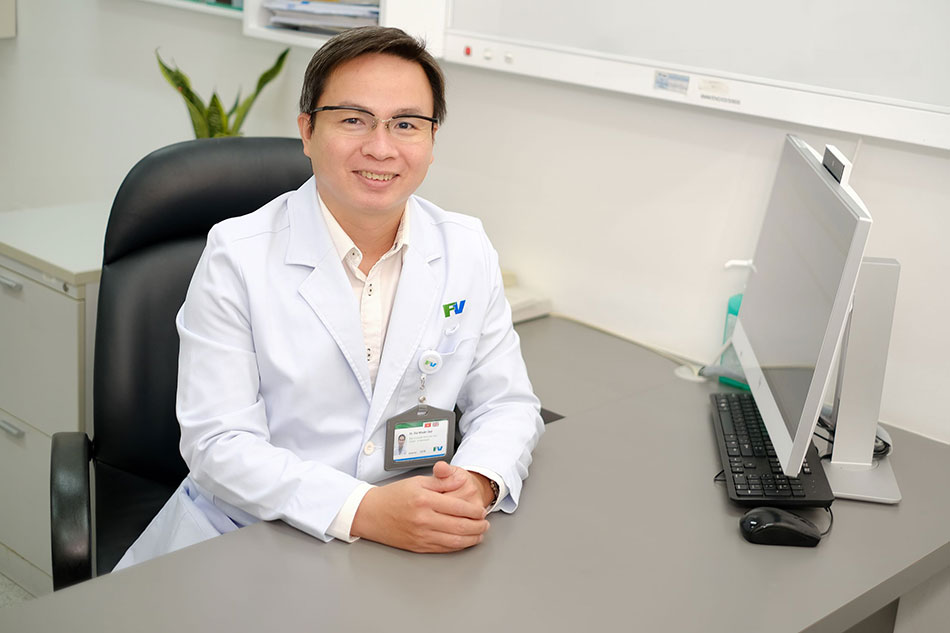 Dr Bui Nhuan Quy, Head of the Department of Gastroenterology and Hepatology, FV Hospital, exudes an air of calm confidence.

No one else in his family has chosen a medical career, and since graduating from college, Dr Quy has constantly explored his professional interests and passions. He learned from hard work and mentors in his field, investing more than 10 years in his efforts without taking a day off. “I know that by doing a good job, I will earn the trust of others, and be able to take on more worthy responsibilities,” says Dr Quy of his work ethic.

His composure and confidence in his skilfully earned abilities has made Dr Quy a highly sought after specialist in the field of endoscopic retrograde cholangiopancreatography (ERCP). When talking about Dr Quy, his patients always comment on his gentle and kind demeanour, both while working and in his general interactions.

Constant self-improvement to help many people

Although giving the impression of being slow, methodical and somewhat quiet, Dr Nhuan Quy has spent many years being actively involved in many professional groups and associations connected to his medical school, Gia Dinh Hospital and the Department of Health of Ho Chi Minh City. “In addition to developing professional skills, I know that social skills are also important in understanding the concerns of patients and colleagues. I seek out who can effect change to solve obstacles in the workplace and daily life,” adds Dr Quy.

Initially, Dr Quy pursued social activities to help him overcome his natural shyness. But gradually, confidence, humour and the opportunity to meet many people in the same field changed his perspective. He says that travelling to new places and meeting lots of new people helped him not to be afraid to express his wishes and views in front of his seniors as a young doctor, to confidently speak up when he saw issues affecting patients, and to be open to more options for his future career. Taking time to participate in social activities also helped Dr Quy learn how to put patients at ease when performing procedures.

Choosing to join FV Hospital was probably the most difficult decision of Dr Quy’s career. “It had taken me one week to decide to become a doctor, but it took me many months to choose FV as my workplace. I hope that at FV, I will have more time to focus on deepening my expertise,” Dr Quy shares about this turning point in his career.

This decision also brought Dr Quy consistency and stability: he has more time to spend with his family and to study medical developments, and he can also devote more time to guiding young doctors who are interested in gastroenterology-hepatobiliary diseases, especially those interested in practicing ERCP.

Dr Quy’s methodical approach and cool composure are well suited to his specialty as an endoscopic retrograde cholangiopancreatography (ERCP) specialist.

FV Hospital’s Medical Director Do Trong Khanh, MD, PhD, shares: “Dr Quy has held several senior positions at large hospitals, and has both the experience and maturity to lead his department while also having the enthusiasm to implement innovations at FVH.” Dr Trong Khanh also noted that FV’s recent investment into equipment and management platforms will enable Dr Quy to confidently deploy sophisticated techniques at the Hospital’s Gastroenterology and Hepatology Department, especially those involving endoscopy.

Dr Quy says that while the current approach to treating digestive diseases in Vietnam is always progressing, the general standard of care available to most Vietnamese people is far behind the rest of the world. Dr Quy is keen to contribute to closing that gap, and to leverage FV Hospital’s domestic and international relationships with centres such as Cho Ray Hospital and Asian Institute of Gastroenterology (AIG), a famous hub for endoscopy in India, to ensure FV’s gastroenterologists complete ongoing training to improve their skills.

Dr Bui Nhuan Quy often says that the story of his commitment to the medical profession owes more to luck and happy coincidence than hard work. But luck is always a meeting between opportunity and preparation, and Dr Quy’s sociable, open-minded attitude has undoubtedly opened up many opportunities for him throughout his career. Dr Quy is a person who always considers decisions very carefully, understands his weaknesses and then overcomes them. His sense of grit will continue to ensure Dr Quy is successful in everything he chooses to pursue.

Dr Bui Nhuan Quy: Pursuing a career in medicine and becoming a Doctor was a natural journey, filled with inspiration