The Electrophysiology & Liver transplant symposium took place on 23rd July 2022, with the participation of doctors working in Ho Chi Minh City and neighbouring provinces. This symposium was the first step marking the cooperation between FV Hospital and AIG Hospital (India). 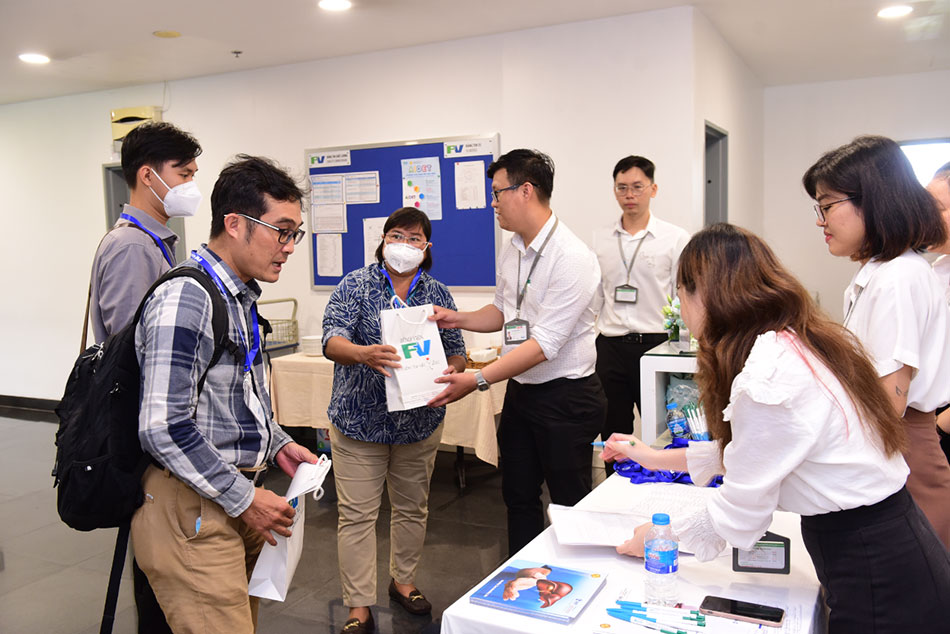 Opening the workshop, the Medical Director of FV Hospital, Dr Do Trong Khanh who expressed his appreciation for the symposium and for the participation of leading Asian experts and doctors in the electrophysiology, treatment and liver transplant surgery from AIG. Dr Khanh said: “Both fields in this conference are in the initial development stages in Vietnam, while in India; specifically at AIG hospitals, have achieved much progress. AIG is an experienced hospital that is in a great position worldwide. As such, we strive for cooperation with AIG to help Vietnamese and FV doctors access advanced treatment techniques in the future” 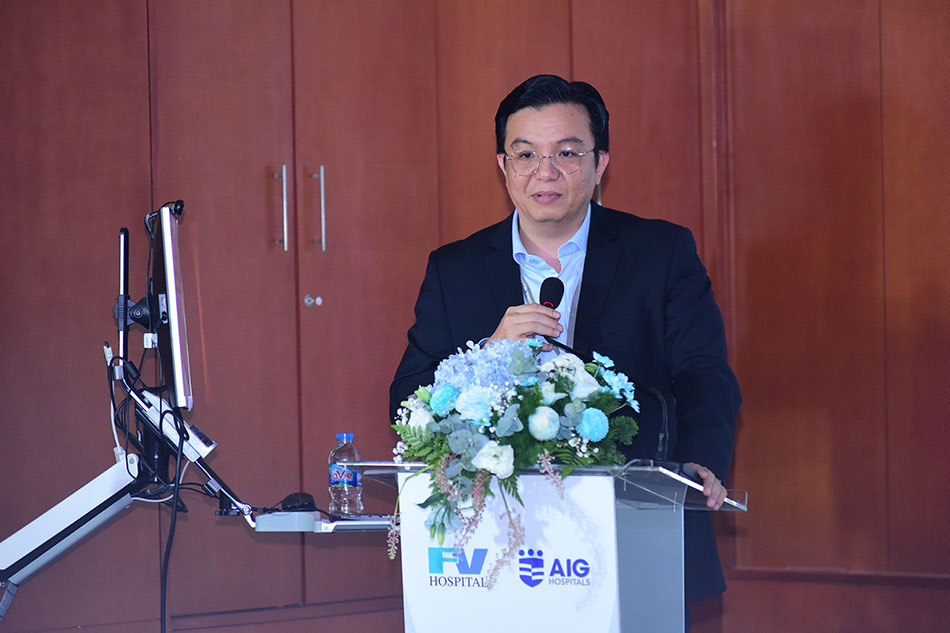 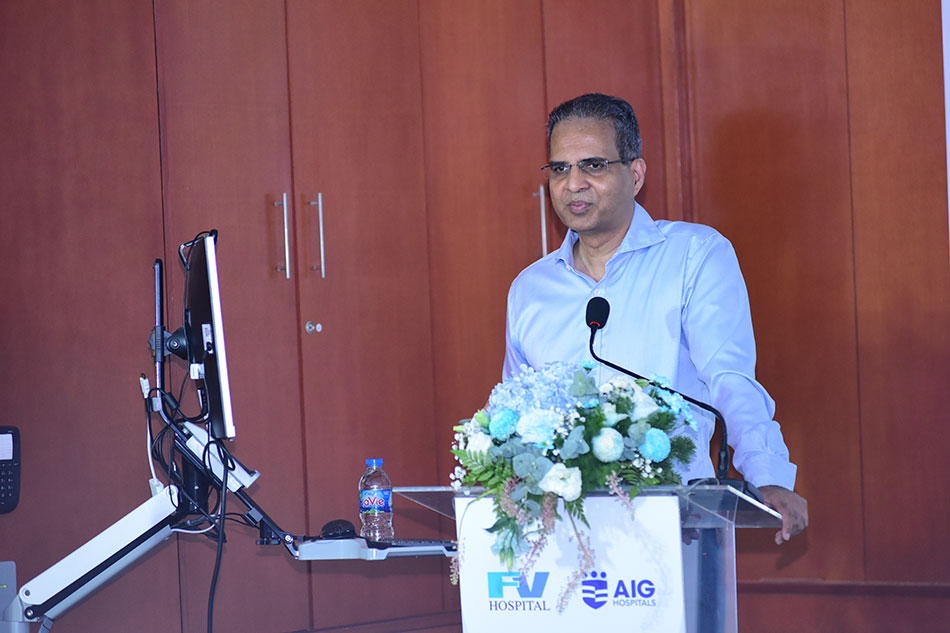 In his presentation, Founder, Chairman, and Chief of Gastroenterology, AIG Hospitals, India, Dr D. Nageshwar Reddy and Medical Director of AIG Hospital, Dr P. Naveen Reddy discussed the professional operation at AIG. The two leaders of AIG especially emphasised the importance of cooperation in development, through symposiums, scientific research, or medical technology transferring. “We highly appreciate this symposium and look forward to the developments following it. They also noted the similarities in the hospital development philosophy of FV and AIG. The speakers from AIG are not only leading experts in India, but also world-class in their fields,” said Chairman D. Nageshwar Reddy. 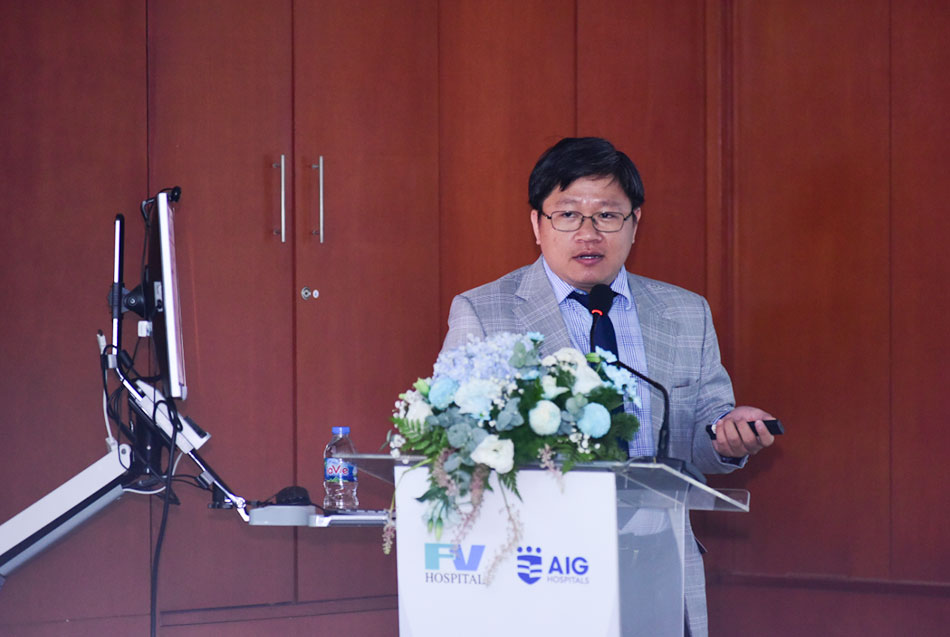 Following the programme, Dr Bui Gio An (Head of Cardiac Rhythmology Unit – Cardiology Centre, Children’s Hospital 1) presented “Indications and efficacy of RF arrhythmia intervention in children”, a technique that is not yet been widely accessible in Vietnam. According to Dr An, arrhythmia in children is a complex field, currently only a few doctors pursue. In Vietnam, there are only 2 centres performing these interventions. Even in the world, the field of arrhythmia treatment for children has only received research attention in the last 10 years. Arrhythmia cases in children are increasingly complex and more difficult to treat, but the success rate of treatment is relatively high and has long-term effectiveness. 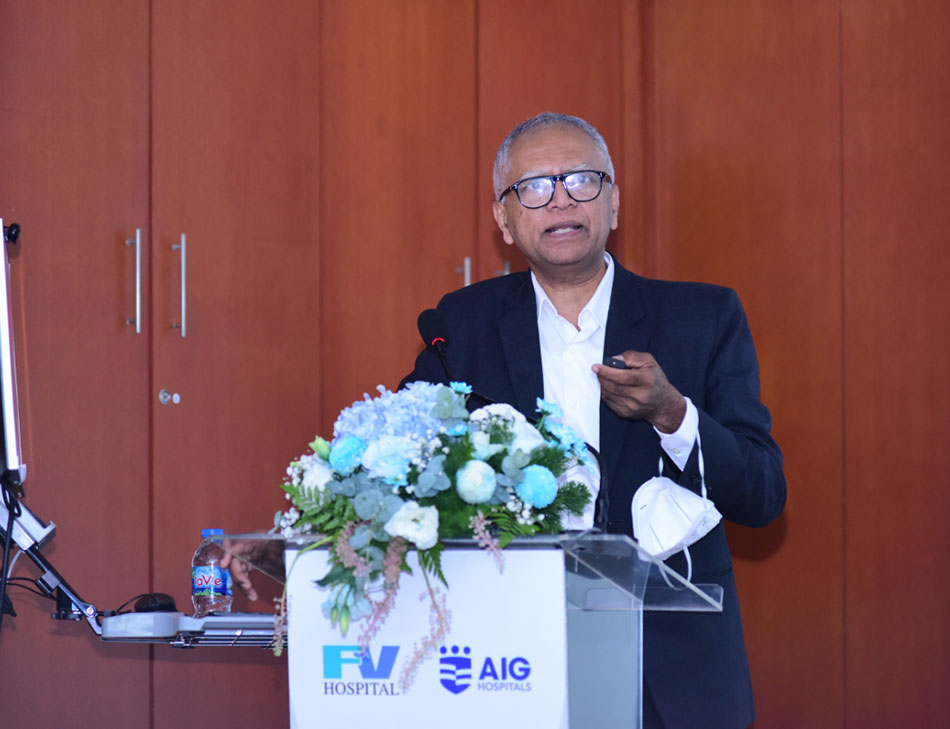 Dr C. Narasimhan said that arrhythmia is a common condition in the next 2 decades In the final report of the first session, Dr C. Narasimhan (Chief of Electrophysiology & Senior Consultant Cardiology at AIG Hospitals), who is one of the pioneers in the electrophysiology field in India. The presentation started from general and moved into a detailed explanation of heart rhythm pathology. He stated that in the next 20 years, arrhythmia will become a problem for the world health. Dr C. Narasimhan presented several ways for a comprehensive assessment for early diagnosis and treatment of arrhythmias. He also suggested treatment techniques from both a medical and surgical approach, for each specific case and recommended that doctors should be mindful for each indication. 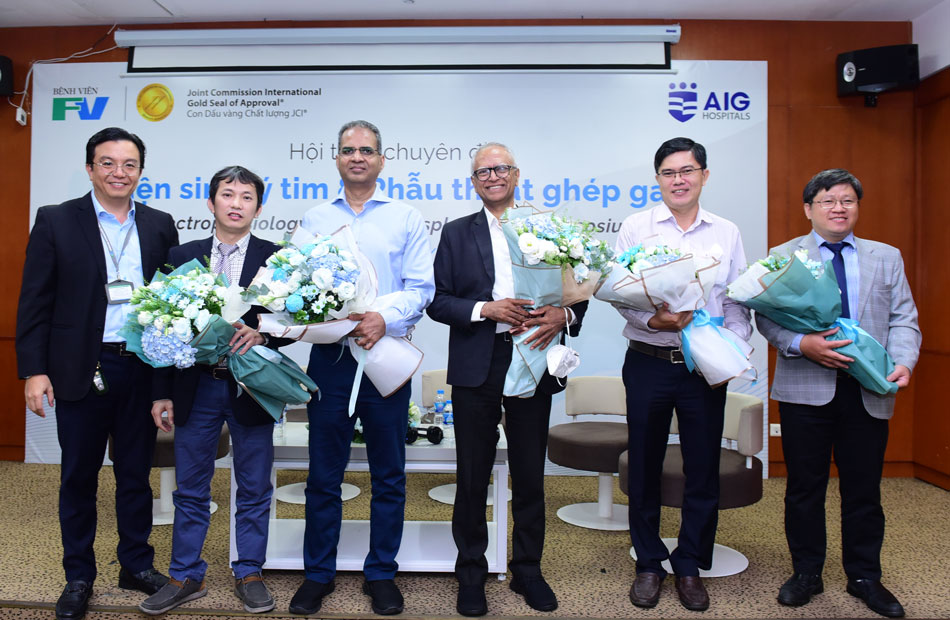 The organisers thank the speakers in session 1

The development of the current liver transplant technique

The second session of the symposium was moderated by Dr Bui Nhuan Quy (Head of Gastroenterology & Hepatology Department of FV Hospital). The focus of this session was a method for liver transplantation surgery, that has been proved to increase survival with better life quality for post-treatment liver patients. 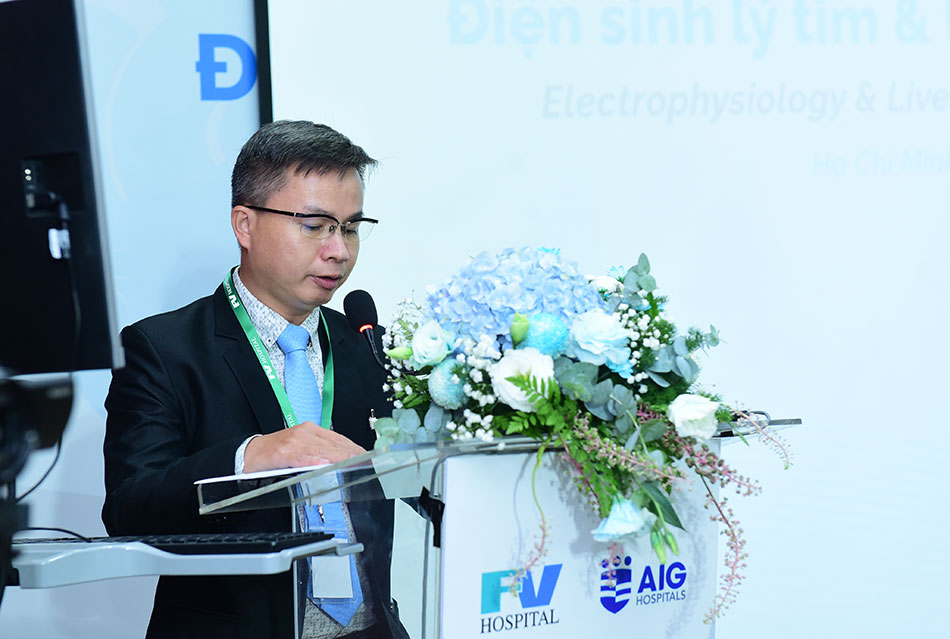 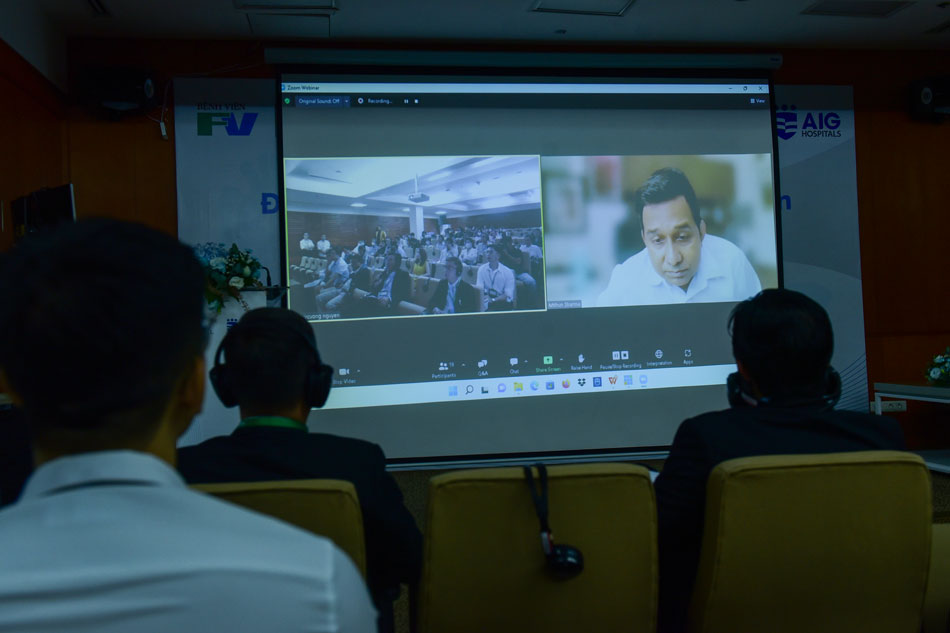 The first report in this session was conducted online, via the Zoom, by Dr Mithun Sharma (Director of the Liver Centre & Regenerative Medicine – Senior Consultant on Liver Transplant at AIG Medical Centre). Through the report, he affirmed, alcohol is now a problem not only in India but also globally. Dr Mithun provided tools and guidelines for diagnosing alcohol use disorders (or alcohol abuse and dependence) and predicting potential liver damage through biopsy. Finally, he presented his research and experience with medical indications in the treatment of alcoholic liver disease. 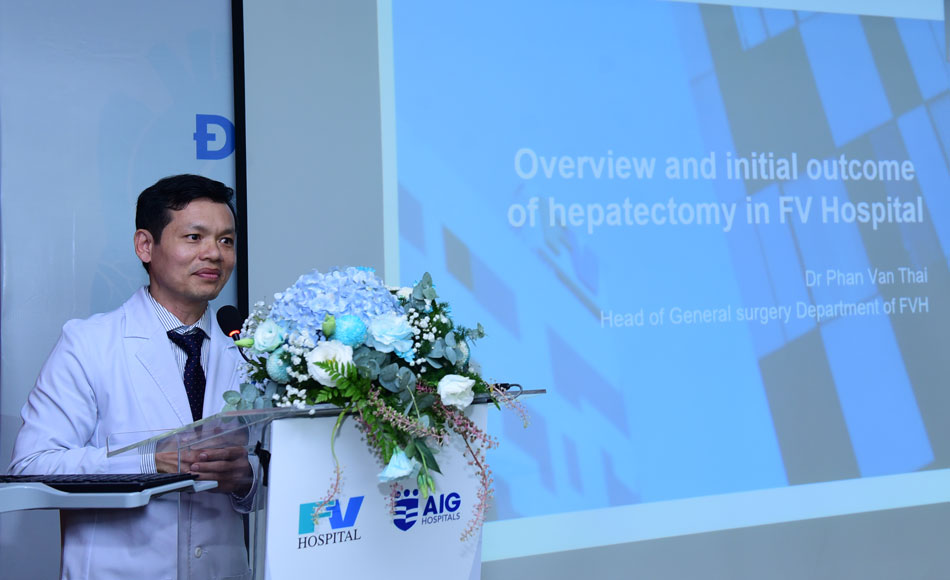 The report of Dr Phan Van Thai followed where he showed an overview of liver surgery at FV, and the plans to develop surgical techniques for liver diseases. Starting in 2003, FV Hospital has performed liver resection surgeries performed by a team of French and Vietnamese doctors. By 2016, this technique had been performed entirely by Vietnamese doctors. In the near future, FV will also invest in developing the team and equipment for liver transplant surgery, with support from AIG Hospital. 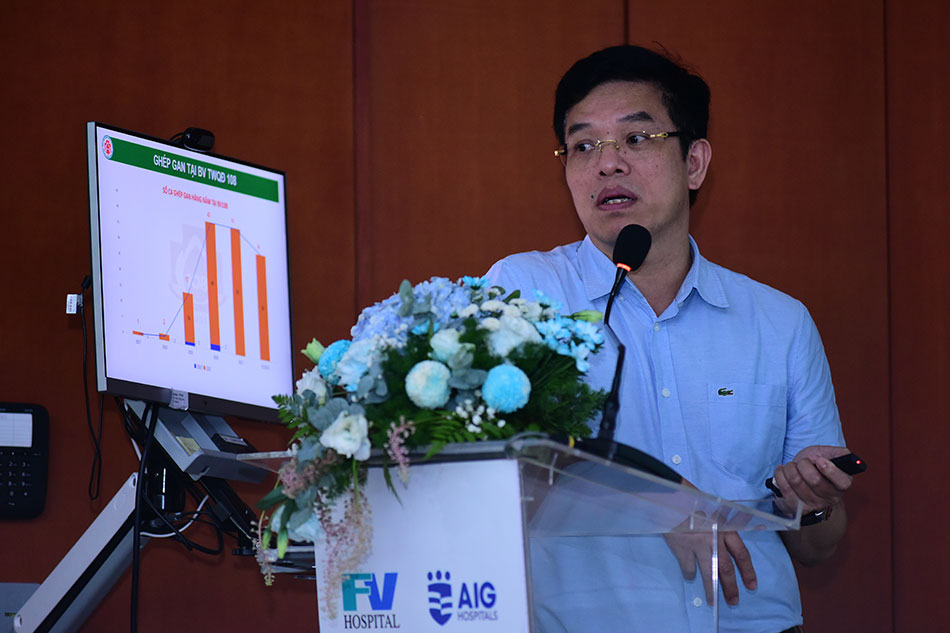 In the last two presentations of the conference, one of Vietnam’s leading experts on liver transplantation, Dr Le Van Thanh (Head of Gastroenterology & Hepatology, 108 Military Central Hospital), and a world-class expert who has participated in more than 3,000 liver transplants, Dr P. Balachandran Menon (Director of Liver Transplant, AIG Hospitals, presented the latest developments and developments in liver transplantation techniques in Vietnam. and India, as well as the overall situation throughout the world. Thereby, both experts showed benefits for patients receiving liver transplant treatment. At the same time, it also pointed out the difficulties in managing the quality of donated livers, controlling the effectiveness of surgery, and ensuring the correct classification and designation of people to be treated in the situation where organ donation is scarce. 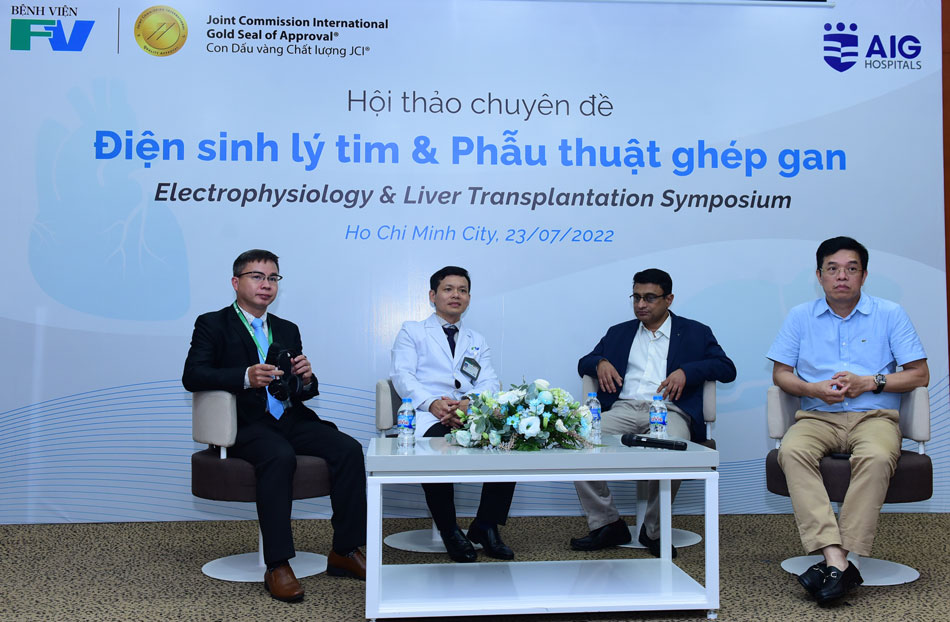 Session 2 of the symposium received many questions from attendees 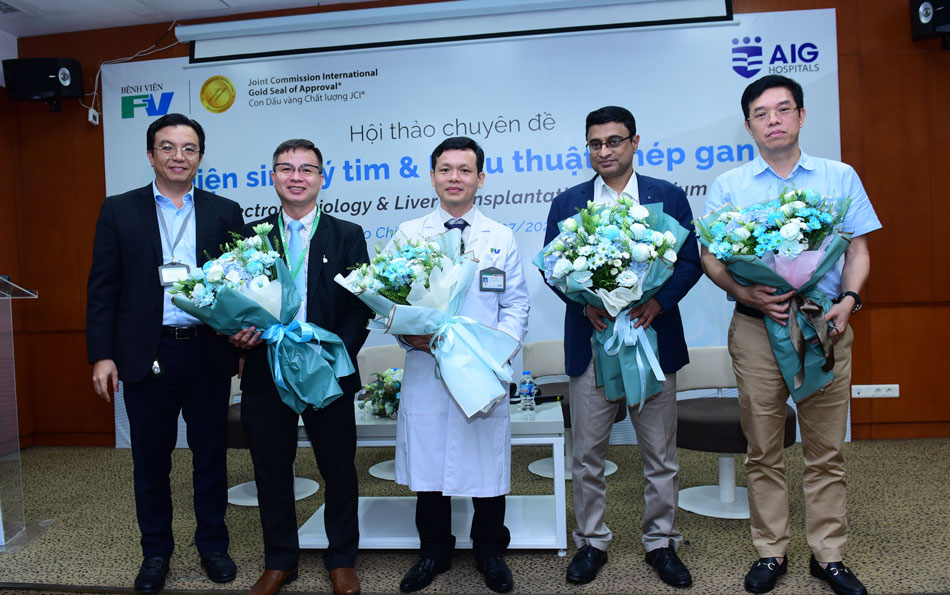 The organizers thank the speakers of session 2

The symposium on Cardiac Electrophysiology & Liver Transplantation brought new and useful knowledge to the doctors in attendance. Thereby seen as the first step, opening up for the upcoming cooperation steps between FV Hospital and AIG Hospital in particular, as well as between Vietnamese medicine and Indian medicine in general. In the end, it shall bring the benefit of effective treatment for patients, thanks to modern medical techniques delivered at reasonable costs right here in Vietnam.