Ignoring Insect Bites and Stings Can Be Life-Threatening

Most insect bites and stings are harmless and will disappear after a few days. However, in some cases, they can become infected and lead to life-threatening complications. When she was about to be discharged from the hospital, Ms L.G.B. Langerveld (24 years old, Dutch),  felt that the situation she had just undergone was strange and also that she had been very lucky. 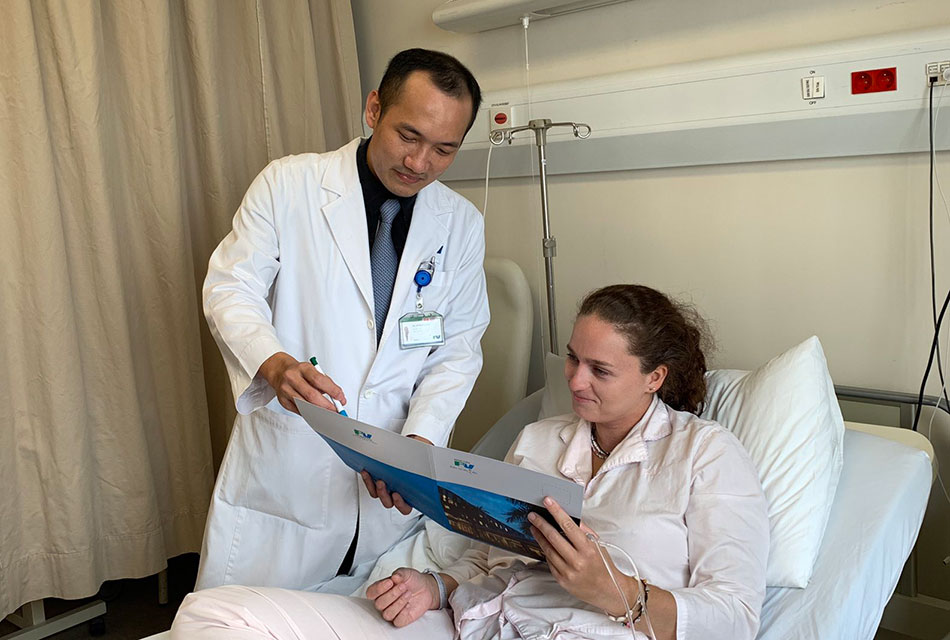 From small stings to sepsis

Last month, Ms Langerveld took a solo trip to Koh Rong Island, Cambodia, before travelling to Vietnam to continue her tour around Southeast Asia. She said that while exploring Koh Rong, she was stung and bitten by insects, but the sores were all very small.

After a few days, small blisters began to appear all over the body. A sting on her lower leg had spread into the surrounded tissue and had developed into a deep ulcer which oozed pus. Ms Langerveld also felt tired and had a mild fever. Given that these signs can be typical after a period travelling, she didn’t worry. Langerveld said: “At first I thought it was normal reaction, so I went to the pharmacy and bought a topical cream, applied to the stings. But after that, things got worse.” While most the small boils had subsided, her foot ulcer became more severe.

After looking up hospitals in her travel guidebook and asking advices from friends, Ms Langerveld visited FV Hospital to get her leg wound checked out. During the initial examination, the doctor assigned a surgical excision to remove the necrotic tissue, collected fluid and a blood sample and performed blood tests to develop a more accurate assessment of her condition.

Ms Langerveld’s blood culture test was positive for three types of bacteria. Dr Le Quang Huy (Department of Orthopaedics and Hand Surgery, FV Hospital), who was directly in charge of this case, said: “Luckily, the patient arrived at the hospital for a timely check-up. If she had delayed her visit another week, her condition was likely to lead to life-threatening complications from sepsis, such as coagulopathy, septic shock or multi-organ failure.” Staphylococci and streptococci often cause infections and mild inflammation on the skin, but can lead to very serious complications after entering the bloodstream and reaching the internal organs.

Do not overlook strange wounds

Immediately after receiving the results, at 3:30 a.m. on the same day, Dr Le Quang Huy phoned Ms Langerveld to suggest she be admitted to the hospital for timely treatment. Ms Langerveld was prescribed high-dose antibiotic therapy, haemodynamic support, and close monitoring to promptly detect and prevent possible complications. Ms Langerveld is a nurse, and noted how the treatment options at FV were the same as the hospital she works at in the Netherlands.

The treatment process includes a close coordination between internal medicine, which selects the most appropriate medicine and calculated dosages, and the surgical department, which cleaned and redressed infected wounds every day with the use of local anti-infective absorbent gauze. This effective collaboration helped Ms Langerveld to recover. Her test results quickly returned to normal, her blood cultures were negative for pathogenic bacteria and the patient was discharged from the hospital after only five days of treatment.

Ms Langerveld commented that she felt extremely lucky and was very glad that she decided to visit FV to get her wounds looked at. Not only did she receive world-class treatment, but also felt extremely comfortable as she was able to talk in English with her nurses, which helped her to feel almost like she was at home. “I think the doctors and nurses did the best they could for me with great care here,” says Ms Langerveld.

Following this case, Dr Le Quang Huy recommends that patients should not be careless after being bitten or stung, especially while on the road. Symptoms of common stings include local swelling and itching, and our impulse to scratch the sting further damages the skin and introduces bacteria from the hands into the wound, causing infection.

In addition, we should take care to self-monitor our health to detect unusual symptoms such as fever, aches, systemic allergic reactions, painful swelling of nearby lymph nodes or widespread cellulitis. If you have these symptoms, you should immediately seek medical treatment from professional hospitals for timely, accurate diagnosis and treatment. Do not self-medicate without a proper diagnosis or without the advice or instruction of a doctor or medical practitioner to avoid serious complications.

After this dangerous situation was resolved, Ms Langerveld shared: “I have never experienced anything like this in my life. I came to Vietnam alone so I really appreciate what the medical staff at FV have done for me.” After being discharged from the hospital, she was ready to continue her tour in northern Vietnam. She is also very excited for the journey ahead, as her first impression of Vietnam is a healing one.

2/ Wash the area with soap and clean water.

3/ Elevate the limbs if there is much swelling.

5/ Consider getting a tetanus antitoxin shot at the nearest hospital.

Ignoring Insect Bites and Stings Can Be Life-Threatening