As part of FV’s quality journey following JCI accreditation in 2016, the hospital has launched its 5S programme. 5S, which has its roots in Japan, has been implemented in many businesses around the world and is based on the principle that small actions lead to greater efficiency. 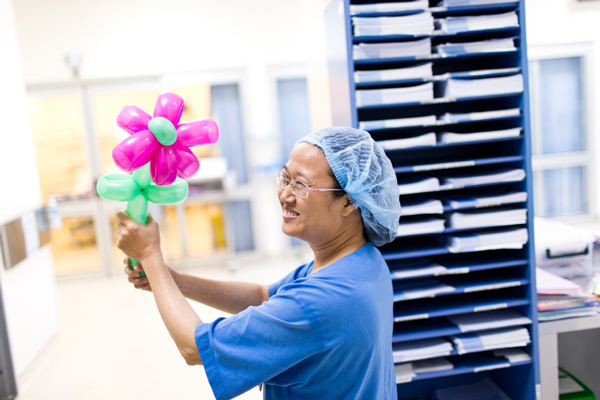 5S stands for Sort, Set, Shine, Standard, Sustain. Realising how 5S can be beneficial to improving the quality of work and contributing to patient confidence, FV’s Board of Directors has resolved to apply this model from the beginning of 2017.

A Project Committee has been formed, comprising staff from Human Resources, Quality Assurance and the Facility Department, under the leadership of FV’s COO Ms. Pham Thi Thanh Mai.

“It’s difficult to change deep-rooted habits, but if we manage to make 5S work, it will become a very effective tool for boosting productivity,” shared Nguyen Duy Nhat, the person in charge of implementing 5S, an infrastructure for creating a hygienic, ordered working environment at FV Hospital through the application of quality management systems for businesses.

The first two 5S pilot departments are ICT and Surgical Ward. Talking about this choice, Ms. Duy Nhat explained that ICT represents the hospital’s administration sector, while FV’s Surgical Ward represents the clinical staff which works directly with patients. Both departments have a particular scope of work, so if 5S works here, we can be confident that 5S is suitable for implementation, hospital-wide.

The first two 5S pilot departments are ICT and Surgical Ward. Talking about this choice, Ms. Duy Nhat explained that ICT represents the hospital’s administration sector, while FV’s Surgical Ward represents the clinical staff which works directly with patients. Both departments have a particular scope of work, so if 5S works here, we can be confident that 5S is suitable for implementation, hospital-wide.

To prepare for the official launch on 10 January, 2017, the Project Committee invited specialists to train 30 middle managers two months in advance. This group of managers then trained their own team, which followed up by deep-cleaning within the hospital before the Lunar New Year holiday. The next step involves sorting and numbering all machinery and equipment; rearranging desks, removing or relocating non-essential items in order to save space and creating a more open working space. 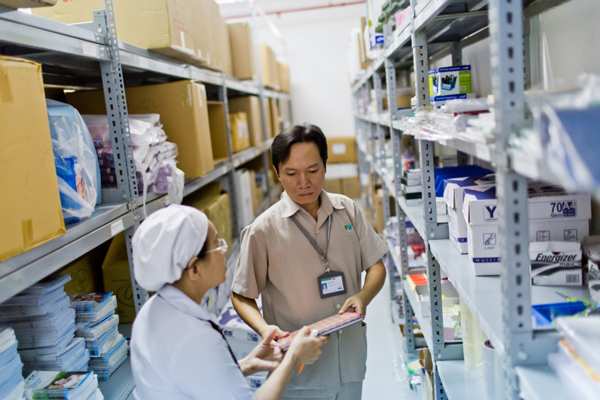 “This is not an assignment that can be completed overnight. Instead, it requires each individual to practice constant awareness for long-term, lasting maintenance. There’s a word in Japanese, ‘Kaizen’, which means the practice of continuous improvement for the better. I believe that if everyone stands in solidarity for change, 5S will definitely be successfully applied,” shared Duy Nhat.

At the Surgical Ward and ICT departments, although 5S has been in progress for a mere 10 days, the effects it is bringing about are remarkable. Ms. Nguyen Thi Hien, Head of Nursing at the Surgical Ward and who is also in charge of implementing 5S there, proudly shows us the photos so that we can see the differences before and after 5S for ourselves.

Archives shelves have reduced significantly and are more neatly arranged. The sorting of documents has started to follow an established standard that avoids the inconsistent usage of numbers and letters like before. Medical stethoscopes are also clearly numbered. “Previously, I used to distribute stethoscopes to the nurses randomly and don’t know to whom each one was assigned. When any stethoscope was misplaced, it made it very difficult to trace where each had been. Just a small act to number the stethoscopes makes managing our stock much easier,” Ms. Hien said.

She recalled the first days when a surgical specialist entered the Surgical Ward and began to photograph everything, but refused to reveal the reasons. Then came the first training days, when simple tasks such as finding the missing number in a sea of clutter were assigned to demonstrate that in a orderly environment, problems can be solved much more easily. Ms. Hien communicated everything she learned to her colleagues in her department, most of which are young people who pick up new knowledge very quickly.

Due to its particular scope of work which doesn’t follow any specific protocol, the ICT Department is being more cautious in embracing 5S. Mr. Tran Quoc Vu, the person in charge of 5S at ICT, reveals that the nature of ICT work is not paperwork-based, while technical issues are broadly diversified. To solve a problem, technicians sometimes have to dissect the entire machine, so it is hard to always keep things neat and tidy.

However, in a great attempt to create an open work space for everyone, the ICT team sat down together to agree on how best to implement 5S, starting from the first simple steps of rearranging seating, reordering inventory and tossing out unnecessary things. Mr. Vu also worked on numbering tools and arranging a specific space for repairing machines to avoid disturbance to the whole room.

5S originates from Japan and aims to create a tidy workspace, helping to improve the quality of work. This model has been applied effectively in many countries, with every nation finding a corresponding word beginning with the letter S.

5S stands for Sort, Set, Shine, Standard, Sustain. The three most basic steps towards implementing 5S are Sort: removing and relocating what is not necessary; Set: rearranging working tools in a scientific way, to avoid excessive time spent looking for items and moving things around; and Shine: always keeping the working environment hygienic.

The remaining 2Ss – Standard and Sustain – mean to cultivate lasting patterns and maintain the achievements of the first 3Ss, making 5S an effortless, permanent habit.