Rare polycythemia vera condition diagnosed as cause for Life-threating case

At FV Hospital on the evening of August 9th, a patient named P.V.S., 40 years old from Hai Phong was admitted to the emergency department. He was suffering from sudden dizziness, chest discomfort, dyspnoea, and even had blood foaming at the mouth.

The patient had been suffering from dizziness regularly and had undergone medical examinations in many areas for many years to treat the symptom. However, doctors were unable to find the cause of the condition in order to successfully treat it. In addition, the patient often experienced fatigue in his feet even if he walked only a very short distance.

At the time of the emergency, Dr Pham Luu Nhat Hoang, Deputy Head of the Accident & Emergency Department at FV Hospital, analysed the patient. His symptoms included not only dyspnoea, and blood foaming at the mouth, but also loud and interrupted sounds from his lungs, known as moist rales. The patient quickly received oxygen support, a lung X-ray examination and necessary blood tests. Based on the clinical and initial laboratory results, Dr Hoang diagnosed P.V.S. with acute myocardial infarction with cardiac arrhythmias (ventricular tachycardia) and acute pulmonary oedema. Following the diagnosis, the patient  received emergency medical treatment with medication and oxygen, and the case was quickly transferred to specialists within the Cardiology Department.

Facing the emergency situation, the FV Cardiovascular Interventional Team, headed by the Head of the Cardiology Department, Dr Huynh Ngoc Long, administered an intravascular intervention procedure to the patient within FV’s Cathlab. P.V.S. was identified to have about a 70% pre-ventricular artery stenosis. With the experience of more than 10,000 successful interventions, Dr Long created a narrow position opening and performed a stent placement to help the patient avoid any further narrowing. The patient, as a result, no longer suffered from chest pain and was able to breathe easier. Following the procedure, he was kept under observation by the Department of Emergency Medicine.

During the observation, the patient showed signs of dizziness, diplopia, convulsions in the eyeball, paralysis on the left side of his face, and doctors were unable to find a pulse in his legs. After a consultation with Dr Bui Kim My, Internal Medicine specialist from the Neurology Department, and Dr Luong Ngoc Trung, from the Vascular Department, P.V.S. underwent a MRI and CT scan on the whole body, including his brain. The results identified that the patient showed signs of cerebral embolism which were causing acute infarction in the left cerebellum and abdominal aorta. This was the reason why the patient was suffering from headaches, dizziness and had difficulty in walking for so long.

P.V.S.’s condition was complicated due to many manifestations of embolism in many parts in the patient’s body. These included; the coronary heart, cerebrovascular, and abdominal aorta. However, the risk of atherosclerotic cardiovascular disease was not so high. This was because the patient was only 40 years old, and had no habit of smoking, was not obese, nor suffering from dyslipidaemia, blood pressure issues, or diabetes, as well as having no family history of early myocardial infarction. In addition, tests for coagulopathy (Protein C, Protein S, anti-thrombin III, and homocysteine) and autoimmune diseases were all negative. FV’s cardiologists had consulted with internal medicine doctors, who examined the patient and reviewed his medical records and tests which had been previously performed. Dr Phan Van Trung, who has more than 20 years of experience in the field of Internal Medicine, found the cause of the condition, discovering that the patient had polycythaemia vera. Specifically, the erythrocyte index increased to 7,430,000/mm3, Hb to 20.2g/dl, and blood concentration to HCT 63.8%. These were all causing arterial occlusion which were affecting many parts of the patient’s body. 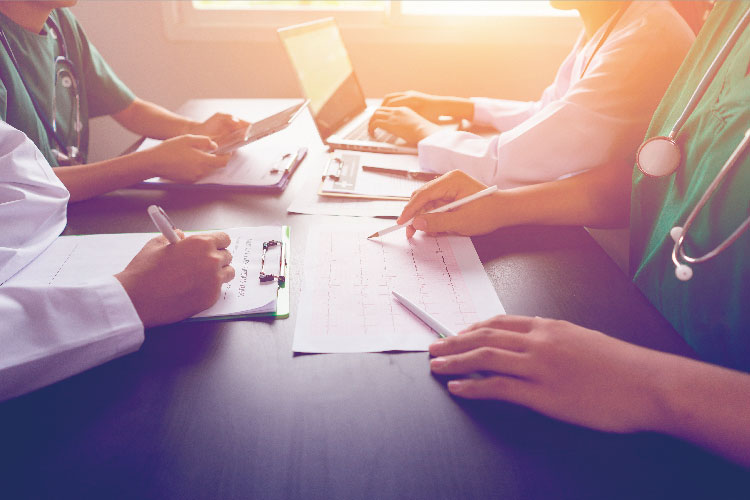 FV’s cardiologists had consulted with internal medicine doctors, who examined the patient and reviewed his medical records and tests which had been previously performed

With consultation support from haematology specialists from the Hospital of Haematology and Blood Transfusion in HCM City, the patient underwent intensive tests to diagnose for polycythaemia vera. These included tests for; myeloid blood cell and JAK2 mutations, and a bone marrow biopsy.

The results indicated that the patient had a positive JAK2 mutation, which caused numerous complications. The current red blood cells were 3 times more than normal, making the blood concentration up to 64%. This was the reason which caused the blockages of important parts of the patient’s body,  causing; heart attacks, blockages of cerebral blood vessels, and obstruction of the abdominal aorta, which resulted in anaemia in the legs. Dr Phan Van Trung shared: “This is a rare and severe case of polycythaemia vascular complications. We have saved the patient’s life, but the most important thing is to find the cause, the right treatment to help patients prevent complications of embolism, cerebral embolism and myocardial infarction.”

Based on the final diagnosis, doctors decided P.V.S. should have bloodletting, infusion and medicine to control the polycythaemia vera. Two weeks following the treatment, the patient was discharged from the hospital and returned to his hometown of Hai Phong for further treatment and recovery. Having faced death, the patient was so appreciative to the doctors: “I am very lucky, if I had not been sent to FV in time, I might not be here at this very moment!”.

After years of struggling with dizziness and leg pain, the cause of P.V.S.’s disease was finally determined once he came to FV Hospital. What was key in bringing the patient the best course of treatment was the cooperation and coordination of FV’s team of doctors from many specialties.

Rare polycythemia vera condition diagnosed as cause for Life-threating case