Operating under the principles of “quick and prompt”, FV Hospital’s ambulance service is always ready to provide remote treatment and to stabilize patients prior to conveying them to the hospital for further care. 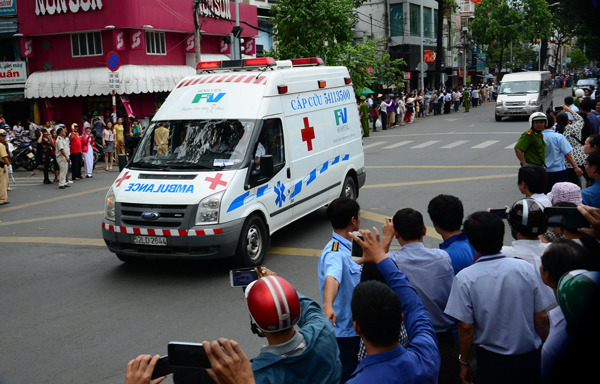 Immediately after receiving approval for JCI accreditation following the JCI quality inspection in late May, FV Hospital was entrusted to serve as backup hospital for President of the United States Barack Obama during his two-day visit to Vietnam. FV Hospital’s ambulance, which is fully equipped with advanced medical equipment and can function as a mobile ICU, was chosen to escort President Obama and his entourage throughout their agenda in Vietnam.

The Accident & Emergency Department at FV Hospital has two ambulances equipped with advanced, synchronized devices and which are always ready to safely and effectively provide emergency treatments and transportation for patients with moderate to severe conditions ranging from medical conditions to multiple traumas. All medical equipment and medicines used on the ambulances are daily checked for their operating condition, quality and quantity with data recorded carefully in detail to ensure they are always ready for emergency situations. Moreover, procedures for emergency and resuscitation are constantly updated, with paramedics receiving frequent advanced training. The ambulances and all equipment onboard comply with FV’s stringent, international-standard warranty and maintenance programs.

In order to be appointed as the hospital of record for President Obama and his entourage while in Vietnam, one of the prerequisites was that FV Hospital obtain the internationally recognized JCI certificate. Upon being named in the shortlist proposed to the White House by the U.S. Consulate General in Ho Chi Minh City, FV Hospital was visited and assessed comprehensively by two medical specialists from the White House Medical Unit before a decision was made. After the thorough assessment of the ambulance, they were clearly impressed with its advanced medical equipment – which includes a transportable ventilator, defibrillator, monitor, suction kit, intensive care medicines, scoop stretcher and inflatable splints – which is sufficient to provide proper medical support in emergency situations.

Mr. Abraham Medina, Tactical Medical Officer for the White House, shared that the team felt completely confident with FV Hospital’s facilities and services, especially with regards to its emergency service.

Modelled after the SMUR in France, FV Hospital’s ambulances are fully equipped to promptly provide treatment and transportation services for patients with severe internal diseases or multiple traumas. Two years ago, during a night of heavy rain, the family of Mr. T.D.H, 65, a resident of District 2, Ho Chi Minh City, called FV Hospital’s Accident & Emergency Department to request an ambulance.

According to the family, Mr. H. had been feeling unwell for weeks. Mr. H. told them that he felt uneasy, but he could still perform his normal daily activities, thus his wife and children took no further caution but simply encouraged him to take rest and eat well. Until that night, while sleeping next to Mr. H., his wife startled awake, hearing him breathe and pant heavily. She was extremely worried but couldn’t do anything more than call FV Hospital and wait.

When FV Hospital’s paramedic team arrived, Mr. H. was in critical condition with severe shock and laboured breathing; his face was extremely pale. After analysing Mr. H’s medical history, the doctors noted that there had been dark mucous present in his vomit. Soon thereafter, the paramedic team confirmed that Mr. H was suffering from hypovolemic shock – an emergency condition in which severe blood and fluid loss make the heart unable to pump enough blood to the body –due to upper gastrointestinal bleeding. An anti-shock regimen was immediately implemented, with Mr. H given two rapid fluid IV infusions. Once his blood pressure was stable, Mr. H. was promptly transferred to the ambulance, with paramedics giving resuscitation during his transportation to FV Hospital. During that time, FV Hospital’s paramedic team continued to monitor the patient closely, while calling the on-call gastroenterologist to brief him on the patient’s condition and request an urgent gastroscopy.

As suspected by the emergency doctor, Mr. H. had a bleeding peptic ulcer and required immediate haemostatic treatment through endoscopic surgery, a blood transfusion and then intensive care. If the ambulance team had arrived a few minutes later, Mr. H. would have been on the brink of life and death.

Following the visit of FV Hospital by Dr. Benoit Houzé, Medical Officer of the Presidency of the French Republic, during which he complimented FV’s modern facilities and advanced equipment as well as the professional qualifications of FV Hospital’s doctors, FV has been entrusted to be the official hospital for President Francois Hollande and his entourage during the official visit to Ho Chi Minh City on September 6th. FV Hospital’s ambulance will be part of President Francois Hollande’s motorcade.