You probably know about the relationship between smoking and lung cancer, but did you know smoking is also linked to heart disease, stroke and other chronic diseases? Smoking can increase your risk for cancer of the bladder, throat, mouth, kidneys, cervix and pancreas. Thinking about quitting? Look at the facts!

WHY SHOULD YOU QUIT?

WHAT MAKES CIGARETTES SO TOXIC AND DANGEROUS?

There are more than 5,000 chemical components found in cigarette smoke and hundreds of them are harmful to human health. 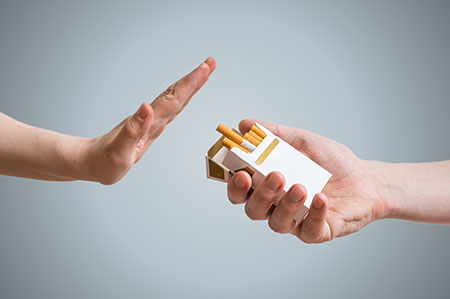 Here are a few examples:

Carbon monoxide is a harmful gas you inhale when you smoke. Once in your lungs, it’s transferred to your bloodstream. Carbon monoxide decreases the amount of oxygen that is carried in the red blood cells. It also increases the amount of cholesterol that is deposited into the inner lining of the arteries which, over time, can cause the arteries to harden. This leads to heart disease, artery disease and possibly heart attack.

Nicotine is a dangerous and highly addictive chemical. It can cause an increase in blood pressure, heart rate, flow of blood to the heart and a narrowing of the arteries (vessels that carry blood). Nicotine may also contribute to the hardening of the arterial walls, which in turn, may lead to a heart attack. This chemical can stay in your body for six to eight hours depending on how often you smoke. Also, as with most addictive substances, there are some side effects of withdrawal. And some e-cigarettes and newer tobacco products deliver even more nicotine than traditional cigarettes.

Cigarettes, e-cigarettes and tobacco products contain many dangerous toxins. The best thing you can do for your health is to quit tobacco entirely. Don’t spend the rest of your life chained to a nicotine addiction. Thousands of people kick the habit every year, and you can be one of them. It may not be easy, but you can do it!