WHAT IS THE HEART’S ELECTRICAL CONDUCTION SYSTEM?

If your doctor has suggested that you have a pacemaker fitted, it is because you have an abnormality in the electrical conduction system of your heart.

Your heart is a muscle that works like a pump. The main job of your heart is to pump blood throughout your body. The heart is divided into a right and left side. Each side hasn man upper chamber, or atrium, that collects blood returning to the heart and a muscular lower chamber, or ventricle, that pumps the blood away from the heart.

The pumping of your heart is regulated by an electrical current, or impulse, much like a spark plug in a car. The electrical impulse starts in the sinus node, often called the body’s natural pacemaker, and then spreads throughout both atria, like ripples in a pond. This causes both atria to contract, squeezing blood into the ventricles.

The impulse then travels down to the atrioventricular (AV) node, which is like a wire that connects to the ventricles. The AV node splits into 2 branches, allowing the even spread of the electrical signal to both ventricles at the same time. This lets your heart beat effectively. 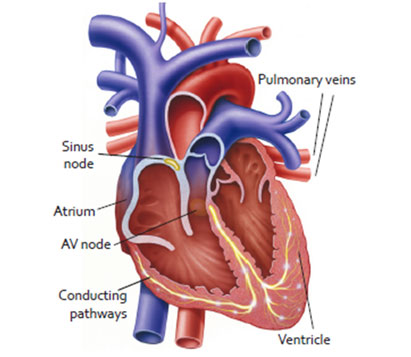 Sometimes the electrical system in your heart does not work as well as it should. This can cause the heart to beat too slowly, irregularly, or the upper and lower chambers to be out of sync. A pacemaker can treat some of these abnormal heart rhythms.

WHAT IS A PACEMAKER?

A pacemaker is a small device that is placed in the chest to help control abnormal heart rhythms (arrhythmias). It contains a battery that sends small electrical impulses down a lead and into the heart. It is these electrical impulses that keep the heart beating.
The lead is passed along a blood vessel to your heart and the pacemaker box is usually implanted under the skin in your upper chest. Some pacemakers have one lead and some have 2 or 3, depending on the problem with the heart.

Pacemakers usually work only when needed. If your heartbeat is too slow, the pacemaker sends electrical signals to your heart to correct the beat. 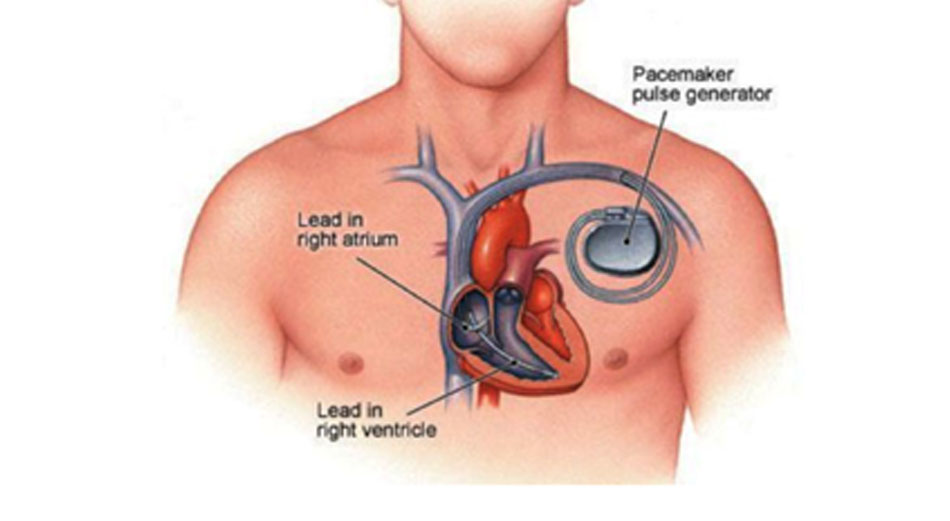 WHY DO I NEED A PACEMAKER?

Pacemakers are used to treat an abnormal heart rhythm (arrhythmia). Most patients need a pacemaker because their hearts beat too slowly. This is known as bradycardia. Sudden episodes of bradycardia can cause symptoms such as fatigue, blurred vision, dizziness, blackouts or fainting spells (syncopes) that can put you at risk of injury or harm.

Conditions for which a pacemaker is needed include:

An ICD is different from a pacemaker, it’s a device that detects any life-threatening, rapid heartbeat (tachycardia), particularly ventricular tachycardias. If it occurs, the ICD quickly sends an electrical shock to the heart. The shock changes the rhythm back to normal. This is called defibrillation. The ICD can also act as a pacemaker any time the heart rate
drops below a pre-set rate.

HOW IS THE PACEMAKER IMPLANTED?

Pacemakers are implanted by cardiologists who specialise in the electrical system of the heart. This specialty is called electrophysiology.

Before the procedure, the cardiologist will explain to you all the details, including risks and benefits, you will be then asked to sign a consent form.

The procedure is performed in the cath-lab. It is not usually performed under a general anaesthetic, but you may be given sedation, which will make you relaxed and sleepy.

Before the procedure starts, the doctor will clean the skin with some antiseptic solution and inject some local anaesthetic under the skin just below your collarbone.

This will numb the area and allow the doctor to pass a small lead or electrode through a vein into your heart. You may have 1, 2 or 3 leads inserted depending on what type of pacemaker you need. The lead(s) are then connected to the pacemaker box. This will usually be placed under the skin on your chest wall. The area will then be closed with dissolvable or non-dissolvable stitches.

The whole procedure should take approximately 60 to 90 minutes. 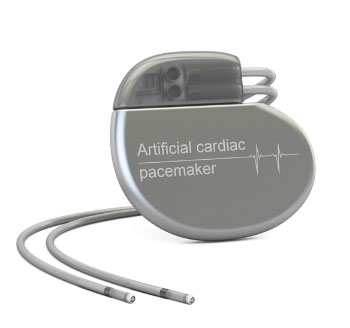 WHAT HAPPENS AFTER THE PROCEDURE?

After the procedure, you will be taken back to the ward. You will be asked to lie in bed for a couple of hours before you can get up, eat and drink. Your heart rhythm may be monitored for a while to make sure that the pacemaker is doing its job, so you may be attached to an ECG monitor. As the wound can feel quite bruised and sore, especially for the first day or 2, it is recommended that you take regular painkillers. It is important that you tell your nurse immediately if you have any pain or discomfort.

While you are recovering, it is important to avoid moving your affected arm; in particular, you must not raise this arm above shoulder height for the first 2 weeks because that could displace the pacemaker leads.

You will have a small dressing over your incision. This dressing will be removed 2 days after the procedure and your incision (the cut from your procedure) site must stay dry for 7 days to 10 days. Once you are feeling better, you will be able to go home.

Your pacemaker may be checked before you go home by your cardiologist.

Before leaving the hospital you will be given a pacemaker identity card with your name on it and the details of the brand and model of your pacemaker. You should always carry it with you. 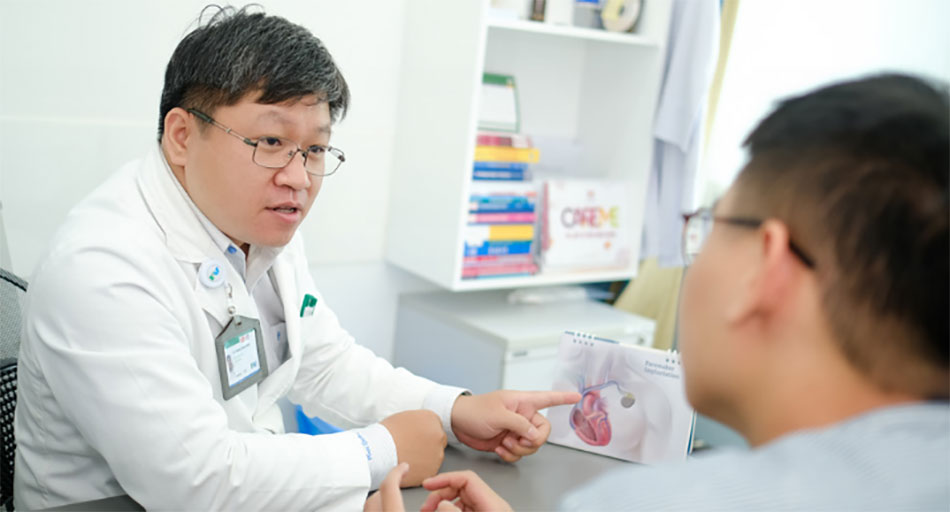 ARE THERE ANY RISKS ASSOCIATED WITH THE PROCEDURE?

There are some small risks associated with having a pacemaker fitted. Your cardiologist will discuss these with you in more detail before you sign your consent form. The most common risks are:

Call your cardiologist if you have any of these problems:

It can take up to 4 weeks for the pacemaker leads inside your heart to become firmly embedded.

To avoid dislodging the leads, follow these activity guidelines: 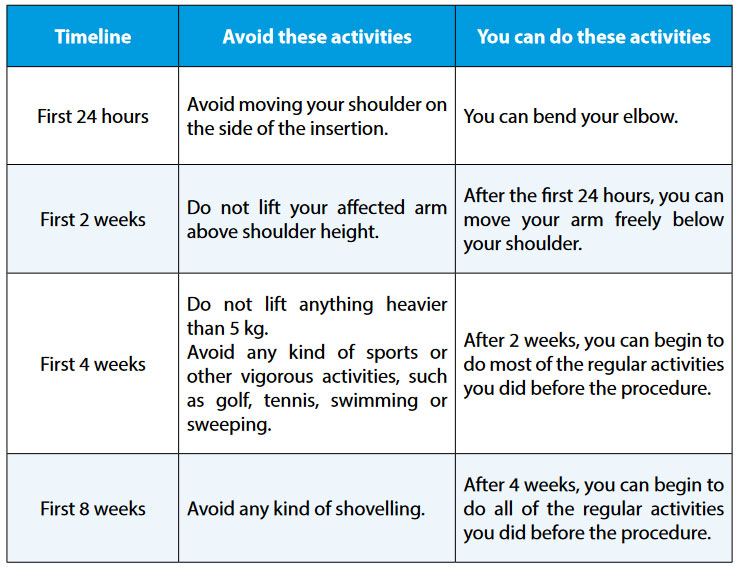 When can I shower?

You can take a bath or a shower 48 hours after you get home, but your incision (the cut from your procedure) site must stay dry for 7 days to 10 days.

Before you bathe or shower, tape a piece of plastic bag or plastic wrap over your dressing to keep your incision dry. You can remove the plastic after your bath or shower.

Can I use a cell phone?

Yes, you can use a cell phone. It is recommended, when both talking on and simply carrying a cell phone, you keep it on the side of your body opposite your pacemaker.

Can I use an iPod or MP3 player?

Yes, you can. It is recommended you keep the player on the side opposite the pacemaker when you are using or carrying it.

Can I use a microwave oven?

Yes, you can use a microwave oven without taking any special precautions.

Can I use an induction hob when cooking?

Anything that produces a strong electromagnetic field can interfere with a pacemaker.

Induction hobs do generate electromagnetic fields, so keep a distance of at least 60cm between the stovetop and your pacemaker. If you are choosing a new cooker, it may be easier to pick one that is not an induction hob.

Other appliances that contain a magnet include handheld hairdryers, older shavers with an electrical cord, large stereo speakers, electric toothbrushes and base chargers of ultrasonic toothbrushes. If you do use any of these, keep them 16cm away from your pacemaker.

Can I have an MRI?

New generations of pacemakers and ICDs are usually ‘MR-Conditional’ which means that a MRI can be performed following the device manufacturer’s labelled MRI conditions. If a MRI is deemed necessary, it is essential that a cardiac electrophysiologist is involved to determine whether the device is MR-Conditional and what is the procedure to follow before and during the examination.

If the implanted device is non-MR-Conditional, and if a MRI is the only diagnostic method to adequately address the patient’s clinical situation, the MRI can most of the time be performed following very strict safety precautions and in the presence of a cardiac electrophysiologist.

Can I go through security systems at airports?

How long should a pacemaker last?

Pacemakers can last anywhere from 6 to 15 years—the average is 8 years. The length of time depends on how hard the generator/battery has to work, which is affected by how much energy is needed to pace your heart and how your pacemaker is programmed. The functioning of your device will be assessed at each clinic follow-up appointment.

Will I feel the pacemaker? At first, you may feel the weight of the pacemaker in your chest. With time, you will become accustomed to it. The generator is very small and weighs about 30 grams, depending on the make and model.

Once your doctor gives you the go-ahead to exercise, it is a good idea to exercise regularly.