For some earlier stage cancers of the oesophagus (food pipe), surgery can be used to try to remove the cancer. If the cancer has not yet spread far beyond the oesophagus, removing part or all of the oesophagus (and nearby lymph nodes) may cure the cancer. Unfortunately, most oesophageal cancers are not found early enough for doctors to cure them with surgery. In those cases, surgery is often combined with other treatments, such as chemotherapy and/or radiation therapy.

What type of surgery do I need?

The type of surgery you need for cancer of the oesophagus depends on:

Operations to remove some or most of the oesophagus (called oesophagectomies) are major surgery. 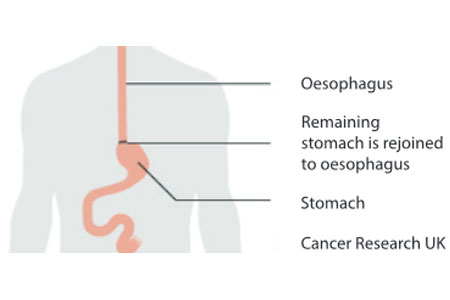 Removing part of your oesophagus and reattaching it to your stomach

This operation is for when the cancer is only in the oesophagus. The surgeon removes the cancer and some surrounding healthy tissue. They then rejoin the healthy part to your stomach and pull it up into the chest. 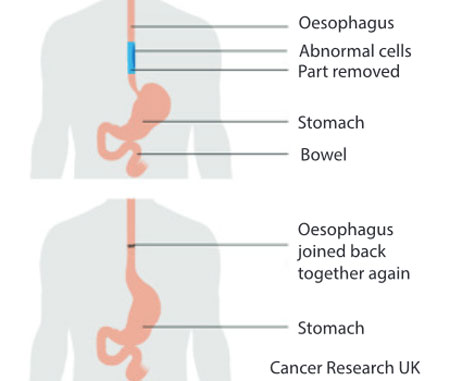 Removing all of your oesophagus

How your surgeon does your operation

Many different approaches can be used to remove part of the oesophagus: 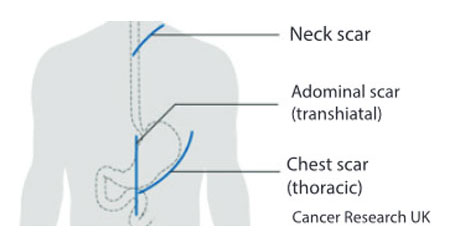 You and your surgeon should discuss in detail the operation planned for you and what you can expect.

For some early (small) cancers, the oesophagus can be removed through several small incisions instead of large incisions. The surgeon puts a scope (like a tiny telescope) through one of the incisions to see everything during the operation. Then the surgical instruments go in through other small incisions. In order to do this type of procedure well, the surgeon needs to be highly skilled and have a great deal of experience removing the oesophagus this way. Because it uses smaller incisions, minimally invasive oesophagectomy may allow the patient to leave the hospital sooner and recover faster.

No matter which approach is used, oesophagectomy is not a simple operation, and it may require a long hospital stay.

During your operation the surgeon examines the oesophagus and surrounding area. They take out all of the lymph nodes from around your oesophagus. This is a lymphadenectomy.

The surgeon takes out lymph nodes in case they contain cancer cells that have spread from the main cancer. Taking the nodes out reduces the risk of your cancer coming back in the future. It also helps your doctor to decide if you need chemotherapy after your surgery.

The number of lymph nodes your surgeon removes varies. Your surgeon might remove nodes from around your stomach as well.

Risks and side-effects of oesophagectomy

Like most serious operations, surgery of the oesophagus has some risks. Some complications from this surgery can be life-threatening.

Sometimes minor types of surgery are used to help prevent or relieve problems caused by the cancer, instead of trying to cure it. For example, minor surgery can be used to place a feeding tube directly into the stomach or small intestine in people who need help getting enough nutrition.

Surgery for Cancer of the Oesophagus