Patient T.T.H., a 55 year old man,, underwent 4 surgical procedures of kidney stone removal and 10 years of taking medicine to stabilize calcium levels in his blood, both with limited results, before coming to FV where his condition was finally cured.

Thanks to advanced CT imaging technology using the Spect CT system, FV’s doctors determined that the root cause of the patient’s condition was due to parathyroid tumours which caused increased calcium in the blood, forming the kidney stones. Accurate diagnosis results from the technology also made removal surgery for the tumour convenient and effective.

Mr T.T.H. had been following a complicated and persistent treatment regime for kidney stones and urological pathology. From 2009 to 2013, he underwent 4 kidney stone removal surgery procedures and was treated for related diseases, such as hydronephrosis. During the follow-up examinations, however, the doctor noticed that the level of calcium in his blood was very high. The patient’s PTH index, parathyroid hormone regulating the level of calcium and phosphorus in the blood, was exceeding the rate of 100, normally it should range between 16 to 65. Assuming it to be a manifestation of pathology hyperparathyroidism, the doctor requested the patient to be taken for a radiography scan to detect parathyroid tumours. Commonly, the primary hyperthyroidism disease, usually occurs between the ages of 50 and 60 with an average rate of 1 to 4 people out of 1000 suffering from the disease.

In 2014, Mr T.T.H. went to another hospital in the city to undergo surgery to remove the parathyroid gland tumour. However, after the surgery the condition not only did not improve but also got worse. Eventually, he decided to go to FV Hospital to find out the reason.

In July 2019, Mr T.T.H. visited FV to have a urology examination with Dr Do Quang Minh to check his kidneys and ureter. He was also tested by internal medicine Dr Phan Van Trung, for hormonal index, as his PTH index had reached 148. The doctors carefully conducted a study on the records of the surgical procedures the patient underwent at the other hospitals. The results showed that the parathyroid gland tumour had not actually been removed, but only the surrounding thyroid.

For the purpose of precise determination of the current status of the tumour, doctors from the Urology and Internal Medicine Department consulted with Dr Nguyen Van Te, Head of Nuclear Medicine Department of FV Hospital, so that the patient could receive a radiography, tomography and imaging using Spect CT equipment. This technique helps doctors accurately detect the location of the parathyroid tumour hidden deep within the nucleus of the thyroid gland, while also measuring the tumour size as well as anatomical correlations in the neck area, thereby helping the surgeon easily conduct the process of removal. 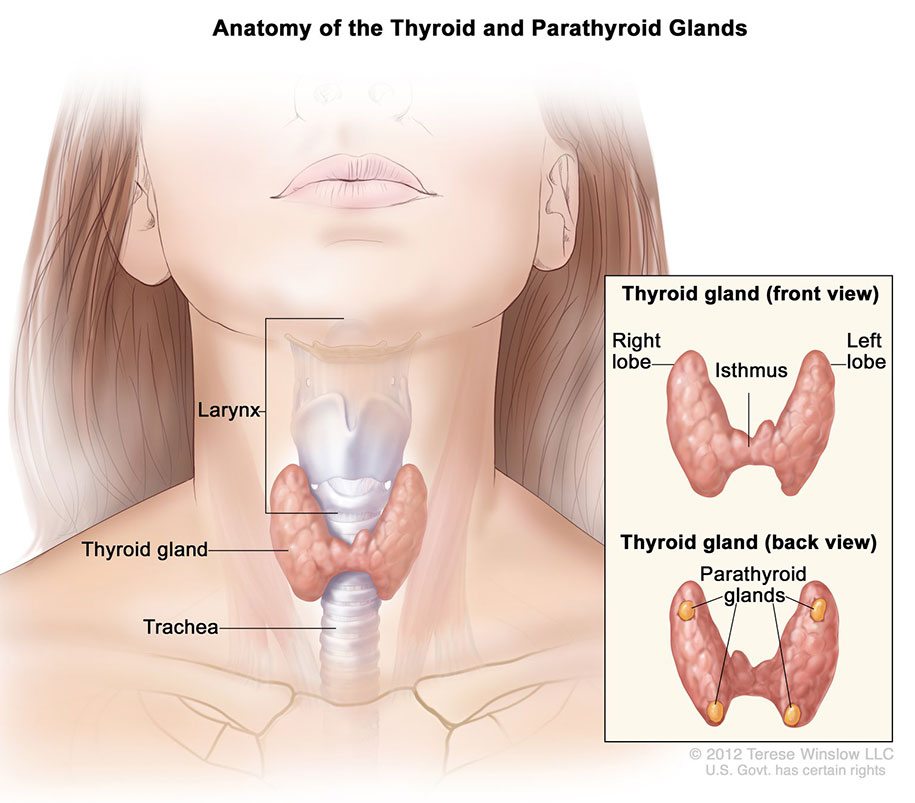 Illustration of the parathyroid glands in the human body

On August 8th, the operation of Mr T.T.H. was performed to remove the tumour with an experienced surgical team, including Dr Phan Van Thai, Head of General Surgery Department of FV Hospital. During the surgery, Dr Thai noticed that at an old incision, there was some stickiness which caused the nerves of the neck to attach to the parathyroid glands. This was a very dangerous situation which could affect the larynx. As a result, it was possible that the patient would have to suffer from hoarseness for the rest of his life. However, with more than 20 years of experience in the field of surgery and valuable support from the previous image diagnostic results provided by the Spect CT equipment, the crisis was meticulously resolved by Dr Thai, who successfully removed the tumour. The following day, the patient was discharged from the hospital, being able to eat normally and having no hoarseness in his voice. The PTH index of calcium and phosphorus in the patient’s blood also returned to normal after a number of regular tests, taking place after 7, 30 and 60 days following the procedure.

The case of Mr T.T.H. encountered was of a benign tumour of the parathyroid gland. However, due to the high intensity of the parathyroid glands, the concentration of calcium in the blood increased. If the condition had carried on, the patient would have continued to suffer from kidney stones and incurred osteoporosis. The potential worst case scenario of this would be incurring a disability.

According to Dr Phan Van Thai: “The surgery is not difficult but requires meticulousness to avoid complications for patients. The success of the surgery is thanks to the new radiography, tomography and imaging techniques provided by the Spect CT equipment, especially in collaboration with the Department of Imaging and Nuclear Medicine and with the support of doctors from the Urology, Internal Medicine and General Surgery Department”.

Mr T.T.H. is now completely cured and no longer has to worry about hypercalcemia as well as any complications causing kidney stones, osteoporosis and urological diseases.