A 53-year-old patient with acute myocardial infarction: “I have never experienced symptoms before”

When 53-year-old Canadian patient Mr R.C. was brought to the door of the Cardiac Catheterisation Lab (Cardiac Cathlab), his heart suddenly stopped beating. Just minutes earlier, he had arrived at FV Hospital with chest pain, but was fully conscious. Mr R.C. says that he had never experienced heart attack symptoms before.

While exercising, Mr R.C. experienced a feeling of tightness in his chest, so he quickly informed his family. Immediately, they called an ambulance to take him to an international clinic in HCMC’s District 2. The emergency team there identified that Mr R.C. had signs of serious cardiovascular disease and ordered his transfer to FV Hospital.

At FV’s Accident & Emergency Department, doctors diagnosed Mr R.C. was experiencing an ST-elevation myocardial infarction (STEMI). This pathology caused myocardial necrosis due to blocked coronary arteries, leading to a lack of blood supply to the heart muscle. The time in which the team had to save the patient’s life was calculated in minutes. Immediately, the interventional cardiology team, the anaesthesiology resuscitation team and the cardiovascular intervention room (Cardiac Cathlab) were activated, ready to perform a procedure in just a few minutes.

In parallel with the treatment of cardiovascular emergencies, the intervention team also activated the epidemic prevention process similar to that of patients with COVID-19. All medical staff involved in performing the procedure must use personal protective equipment (PPE) and specialised masks. The operating room and Cardiac Cathlab room are also treated with special ventilation to ensure standards in infection control. At the same time, the patient was immediately sampled for SAR-COV-2 test by PCR Fast-track (with PCR results in 2 hours), to determine the post-operative monitoring area at the COVID-19 Treatment Department or in other specialties. 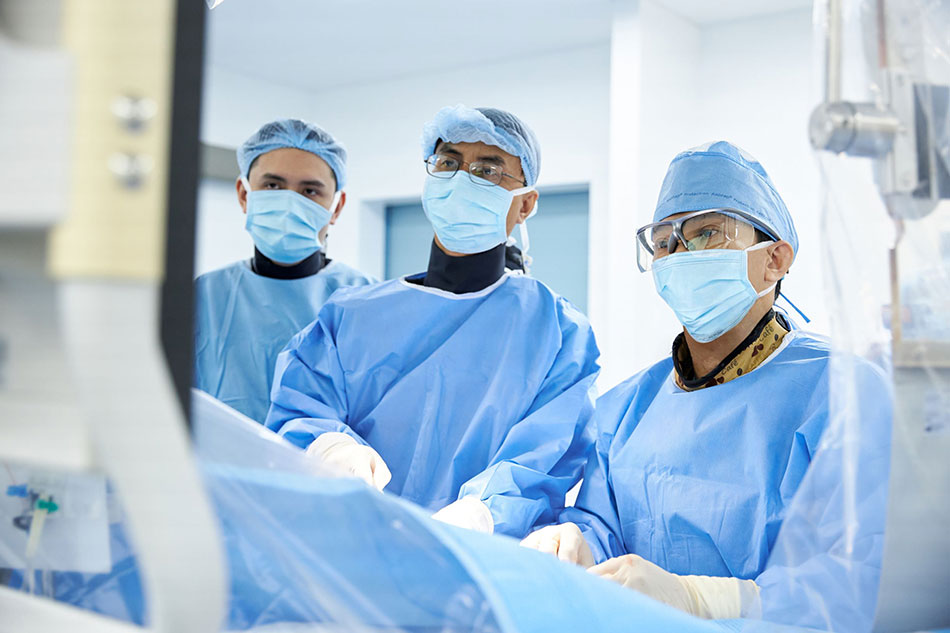 Mr R.C was immediately transferred to the intervention room, but the patient’s myocardial infarction progressed faster than expected. When he arrived at the door of the Cardiac Cathlab, Mr R.C.’s heart suddenly stopped beating. Head of Cardiology Ho Minh Tuan MSc, MD, who was leading the intervention team said: “We had to resuscitate with a pacemaker, massaging the heart outside the rib cage combined with electric shock to recover blood circulation before we conducted the intervention. If the procedure was not performed in time, it would endanger the patient’s life. At all costs, we did not want to miss the ‘golden hour’.” After Mr R.C.’s circulation stabilised again, his heart continued to exhibit many arrhythmias, so his doctors decided to continue resuscitation and conduct a simultaneous intervention.

Utilising the modern equipment at the Cardiac Cathlab, the team quickly determined the location of the blocked coronary artery. Doctors re-opened the blood vessel and successfully placed a stent to stabilise the artery. After 15 minutes, the intervention was successful, Mr R.C. vital signs were normal and his blood pressure gradually stabilised.

The patient continued to be cared for in the Intensive Care Unit (ICU). One day after the intervention, Mr R.C. was recovering well, the laboratory and clinical parameters were good, so his doctors stopped mechanical ventilation and transferred Mr R.C. to the usual care area. Dr Minh Tuan explained that, in the case of Mr R.C., it was extremely fortunate that his family reacted quickly and got him to a hospital in time. If he had been admitted later, the situation could have been much worse.

Mr R.C. said he had a history of high blood pressure and dyslipidaemia (also known as bad cholesterol, high cholesterol, high triglycerides or elevated LDL-c), but never experienced chest pain or tightness before. “Due to my busy job, and given that my health is quite stable, I have annual check-ups according to the company’s schedule and take antihypertensive drugs to correct dyslipidaemia, but I have never thought about going to the hospital to intensively check my heart health,” shared Mr R.C. Mr R.C. and Dr Ho Minh Tuan at his second follow-up visit after being discharged from the hospital

Mr R.C. said he had also adjusted his diet in accordance with dyslipidaemia, while maintaining a regimen of exercise and weight loss. Because generally he was very healthy and had never experienced any signs of cardiovascular disease, Mr R.C. had never imagined that he could encounter dangerous situations like the one he had just experienced.

Dr Ho Minh Tuan explained: “In addition to external influences, genetic factors also greatly influence the expression of cardiovascular diseases.” For example, in cases of dyslipidaemia, good nutrition can control 20 per cent of cases of bad cholesterol, while genetics play a large part in this disease. Therefore, many patients, even though they have no previous pathology and lead a healthy lifestyle, are still likely to be predisposed to dangerous cardiovascular diseases due to genetic factors. Cardiologists always recommend that people with a family history of cardiovascular disease should regularly monitor their heart health, especially those entering middle age.

Mr R.C. was discharged after one week of follow-ups, when his chest pain and shortness of breath had also disappeared. Mr R.C. will need to have a follow-up visit every two weeks for two months to ensure that his health remains stable. After surviving his last life-and-death situation, Mr R.C. recommends that others who need to lose weight should exercise as recommended by their doctor and arrange an annual heart health screening to avoid a dangerous situation from occurring to them.

This initiative by FV Hospital is aimed at reducing the burden of hospital fees for patients and their families, as well as to open up opportunities for more people to experience FV’s international-standard medical care with social security medical insurance.

A 53-year-old patient with acute myocardial infarction: “I have never experienced symptoms before”