Ankylosing spondylitis is a common disease in the group spondyloarthritis, common in young people and more in men than women, caused by systemic and chronic inflammation of joints, especially the spine vertebrae and sacroiliac joints (buttock area). Inflammation is also sometimes noted in peripheral joint sites, causing swelling, heat, redness, pain in the joints of the hands and feet or inflammation around where the tendon attaches to the bone around the joint (tendonitis). Chronic pain related to this inflammation can result in joint stiffness, ankylosing spondylitis (which causes vertebrae to fuse) and ultimately disability, causing a loss of ability to work and live normally. In addition, patients sometimes experience symptoms such as fever, weight loss, uveitis, inflammatory bowel disease, heart valve regurgitation and arrhythmia. Currently, scientists have not been able to find the main cause of ankylosing spondylitis. However, studies show that genetic factors through the HLA B27 gene and environmental factors are the causative agents of this disease.

Mr L.V.L., 40 years old, residence of Vinh Long, visited FV with polyarthritis, back and neck pain and rapid weight loss which occurred over one month. Mr L.’s legs were so swollen that he needed a wheelchair to move about. Previously, Mr L.V. L. visited a provincial hospital for examination and treatment and was diagnosed with spondylolisthesis and a herniated disc, and his condition continued to worsen. At FV’s Department of Osteoarthritis, Dr Nguyen Thi Kim Huong performed a clinical examination and assigned X-ray, MRI and blood tests for the HLA-B27 gene. The results showed that Mr L. had early stage spondyloarthritis without lesions. If left untreated, it would lead to ankylosing spondylitis. Because the patient did not respond to previously used anti-inflammatory pain relievers, Dr Kim Huong prescribed a biological injection to treat the disease.

Ms T. T. K. H. 48 years old, from Ho Chi Minh City, visited FV with chronic pain in her right elbow, swollen wrist joints, back pain spreading behind her thighs and numbness that she’d been experiencing in both legs for many years. Previously, Ms K. H. had been diagnosed with sciatica, lateral epicondylitis and Achilles tendinitis, and had received two lateral corticosteroid injections on either side of her spine which relieved her pain for less than two weeks, and left her with complications of skin atrophy. At FV’s Department of Osteoarthritis, Dr Nguyen Thi Kim Huong recognised symptoms of suspected ankylosing spondylitis and assigned X-rays and a blood test for the HLA-B27 gene. Ms K. H. was diagnosed with ankylosing spondylitis and was also prescribed biological injections.

To date, both L.V. L. and K. H. patients are very satisfied with the biological drugs and results have exceeded expectations with a marked improvement in symptoms immediately after the first injection. After six months, if the effects of treatment are maintained, these patients will no longer be in pain and can live and work normally, without the need for medication beyond their periodic monthly injections.

According to Dr Nguyen Thi Kim Huong, the early symptoms of ankylosing spondylitis are vague and confused with other joint diseases, so patients are often only diagnosed at a later stage following the right tests. Worldwide, the average time of diagnosis is usually eight to 11 years after symptoms appear. The first warning sign of ankylosing spondylitis is inflammatory back pain. Unlike symptoms of back pain caused by other diseases, this back pain often has the following characteristics:

At the Rheumatology Unit within FV Hospital’s Internal Medicine Department, the use of biological drug therapy to treat patients with inflammatory joint diseases has yielded positive results. Pain and swelling disappeared after a few cycles of taking the drug, without the use of pain relievers. Inflammation was well controlled, and liver and kidney functions remained stable. 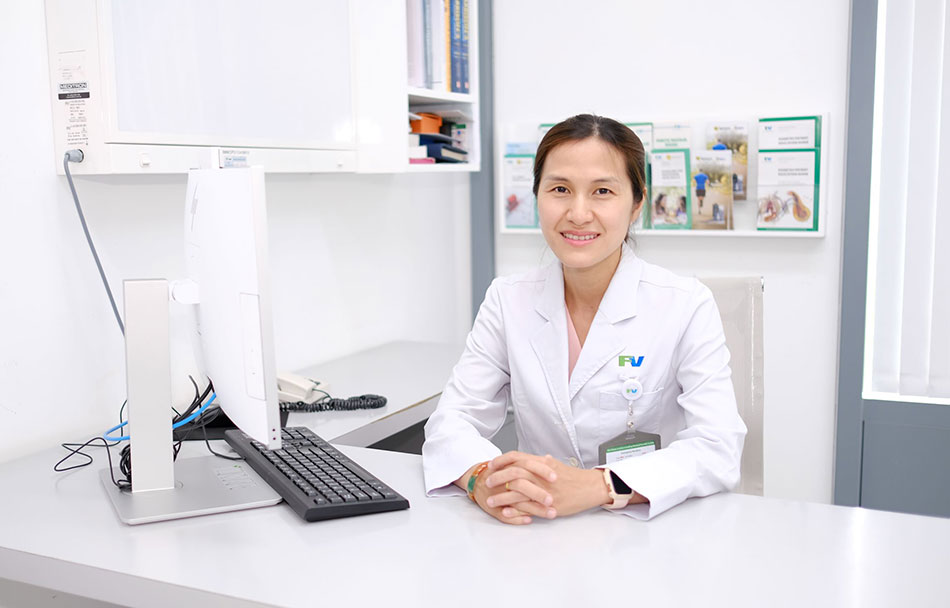 With 14 years of experience and deep expertise in autoimmune and musculoskeletal diseases, Dr Kim Huong has helped patients with musculoskeletal problems become pain-free and walk and use their hands normally again.