For most, being 16 years old is an exciting, happy time when young teenagers begin to dream about their future. K.N. from Hue City, however, was unable to enjoy this time in her life, nor think about the future, as she had to cope with a painful tumour which had been with her for many years.

Hospitals Played a Large Part in Her Childhood 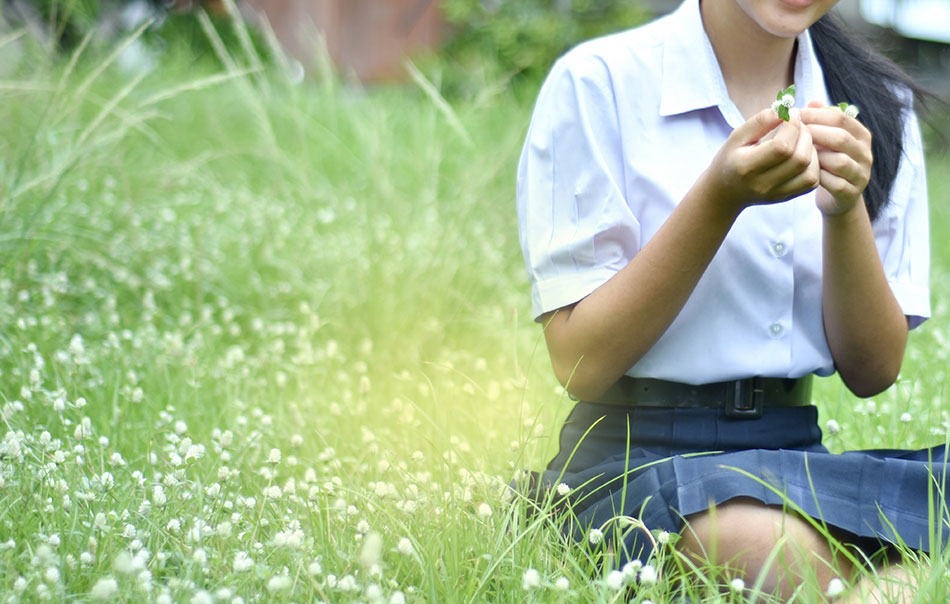 When turning three years old, K.N.’s family took her to a number of large hospitals in Hue City for treatment. Many doctors diagnosed that she was suffering from widespread vascular malformation which required surgery. Subsequently, as much as possible of the tumour was removed and a skin graft was then carried out. However, following that, her vascular malformation appeared again and a larger tumour began to develop, extending from her left hip to her thigh. She went to the hospital for an examination and treatment for six consecutive months, however, she had to halt the medical support due to the financial burden her family was facing.

As K.N. grew up, the tumour became larger, and constantly bled and discharged. Frequently, she visited the hospital to receive treatment for her condition. When she was 10 years old, she underwent a second surgical procedure. The doctor warned her family to be prepared for potential complications as the procedure required a deep and wide incision. K.N.’s tumour was successfully removed, however, after a short period of time, once again, it returned. This time, the tumour expanded from a part in her chest to her thigh.

To maintain costs of treatment for their daughter, her family were faced with significant financial burdens. Therefore, when finishing secondary school, K.N. was required to stop her education so that she could earn money. She did this by helping her mother with sewing at home. The family then saved, with the hope to afford successful treatment through another surgery. This was despite the advice of their doctor, who shared with them that necrosis would be caused if the same area of her skin was operated on again. Regardless, the family and K.N. were committed to trying another surgical procedure with the hope to live a normal life.

This year, K.N. is now 16 years old and throughout her life, her fatal disease has made her suffer with both physical and mental pain. K.N. always hoped that one day she could recover from this disease to have the freedom to do everything and go everywhere she wants. She once shared with her relatives, “I don’t know if anyone would ever be my friend. I also am confused on whether I can have a chance to ever be healed or not.”

What Hope Is There?

Sympathizing with her and her family’s wishes, but also to help her avoid the risk of necrosis from undergoing further surgery, the doctor monitoring K.N.’s condition at Hue, recommended her family travel to Ho Chi Minh City and meet with Dr Luong Ngoc Trung. Dr Trung has over 15 years of experience in Vascular Surgery & Phlebology at FV Hospital. Both doctors exchanged the medical information to find the best treatment for her condition.

After researching the cause, Dr Luong Ngoc Trung realized that he could treat K.N.’s case. Her family, however, did not have the financial means to follow the treatment process. With the aim to help her recover from this condition, Dr Trung introduced The Children of Vietnam Charitable Fund. This organisation specialises in providing treatment and surgery for Vietnamese children under 16 years of age who have a disadvantaged background.

Receiving the approval from The Children of Vietnam Charitable Fund, in January 2020, K.N. was relocated to FV Hospital, Ho Chi Minh City for examination and treatment. All the financial costs were covered by The Children of Vietnam Charitable Fund. These included transportation, accommodation and hospital fees. To treat the vascular malformation, Dr Luong Ngoc Trung planned two injections at 30 day intervals to monitor the effects of the medicine. In April 2020, K.N. visited FV Hospital, and luckily there was a positive result. Dr Luong then evaluated that “the tumour had been removed by over 80 percent and there were no signs of relapse”.  Therefore, K.N, would now just need to use medicine under the instruction of her doctors and undergo a re-examination after six months.

Her mother shared, whilst seeing her daughter enjoying her life happily with no disease affecting her, “The medicine given was very effective. I wish all children who unluckily face such diseases could find the way to treatment with the support of Children of Vietnam Charitable Fund.”

Now back in Hue, K.N. no longer suffers from any pain from the tumour, and can enjoy her life and make friends. She shared that when she is older she wants to take a bartender training course and after, she will look to open a coffee shop to sell coffee to her neighbours. Now the days of suffering have finally ended, K.N. can start to live happily and plan for her future.

The Children Of Vietnam Charitable Fund

Its mission is to change the futures of disadvantaged children under sixteen years old who have been born with congenital deformities or developed serious problems as a result of disease or after suffering an accident, such as: