FV Hospital has been on the frontline of Vietnam’s response to the coronavirus pandemic, the organisation is adapting to a new normal and continuing to provide leading medical services to its patients

There will be many people, organisations and societies at large reflecting on the past 12 months with the age-old saying in mind – what a difference a year makes.

Back in November 2019, Jean-Marcel Guillon was looking ahead to the next chapter in a comprehensive seven-year plan for FV Hospital, a leading private medical institution in Vietnam’s Ho Chi Minh City which he set up and launched in 2003.

The Frenchman, who practiced as a pulmonologist and senior consultant, jumped many hurdles on his way to establishing his own Vietnamese hospital – from struggles to raise financial capital to a chance meeting with an architect in a St Germain bar, the journey has been a fascinating one to this point.

Enter COVID-19. When the virus outbreak in Wuhan Province was confirmed by Chinese authorities in January 2020, few could have imagined the health and socioeconomic fallout that would follow in the months since.

An unknown entity and unprecedented scenario for many countries around the world, the response and action taken by governing authorities has been tremendously varied. Fortunately for Vietnam, action so far has been decisive and effective.

“When we heard about China in January we did not panic,” Guillon says. “The experience with SARS in 2003 may have helped in this respect, in that the country has dealt with similar situations in the past.

“Vietnam was quick to close its borders and took quarantine measures extremely seriously, adopting a tracking and tracing system that was hugely successful. At one point, there were 80,000 people contained within quarantine centres around the country, a huge logistical feat which has helped to contain the virus.

“They don’t beat around the bush here – if one person tests positive, then everyone who has been around them will be placed into isolation to the point where you can’t go and walk your dog.”

The plan worked, and Vietnam recorded zero cases for several months until the end of July, when illegal Chinese immigrants heading to Cambodia brought COVID-19 back into the country via the city of Da Nang, a huge hub of domestic tourism. While another outbreak ensued, the situation has, once more, been brought under control and at the time of writing just 35 deaths have been recorded.

For Guillon personally, the middle part of this year was unintentionally spent in France.

“I went on a skiing holiday with my family to Switzerland with the intention of coming back to Vietnam after a week, but ended up returning seven months later,” he says. “Fortunately I was able to live in my home in the south of France for this time and work remotely, but the trip didn’t exactly go to plan, and I have no idea when will be a good time to head back to Europe again.”

A reluctance to visit hospital through fear of catching the COVID-19 virus resulted in sharp declines in patient visits, a trend which inevitably led to a fall in income.

Guillon had no choice but to adopt a policy of damage limitation, deploying a series of cost-saving measures which have enabled the hospital to continue operating with its head above water during what have been particularly challenging times.

For this, the CEO is tremendously grateful to his family of staff. 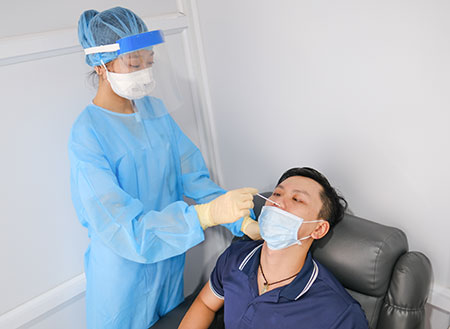 “It hasn’t been easy,” he says. “We’ve had to cut back hours, move some people to work from home where they can, and halted most projects which we were planning before COVID arrived.

“But the response of the team has been admirable – they have been on board from the start and accepted our decisions, often working unpaid overtime and going above and beyond to ensure the future viability of FV Hospital, a sign that we truly are a big family here.

“I could not be prouder of them. Around 50 percent of our people have been with us for five years or more, and 150 or so have been a part of our journey since the very beginning.”

“Although this has been an important revenue generator recently, we knew that our regular patients would come back, and the fact they have returned in bigger numbers is testament to how much people trust FV Hospital to treat them” – Jean Marcel Guillon, CEO

On the COVID frontline

The team at FV has been influential in Vietnam’s fight against the virus.

Guillon made the decision to move the hospital to the frontline, applying for a testing license from the Ministry of Health and creating a dedicated wing for COVID screening and treatment, all carried out to the same exacting standards that have helped to build FV’s reputation over the past 17 years.

In July, the second outbreak triggered a shift in approach towards mass testing, with FV Hospital providing tests on-site and at people’s homes, the CEO also detailing how it has set up a drive through system which can be deployed as and when the need arises.

All of this required a smooth functioning supply chain, especially in the provision of personal protective equipment and other vital supplies needed to operate at the forefront of the COVID-19 response.

“Unlike in my home country France, Vietnam makes virtually everything, so we had a reliable and plentiful supply of everything needed such as face masks and surgical gowns,” Guillon says. “I must admit I was a little anxious at the beginning, but our suppliers across the whole chain have been tremendous during this year.”

Such has been the success of FV’s contribution to date, COVID testing and treatment has become a key stream of revenue for the organisation, generating around five percent of turnover through August and September.

And despite the volume of testing dropping, the hospital continues to provide these services, in particular to organisations such as schools and offshore oil firms who require their staff to test negative before entering their working environment.

“Although this has been an important revenue generator recently, we knew that our regular patients would come back, and the fact they have returned in bigger numbers is testament to how much people trust FV Hospital to treat them,” Guillon continues. “Recently we broke our record for the number of outpatients in a single day”.

“I would say we are somewhere near back to normal. We are hitting around 90 percent of our budget goals, and this is despite a complete collapse in medical tourism due to travel restrictions and border closures.

“What we have found is that more Vietnamese nationals, who may otherwise have travelled to places like Singapore, are now being treated here because they also cannot move between countries, for example patients having a diagnosis of cancer discovered that we have a cancer centre on par with those of Singapore and Bangkok and are now treated at FV.”

For instance, FV Hospital’s state-of-the-art cancer centre is busier now than it ever has been since opening in 2018, a fact which suggests that normal service is being resumed and expanded.

Guillon also reveals that some of the organisation’s renovation projects are now being put into the pipeline, the CEO is optimistic that 2021 will be a year of significantly less disruption than what this year has delivered to date, although his own travel plans may have to remain on hold.

“I do fear not being able to travel back home to Europe next year,” he says, bringing the conversation to a close.

“However, I am optimistic about the situation here in Vietnam. The government will not open up borders until it is completely safe to do so, so we will be operating in a bit of a bubble for some time – but given around 95 percent of our business comes from Vietnam nationals, we should not be too adversely impacted.

“It has been a whirlwind year, but I am excited to see what the future holds.”