“After the thyroid tumour removal surgery, I felt that my neck was so empty and unfamiliar. The feeling of struggling to breathe had gone away! Doctor Thai is number one.”, shared Mr Quoc Cuong with a thumbs up. 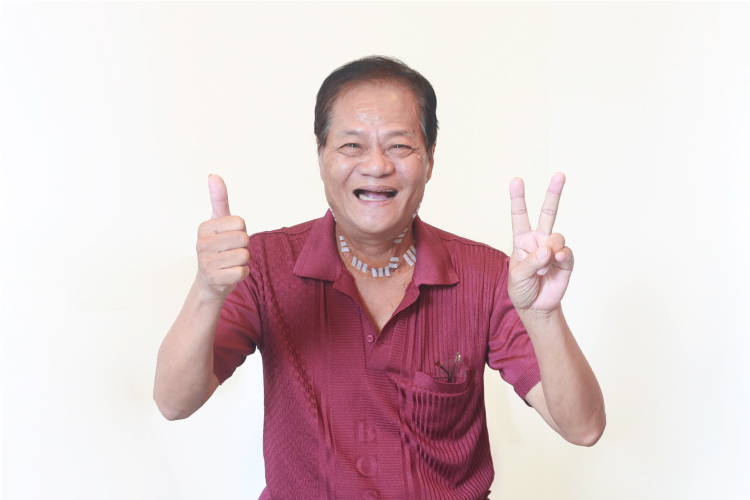 While in a light-hearted spirit, the experience which Vang Quoc Cuong, the 61-year-old patient living in Ho Chi Minh City, shared was very inspiring. He had just undergone successful major surgery at FV Hospital to remove all the thyroid tumours and metastatic lymph nodes that had encroached upon his neck. Mr Cuong was initially hospitalized at FV with a swollen neck and breathing difficulties. After an examination and a number of tests, Dr Phan Van Thai, Head of the General Surgery Department at FV Hospital, diagnosed that Mr Cuong was suffering from a serious case of thyroid cancer, with metastatic lateral lymph nodes, which had invaded the organs around his neck area. The tumour also blocked part of his trachea as well as his oesophagus. In addition, it also put his oesophagus under pressure causing breathing difficulty; affected his pre-spine; blocked the entire left jugular vein running from the skull to the chest; and blocked a part near the base of the right jugular vein (the main vein within the neck which brings blood from the brain to the heart).

Previously, when visiting a large hospital specialising in thyroid cancer in Ho Chi Minh City, Mr Cuong was diagnosed with extensive invasive thyroid cancer which was untreatable. It was deemed that if surgery was performed, it was highly likely that Mr Cuong would suffer dangerous complications from a serious disability or even death. Desperate, Mr Cuong returned to his family home. His family members were aware that if he did not undergo surgery, after a few months, he would die from suffocation due to the expanding tumour.

As a matter of luck, one of Mr Cuong’s family members happened to know FV Hospital through a friend whose relative was successfully treated for throat cancer there a few years ago. The door of hope once again opened and the whole family brought Mr Cuong to FV to meet Dr Phan Van Thai. After undergoing an examination and having the tumour meticulously measured. Dr Thai, with his thorough and comprehensive assessment, identified that it was still possible to perform surgery. Moreover, the doctor clearly listed possible complications and explained each possibility. He also planned a remedial plan for each complication for the patient and his family. In addition, Mr Cuong’s case was also referred to the Medical Council at FV to receive a multidisciplinary agreement on the surgical treatment decision being the best course of action for this complicated case.

For the patient and his family, after 3 days of discussions, with the will and determination to overcome the illness, Mr Cuong and his family agreed to undergo the operation. The surgery was carried out by Doctor Thai in coordination with two specialists from the Vascular Surgery Department and the Ear, Nose, & Throat Department, and, additionally, with comprehensive preparation of specialist anaesthesiologists.

When entering the surgery, Mr Cuong was anesthetized with an endotracheal tube. Only through a large incision in the neck could the tumour be reached. Dr Thai carefully removed the tumour from the invasive organs, the trachea and the oesophagus. The doctor had to work bit by bit to remove the tumour without puncturing any of the organs, and carefully separated the tumour from the cervical spine so as not to affect the nerves, which could cause hand paralysis.

The most difficult part was to separate the large metastatic lymph nodes from the left jugular vein. Ganglia, which appear like chains of pebbles the size of small eggs, adhered to each other like glue, were hugged around and crushing the soft jugular vein which ran from the skull to the chest. The difficult part was to separate those pebbles from the slender vein without making any tears or damage whatsoever as this is the main vein for blood circulation from the brain to the heart. If this vein is broken, it will cause cerebral oedema, hemiplegia or even death. During the operation, an alternative vein replacement plan was also prepared just in case of any vein failure.

After nearly four hours of intense concentration of the surgical team, all metastatic lymph nodes around the left jugular were removed. Doctor Thai smiled at his colleagues and breathed a sigh of relief. Following that, the tumour removal procedure was carried out sequentially. The surgery ended after 11 hours, being a tough yet rewarding experience for all. The entire tumour and all metastatic lymph nodes were removed with no complications. One day after the surgery, Mr Cuong was able to talk and on the third day, could eat porridge without struggling.

Following the operation, Dr Phan Van Thai shared, “Mr Cuong’s will and desire to continue to live was key to the success of this surgery. His strong will helped me feel more secure and determined to treat the case. Doctors will have more motivation and confidence to perform an operation if patients cooperate well, understand the problem and have a strong determination for treatment.” 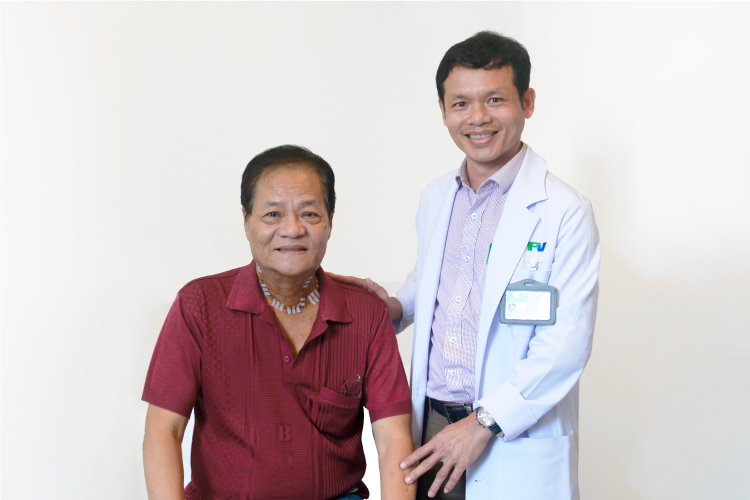 After being discharged from the hospital and when coming back for re-examination, with a bright face and a slight husky voice, Mr Cuong shared, “I visited many places for an examination, including large hospitals. Neither could I eat nor sleep when the doctors there said it was untreatable and they refused to help. However after being examined and informed about this operation and possible complications by Doctor Thai at FV, I fully believed there was a chance. The surgery is now over and I’m very happy. Dr Thai is the only doctor I trust.”

Mr Cuong’s daughter emotionally shared; “Coming to FV, besides being examined by doctors, my father was also encouraged to cope with the anxiety of the illness, which made him more reassured and motivated to overcome it. In addition, dedicated and thoughtful post-operative care made my father recover faster. Money can be earned again, but I only have one father in the world. After seeing my father so healthy and happy, we can’t thank Dr Thai and FV enough.”

After surgery, patients will be considered for continued treatment with radioactive iodine at FV. Saving patients’ lives, sharing their worries about their diseases and giving them the will to live on is what doctors of FV always hope and try to achieve. Although the journey is tough and challenging, FV will always go the extra mile to do the best for its patients.