“I wish others who suffer from this rare congenital vascular disorder, like my son did, can find out about FV and Dr Hoang. They saved us the costly fees of seeking treatment abroad which potentially could not treat the condition anyway”, shared the mother of N.T.H., a 19-year-old patient from Buon Me Thuot City. The patient was successfully treated for an extremely rare type of congenital vascular disorder known as Klippel-Trenaunay-Synchrome. This is a condition which affects one in 42,000 people worldwide.

Being initially hospitalized at FV with oedema, having red, pain, and sores on the skin on his left thigh; N.T.H. was examined and diagnosed with this congenital vascular disorder by Assoc. Prof. Tran Minh Hoang from the Vascular Surgery Department. The patient was required to be treated by laser and ultrasound – guided sclerotherapy. If his condition was not treated immediately, the patient’s leg would have become infected and the blood vessels could have burst leading to death. 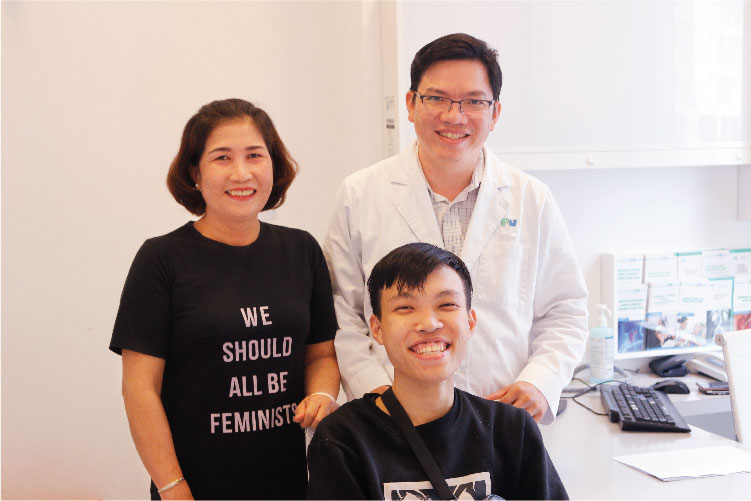 The patient had been taken for a CT scan, ultrasound and a map to mark the injured blood vessels on the patient’s leg was drawn before the endogenous laser procedure and sclerotherapy. Carrying out the procedure, Dr Tran Minh Hoang selected meticulously each malformed vein and performed the laser technique to avoid invading and injuring benign blood vessels. By using heat from the laser light to cause the veins to collapse and seal shut, the doctor then inserted a laser fibre into an enlarged vein. Furthermore, anaesthesia, combined with pumping water around the veins, helped to reduce the effects of the laser beam on the surrounding tissues and restricted scalding tissues as well as avoided causing any complications on the sensory nerve. Doctors then proceeded to inject a small amount of liquid sclerosant into the malformed blood vessels and repeated this a number of times until the subcutaneous varicose veins disappeared. After 2 hours of performing the procedure with a guided ultrasound, the patient’s symptoms decreased by up to 90 percent. N.T.H. was discharged from the hospital after 3 days and would be treated by using medicine and venous socks as post treatment.

In the follow-up examination, after the surgery, N.T.H.’s mother said; “My son underwent many examinations and treatments in domestic hospitals before, but the condition did not improve and became even more serious. I subsequently even intended to sell our property to go abroad to Singapore and seek treatment for my son there. But fate helped me and I was able to meet Dr Tran Minh Hoang, who has been the most dedicated and best doctor I’ve ever known. He not only cured the disease for my son but also often called me to ask about his condition. A massive thank you to Dr Hoang and FV’s doctors for being gentle, devoted and considerate in everything they did”. N.T.H., himself, shared; “Thank you Dr Hoang. I never thought this disease could be cured. From now on, my legs won’t suffer from the pain and I won’t be noticed for having the condition when I go out”. 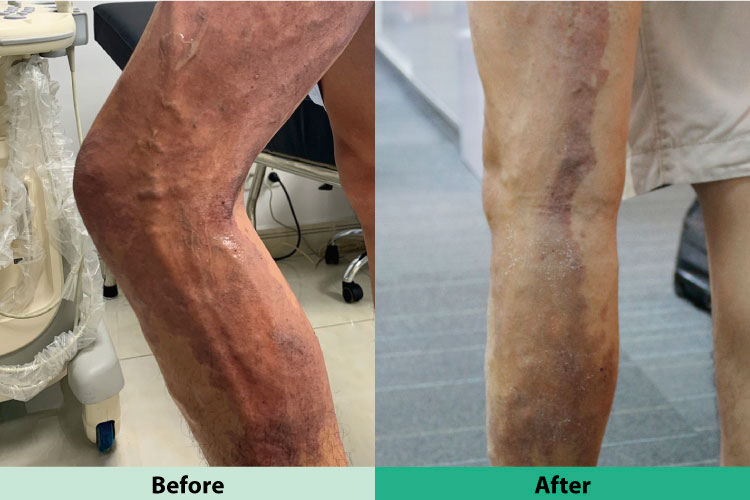 According to Assoc. Prof. Tran Minh Hoang, this was the first time the laser procedure has been applied to treat vascular malformation, combined with sclerotherapy. It is the most difficult disease in vascular malformation and if it is not treated immediately, the patient’s legs are in danger of ulceration, infection and even being cut off. We hope more and more patients will be treated with this technique so that they won’t suffer from the pain and be unconfident in life.

FV Hospital’s Vascular Surgery Department is able to provide surgical and interventional treatment for varicose veins and vascular malformation with the most advanced treatment regimen thanks to the support of the department’s modern equipment, which helps patients to feel safe when having treatment here. In addition, FV uses a modern German Laser Biolitec system and a local anaesthetic injection system to help relieve pain, not cause complications and help patients to recover quicker.

If there are any unusual symptoms on your legs, contact FV Hospital’s Vascular Surgery Department to arrange a consultation with our doctors: (028) 54 11 33 33 – Ext: 1519