Normal Life Given To Child With Lymphangioma

Born in 2016, since birth, Nguyen Thanh Hai has suffered from Lymphangioma in his tongue. The tumour had become as large as a heavy slice of meat, and had led to pushing the boy’s tongue out of his mouth. As a result, he could barely drink or eat soft foods normally, and he suffered from severe dryness in his mouth and serious infections. Thanh Hai dreamed of having a normal life where he could go to school, and talk and laugh with his friends. 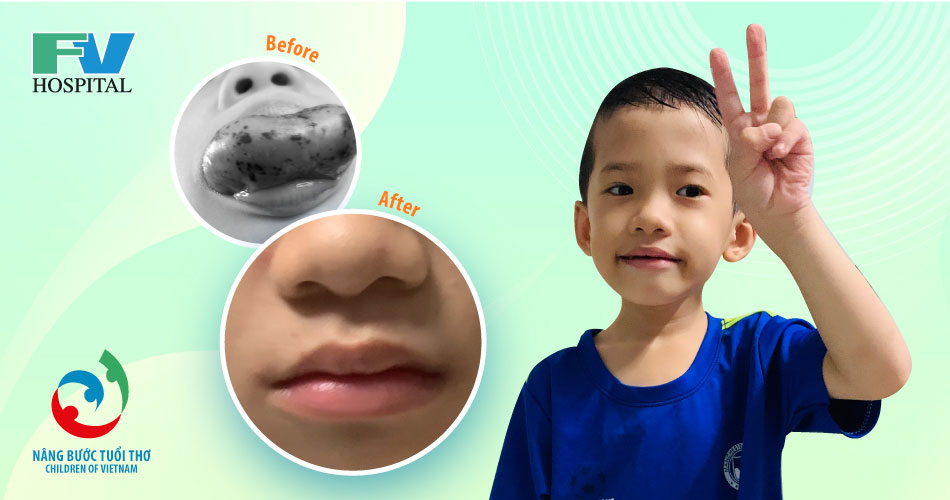 When recalling raising Thanh Hai when he was young, his mother shared, “There were nights when the whole family had to take turns staying awake to keep his tongue moist.” When Hai was six months old, his family took him to a specialised paediatric hospital in Ho Chi Minh City to seek help. Here, Thanh Hai’s condition was diagnosed by a doctor to be lymphangioma, a cyst under the tongue which needed to be removed. However, after surgery, the condition did not improve as the tumour reappeared.

After some time had passed, the family decided to take Thanh Hai back to the hospital. This time he was given new treatment which involved injecting into the tumour fibrosis. The expectation was to see a shrinking of the tumour and reduction of the size of the tongue, however unfortunately the injection did not work effectively. In fact, on the contrary, the condition became even more serious. Every two weeks or so, his tongue became infected, swollen and cyanotic, and consequently Thanh Hai was required to be taken to the hospital for further treatment.

Over the years, the condition of Thanh Hai’s tongue had not only caused him problems with eating and living normally, but also made him become shy with his peers. The family did not give up and continued to visit many places to find treatment opportunities. Due to the expensive medical treatment which was difficult for the parents’ modest income, as a result, Thanh Hai’s family faced many financial difficulties.

In mid-2019, Thanh Hai’s case came to the attention of The Children of Vietnam Charitable Fund. This organisation is specialized in providing treatment and surgery for Vietnamese children under 16 years of age who have a disadvantaged background. When the Fund connected Thanh Hai’s family, they were overjoyed and immediately took him to FV Hospital for examination and treatment.

“Today, Hai is able to talk normally. (He says to me) I know how to talk; I can talk a lot. Now I sing for you to hear …” the patient’s mother emotionally shared to The Children of Vietnam Charitable Fund. After years of suffering, finally the lymphangioma in his tongue has been removed. This was thanks to not only the advancements in medicine generally and FV Hospital doctors specifically in combining methods to improve the effectiveness of treatment, but also the dedication and love of Thanh Hai’s parents.

When first visiting FV Hospital, Nguyen Thanh Hai was seen to by Doctor Luong Ngoc Trung, Department of Vascular Surgery & Phlebology. Based on the results of the child’s MRI scan, Dr Trung took a detailed examination at the structure of the tumour. According to the doctor, lymphoma, also known as lymphatic malformation (Lymphangioma), is a type of benign lesions common in the head and neck of children. Although benign, if not treated effectively, there is a high rate of recurrence. To find the most successful method of treatment, Hai’s condition was meticulously described by Dr Trung in discussions with Dr McKinnon, a world leading expert in brain tumour and complicated tumour surgery.

The Children of Vietnam Charitable Fund scheduled Nguyen Thanh Hai to undergo surgery with Dr McKinnon in October 2019. With the expertise from Dr McKinnon, the tumour and the part of the complicated tongue cyst were removed. The doctor also helped the child to recreate the aesthetics of the tongue by cutting the flap on the sides, and shortening neatly in the oral cavity. This treatment was very important for Hai as if his condition was not corrected as this stage, he may have had issues with his jaw muscles as well as difficulty in pronouncing and communicating.

Following this treatment, after many re-examinations, signs of lymphangioma in Nguyen Thanh Hai’s tongue have not since reappeared. Thanh Hai and his family, the team of FV Hospital’s doctors, and The Children of Vietnam Charitable Fund were all extremely pleased with the news of the successful treatment results. Now Thanh Hai and his family can look forward to enjoying a normal life like everyone else and a brighter future ahead.

To be eligible, children must be:

Please share this information with your communities throughout Vietnam so more underprivileged children get the care they need!

Normal Life Given To Child With Lymphangioma