On the morning of March 11th, 2020, Mr N.T.T., a 49 year old patient from Ho Chi Minh City, was watching TV at home when suddenly he felt a throbbing chest pain, had shortness of breath and extreme fatigue. His wife, upon discovering Mr N.T.T., took him promptly to a health facility near his home. Whilst there, Mr N.T.T.’s heart was diagnosed to be unstable, and the doctors gave him medication for treatment and advised him to go to FV Hospital if the situation did not improve. That afternoon, Mr N.T.T. suffered the same severe pain again and subsequently, his family took him to the FV’s Accident and Emergency Department.

Two years prior, FV had treated Mr N.T.T. for a similar condition. In 2018, Mr N.T.T. showed signs of cardiovascular disease. When visiting FV Hospital, he was diagnosed with a mild degree coronary artery stenosis which could be treated using medication. After recovering, Mr. N.T.T. returned to his daily life, focusing on his business. Due to this condition, however, Mr N.T.T. was advised to pay closer attention to his heart and to undergo regular cardiovascular health checks from then on. As he was so dedicated to his work, Mr. N.T.T., despite his doctor’s advice, did not undergo such cardiovascular health checks. Moreover, he believed that he was now in good health, no longer smoking nor suffering from diseases such as diabetes and hypertension. Unfortunately, he subsequently learnt the hard way that this was not the case when he suddenly faced a heart attack years later.

Two years later, in 2020, Mr N.T.T. was admitted to FV hospital with a heavy chest pain. Fortunately, he was still conscious and able to communicate. FV Emergency Department’s doctors reassured him, and helped him by stabilizing his health using internal medicine and monitoring his condition. At that time, Mr N.T.T’s wife said “I was afraid he had a stroke so I took him to FV Hospital. Coming here is really reassuring!”

Based on his previous history of myocardial ischemia and the current state of his health, the doctors admitted him to undergo a Multi-slice Computer Tomography (MSCT). The results showed that the patient had coronary artery stenosis in more than 90% of his branches and they were all in urgent need of treatment. After being consulted by doctors, Mr N.T.T. agreed to undergo an intervention at FV Hospital’s Interventional Catheterisation Laboratory (Cathlab).

The Interventional Catheterisation Laboratory team is under the coordination of Dr Huynh Ngoc Long, Head of Cardiology Department and Dr Do Thanh Long,  Senior Doctor, Cardiology Department. Mr N.T.T. was interfered with stenting in all of his coronary branches which had become narrowed. From the wrist, doctors administered him with a regional anaesthesia, a needle was then inserted through the wrist into the radio artery. Following that, doctors placed a stent – a small mesh – to fix his coronary arteries, which also limited later potential narrowing. After three hours, the doctors successfully placed four stents in the lumen, including two stents connected in 96mm in length to overcome the prolonged diffuse stenosis. Mr N.T.T. gradually was able to breathe normally again and was taken to the Internal Medicine Department to be monitored and to rest. He was subsequently discharged from hospital 48 hours after.

Thanks to the modern equipment system, high-experienced team of doctors as well as the skilled coordination of the Cathlab team, the treatment process for Mr N.T.T. went very smoothly without any complications. After he recovered, he happily shared “Doctors identified the disease and treated it very quickly. Thank you doctors. In the future, I will pay attention more to my health.”

Mr N.T.T.’s case is one of many coronary artery cases that have been successfully treated at the Interventional Catheterisation Laboratory (Cathlab). FV’s Dr Thanh Long emphasized “Cardiovascular disease does not exclude anyone, even healthy middle-aged people who do not suffer from risk factors such as diabetes and high blood pressure. Therefore, when detecting any signs of the disease, we cannot be complacent and we need to treat dedicatedly. The disease can cause many serious complications, the most serious being myocardial infarction which can be life-threatening.” 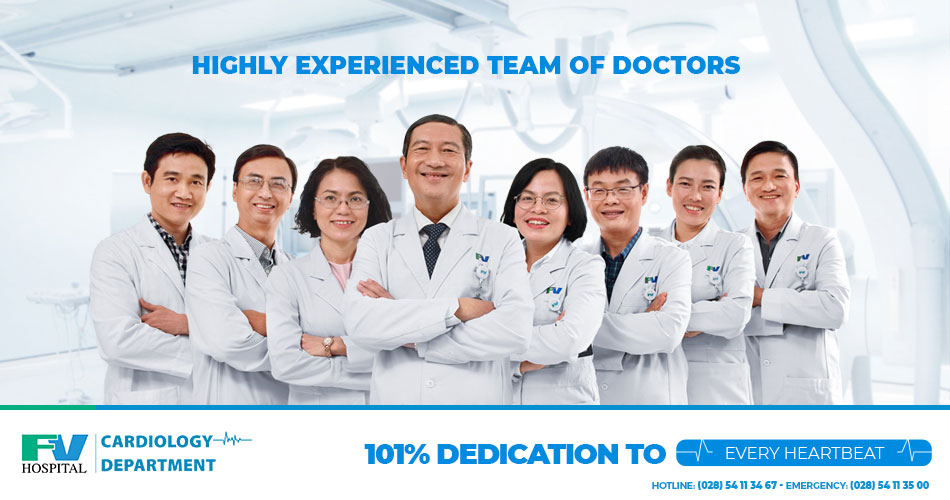 FV Hospital’s Cardiology Department provides exceptional care, thanks to its state-of-the-art and synchronic equipment, coupled with its highly experienced team of doctors, led by Dr Huynh Ngoc Long. With over 20 years of experience, Dr Long is one of the top three experts in cardiology in the entire country. He has successfully undertaken 10,000 interventions and is always ready to provide advanced diagnostic and treatment services, as well as apply comprehensive treatment plans from prevention, early discovery to diagnosis, treatment and cardiac rehabilitation.

Since May 2018, FV Hospital has launched its very own Interventional Catheterisation Laboratory (Cathlab). The Cathlab, with more than $1.6 million of investment, is a system of modern machines and equipment to best aid doctors with diagnosis and treatment of dangerous diseases. These include heart attacks, blockages of blood vessels, aortic aneurysms, valve incompetence, among others.