From 21/10/2019 to 25/10/2019, Prof. Mckay McKinnon, a world-leading expert in surgery of complicated tumours, reconstruction, and orthopaedics worked at FV Hospital to provide surgery for disadvantaged children with malformations.

Unfortunately, among the 16 children received by Children of Vietnam Charitable Fund, some suffered from severe diseases which could not be fully treated by medicine alone. However, there was hope as Prof. McKinnon was on hand to offer the best surgical care to such patients. He shared; “A little hope is better than nothing”. In addition to the effectiveness of the treatment, doctors also focused on the aesthetic orthopaedics to help these children have a better life. From the 16 cases examined by Prof. McKinnon, it was found that 4 of the cases required surgical treatment while 4 others needed monitoring for surgery at a later time. The remaining 8 cases were stable, only need to be followed up at related departments for further monitoring.

“I WAS AFRAID OF THE SURGERY, BUT NOW I AM NOT”

Truong Thien Nhan, 15 years old, from An Giang province, returned to FV Hospital for a post-major surgery examination in early 2019. After studying the MRI results of the patient, Prof. McKinnon was delighted to say that the brain area had not been invaded again by the tumour. However, owning to the fact that his health wasn’t strong enough in the first surgery, the doctor was unable to remove the entire tumour in his left eye socket and facial area. On this occasion, the doctor indicated that he would remove the maximum remaining tumour, and implant titanium to lift the eye sockets and reconstruct the eyelids to give the patient a more balanced face.

When learning that her son needed another surgical procedure, Thien Nhan’s mother was very anxious, but Nhan was the one who reassured her, he shared; “I was scared before, but now my fear is all gone!”. The tenacity of her son and the effectiveness of the previous surgery made his mother agree. On October 22nd, Thien Nhan underwent a second surgical procedure which lasted 4-hours and ended successfully. According to Prof. McKinnon, the tumour condition on the patient’s face was very complicated as it had become deep and widespread. Therefore, the surgery required meticulousness to avoid damage to the nervous system that controls the facial muscles. What was incredible was that the doctor was able to ensure the patient regain a normal appearance. The tumour was completely removed and the eyelids were lifted to make his face more balanced. 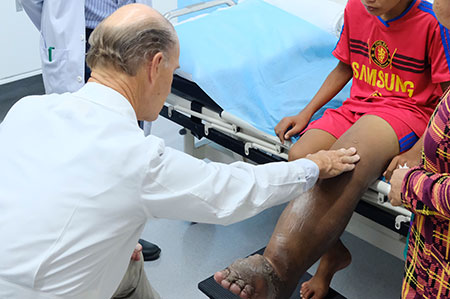 Thien Nhan was allowed to go home after just days of hospitalization for post-surgical monitoring, and now is completely healthy.

Since the birth of Le Bao An, Ms Nguyen Thi Huan has always gone through torment which cannot be put into words. Bao An has no eyes, nor eyebrows either. Instead, two skin lumps which are as big as her fists locate the eye sockets. In these extremely difficult circumstances, Ms Huan shared; “After all, it is my child, and I love her no matter what. Thank God, it is easy to raise her. When Bao An was only three-months old, she learnt how to call for her mother and father”.

Hope was rekindled when she was introduced to Children of Vietnam Charitable Fund and Prof. McKinnon. As this was a rare case, her family was psychologically prepared for the worst situation, they knew the chances of their child gaining sight were very slim. Whilst consulting with ophthalmologist Vu Anh Le, Prof. McKinnon said that the hope of regaining sight for Bao An is very little. However, her parents were keen to carry out the surgery to have the chance for their daughter to have at least a more normal appearance, which Prof. McKinnon agreed to.

On 22nd October, Bao An’s surgery was completed after 1 hour. Inside the eye sockets were two large, fluid-filled cysts that contain no optic nerve or eye structure Although the surgery couldn’t help the child gain her eyesight, the surgery helped to reshape her eye area to have a much more normal aesthetic appearance. 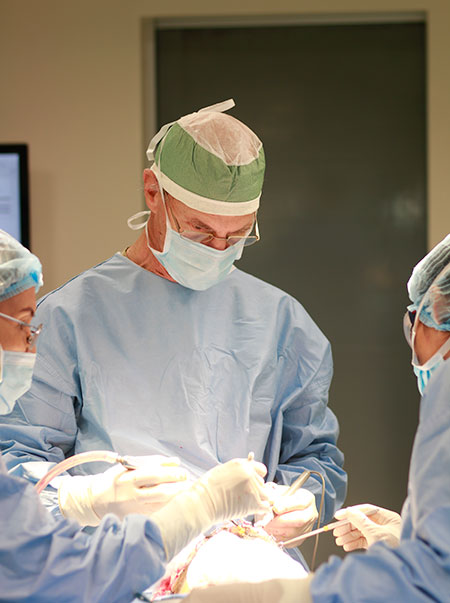 For now, Ms Nguyen Thi Huan was very grateful to the doctor from the bottom of her heart. Thanks to them, she was able to see that all her efforts were finally helping her daughter. Even now, to some extent, the doctor helped Bao An to reduce the difference in her appearance already by removing the heavy tumour on her eye. Her mother even shared; “The most important thing is Bao An is now healthy, and I can start thinking about finding a school for my child so that she will have a better life in the future. I am very thankful if anyone could tell me which school is the best and which books are the most suitable for her”.

Being born in a farming family in Ea Rok commune, Ea Sup district, Daklak province, Nguyen The Anh Kiet, 8 years old, was born with a large tumour in the area surrounding his right eye. His parents took him to many medical institutions, but the doctors at each said they could do nothing because the tumour in the eye socket was very complicated. The more Kiet grew up, the bigger his tumour grew. Recently, the tumour began to invade to his brain and compressed the optic nerve, causing his right eye to be completely blind. Seeing Kiet aching every day and being shunned by his friends because of the deformed appearance, his parents were desperate to seek help. They asked relatives to post Kiet’s story on the internet and prayed for a good doctor.

Fortunately, the news was shared by a great deal of kindness and was finally received by Ms Tran Truc Quynh, Manager of Children of Vietnam Charitable Fund.

In August 2019, Kiet first came to FV Hospital for doctors to check the condition. Then, in the afternoon of October 23rd, 2019, Kiet underwent surgery by Prof. Mckay McKinnon. Almost like the case of Truong Thien Nhan, Prof. McKinnon helped Kiet  remove the tumour and find the best way to restore his aesthetic appearance.

After nearly 5 hours in the operation room, Kiet’s surgery was deemed successful. Prof. McKinnon removed the tumour in the brain and eye socket, put the brain in its right position and used a titanium piece to block the low area of the skull to prevent the brain from being invaded again. In addition, part of a tumour inside the right eye socket was also removed. The doctor also created eyelids for Kiet which helped to improve his appearance by 70-80%.

Nguyen Thanh Hai is nearly 4 years old this year. When she was born, her parents discovered that she had strange symptoms, notably always putting her tongue out. Recalling the time, her mother, Ms Nguyen Thi Mai Thi shared; “It was very intense. The whole family took turns to take care of Hai at night just to wet her tongue for her.” When she was 6 months old, the family took her to a paediatrics hospital and learnt that she had lymphoma, a cyst which had formed under the tongue that needed to be removed. However, after surgery, the condition did not improve.

After visiting many places and searching for a lot of treatment methods, her family was eventually introduced to Children of Vietnam Charitable Fund. During their visit to FV Hospital, Prof. McKinnon provided surgery to reconstruct the tongue. It was deemed that if the surgery was not carried out early, the child will have a jaw-deviation dystonia which will prevent them from eating and talking like normal.

On the morning of October 24th, Prof. McKinnon successfully removed the tumour and cut the cyst part of the tongue which was causing the complications. Intensive interventions will be conducted as the child gets older, but for the time being, the aesthetic effectiveness and the jaw structure which caused the danger is no longer deformed.

Children of Vietnam Charitable Fund, which was jointly founded by FV Hospital and Thanh Nien Newspaper, officially began operations in 2006. Up until now, The fund has supported hundreds of cases of paediatric patients with various malformations and disabilities to return to their normal life and have the opportunity to integrate into society as well as develop like their peers. Its mission is to change the futures of disadvantaged children under sixteen years old who have been born with congenital deformities or developed serious problems as a result of disease or after suffering an accident, such as;