Swallowing Toothpicks is Dangerous as They Can Pierce the Intestine, Causing Infections and Requiring Emergency Surgery

Many people are in the habit of using a toothpick to remove food from their teeth or when serving finger foods on a plate. Unfortunately, some people swallow parts of the toothpick on purpose or by accident, which can be extremely dangerous.

FV Hospital’s General Surgery Department has performed surgeries in many cases when a toothpick has penetrated a patient’s intestine to form an abscess. Patient B.D.U, aged 72 years, from Dong Nai, was one such case. Mr B. D. U. did not know that he had swallowed a toothpick until he began to experience abdominal pain.

D. U. went to a clinic near his home when he began to feel unwell, and was diagnosed with stomach pain. Although he was prescribed medicine to treat his symptoms, the pain got worse, so B. D. U. went go to his local provincial hospital for a checkup. An ultrasound and CT scan detected a sharp foreign object in his intestine, and B. D. U. was scheduled for surgery three days later.

However, because he  was so nervous, B. D. U.’s family members decided to take him directly to FV’s Accident & Emergency (A&E) Department. Here, Dr. Phan Van Thai – Head of General Surgery, examined B. D. U.  and performed another CT scan. Diagnostic imaging results confirmed that a sharp foreign body, which turned out to be a bamboo toothpick, had pierced the small intestine and adjacent colon, and B. D. U.  was assigned emergency laparoscopic surgery.

Mr B.D.U. received anaesthesia, and surgeons operated via three small incisions, each measuring five to 10 millimetres, in B.D.U.’s abdominal wall. Dr Thai and his team removed the toothpick, which was 6.5 centimetres long, as well as the inflamed tissue and pus in abscesses which had developed where the toothpick had penetrated the small intestine and colon.

Doctors then stitched the perforations in the small intestine and colon closed, and thoroughly cleaned the abscesses. The surgery ended successfully within two hours. As a result, the patient no longer had any infection or pain, was able to eat and drink normally and was discharged from hospital a week later. 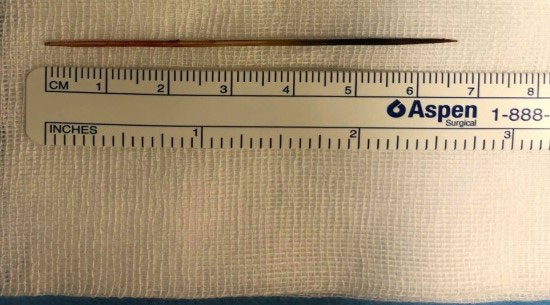 The toothpick that was taken from the abdomen of patient B.Đ.U.

“Luckily, my family decided to take me to FV Hospital and Dr Thai performed surgery in time,” says Mr B.D.U.

“Thank you, FV doctors and staff, for taking care of me during the past few days.” 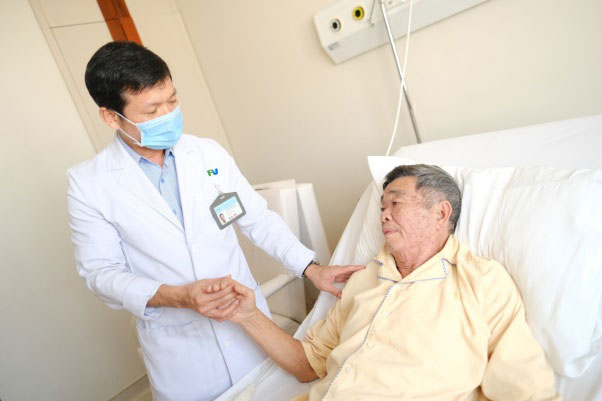 Dr Phan Van Thai says he sees many cases where people have swallowed sharp objects such as toothpicks and fish bones. If their presence isn’t detected in time, it can lead to serious and dangerous infections.

Because the foreign body has a pointed shape, when it moves through the digestive tract it can easily get entangled in the intestine and puncture the intestinal wall, causing many unpredictable complications.

In severe cases, a single perforation can progress to total peritonitis, which is the inflammation of the membrane lining the abdominal wall and covering the abdominal organs. Peritonitis is usually infectious and often life-threatening.

Swallowing Toothpicks is Dangerous as They Can Pierce the Intestine, Causing Infections and Requiring Emergency Surgery