At 14:00 on June 10, 67-year-old Singaporean patient Mr L.C.S. experienced difficulty breathing, chest tightness and dizziness before he eventually collapsed at home. Mr L.C.S. was taken to FV Hospital’s Accident and Emergency (A&E) Department by his family members. On admission, the patient’s blood pressure dropped to 88/57mmHg and his heart rate was only 40-50 beats per minute. His electrocardiogram (ECG) showed that Mr L.C.S. had signs of acute myocardial infarction. Immediately, the cardiovascular emergency procedure was implemented, and Mr L.C.S. was quickly transferred to FV’s Cathlab Cardiology Intervention Centre.

At 14:20 the same day, just as doctors were about to perform an interventional cardiac catheterisation procedure, Mr L.C.S. had a cardiac arrest. Doctors had to conduct cardiac compressions, electrical defibrillation, endotracheal intubation and intravenous drugs for about 10 minutes before performing an angioplasty.

With the help of the new generation Philips DSA FD20 digital subtraction angiography machine, doctors inserted a very small catheter via Mr L.C.S.’s wrist, moving through the blood vessel towards the coronary artery. Then, a stent (small metal mesh tube) was placed at the blockage to immobilise the blockage and facilitate blood flow. After 18 minutes, the patient’s vital signs began to stabilise and he was no longer in critical condition. Mr L.C.S. was then transferred to the Intensive Care Unit (ICU), extubated, and regained consciousness the next day before being transferred to the ward for further monitoring.

The total time from Mr. L.C.S. being admitted to saving his life via cardiovascular intervention was about 54 minutes, strictly following the “70-minute golden policy” in emergency cardiology as set out by FV Hospital. This not only requires special expertise from the medical team, but also depends on smooth, coordinated work between the departments, especially the A&E Department and Cardiology Department.

Dr Ho Minh Tuan, FV’s Head of Cardiology who directly performed the procedure, said: “Fortunately, the patient arrived at the hospital early and was treated promptly. This is the decisive factor in saving lives, or minimising complications for people with heart attacks.”

When he regained consciousness, Mr. L.C.S. said he had never been in such a situation before. Because his health was totally normal, he did not pay attention to the annual health check. After this incident, Mr. L.C.S. said “I will definitely monitor my health more closely in the future, especially heart problems.”

Mr. L.C.S also thanked Dr Ho Minh Tuan and his team for saving his life. “I have never been to FV before, but I find the service, patient care and professional style of FV’s staff very good,” he shared, happily.

In Vietnam every year, 200,000 people die from cardiovascular diseases, the leading cause of which is heart attack. According to the National Institute of Cardiology (Vietnam), only two per cent of heart attack patients are hospitalised within the “golden period”, which is within two hours of myocardial infarction. At the same time, 40 out of 100 people visited the hospital for a check-up 12 hours prior, after feeling angina caused by a heart attack. This reduces the survival rate or increases the sequelae for patients who do not receive timely treatment.

According to Dr Ho Minh Tuan, to prevent myocardial infarction, people with symptoms such as frequent chest pain, shortness of breath, fatigue, and fainting or dizziness, and people with a history of cardiovascular diseases, a diagnosis of bad cholesterol, obesity or heavy tobacco usage, need to regularly screen and monitor their heart health to prevent heart attacks. In addition, patients who have been diagnosed with myocardial infarction should maintain a reasonable diet and a healthy lifestyle, exercising appropriately, to limit the recurrence of this disease in the future. 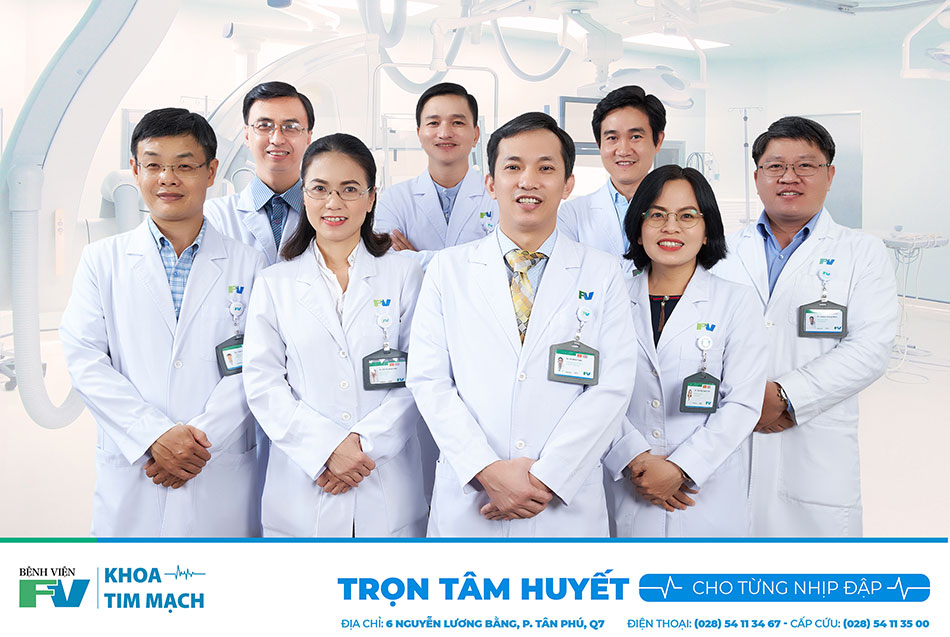 FV Hospital’s Cardiology Department features modern, synchronous equipment and a team of highly qualified doctors, each of whom has been intensively trained at well-known medical universities in Vietnam and overseas in the field of diagnosis and treatment of cardiovascular diseases such as: high blood pressure, myocardial infarction, heart failure, arrhythmia, heart valve regurgitation, venous insufficiency, congenital heart defects and fibrosis of the coronary artery.

With many years of experience working in major domestic and international hospitals and cardiovascular centres in France, Germany, Japan, Taiwan and Malaysia, doctors at FV Cardiology Department are constantly updating their knowledge of the latest innovations in medical practices, masterfully applying advanced techniques for accurate diagnosis, minimally invasive treatment and long-term effectiveness for patients.

In May 2018, FV Hospital began operating its Cardiovascular Intervention Centre (Cardiac Cathlab) with a total investment capital of over US$ 1.6 million. The Cathlab is equipped with a system of modern machinery and tools, and is an “effective arm” to help doctors diagnose and promptly treat dangerous diseases such as myocardial infarction, blockage of blood vessels and aneurysms circuit.