WHAT IS CT ANGIOGRAPHY?

Computed tomography angiography, also called CT angiography, is a test that combines the technology of a conventional CT scan with that of traditional angiography to create detailed images of the blood vessels in the body.

WHAT ARE THE COMMON USES OF THIS PROCEDURE?

Your doctor may order CT angiography to help diagnose a narrowing or obstruction of the arteries, an aneurysm, a deep vein thrombosis, a pulmonary embolism, or another vascular condition.

You may be unsuited for CT angiography if you:

WHAT ARE THE RISKS AND COMPLICATIONS?

Because CT angiography is an x-ray test, it sends radiation through your body. Although the amount of radiation for each scan is small, it can accumulate and damage body cells over time with repeated exposures. 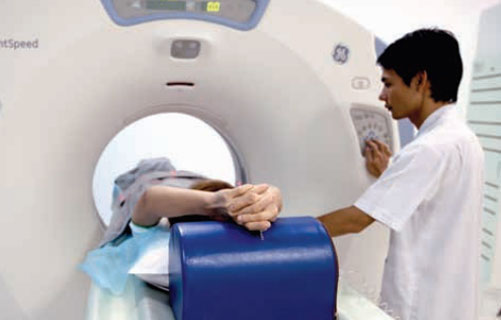 The most serious early complication of CT angiography is an allergic reaction to the contrast media. Reactions usually occur immediately and include flushing, itching, or, rarely, difficulty breathing or swallowing. Notify your doctor or the diagnostic radiographer if you experience any of these symptoms. Sometimes contrast media leaks under your skin at the injection site. This can cause redness, swelling, or pain. The contrast media can also damage kidney function depending upon the amount of contrast media used and whether you have any kidney problems that already exist.

HOW SHOULD I PREPARE FOR THE EXAMINATION?

You will be required to fill a questionnaire and to sign a consent form before your CT angiography. If you are or may be pregnant, kindly inform your doctor.

Your doctor will ask you to avoid foods and liquids for about 4 hours before the test. You will probably be allowed to continue taking any prescribed medications, but ask your doctor before the exam to be sure.

Before the test is performed, you will be asked to change into a hospital gown and remove all jewellery and other metal objects, which can interfere with x-rays.

WHAT WILL I EXPERIENCE DURING THE PROCEDURE?

In order to get the best quality images, you will need to lie very still on the scan table which passes through a donut-shaped gantry that houses the scanning equipment. The machine is quiet and relatively open; only the part of the body being examined lies inside the gantry. As a diagnostic radiographer operates the scanning machine in another room, he or she watches and speaks to you through speakers in the CT scan room.

Before the x-rays are taken, the contrast media will be injected into a vein in your arm or hand using an automatic injector machine, which controls the timing and rate of injection. The machine may continue to inject contrast media into your vein throughout the test. The contrast media may make you feel flushed and warm, and it sometimes can produce a mildly sick-to-your-stomach sensation.

When scan starts, an x-ray tube slides around the gantry, passing narrow beams of low-dosage x-rays in an arc over the body. You must remain very still as the CT scanning machine operates. The diagnostic radiographer or a recorded voice message may ask you to hold your breath for 10 to 25 seconds at a time, because even the motion of breathing can blur the images. These beams reflect onto a detector positioned opposite the x-ray source. The detector transmits the x-ray energy to a computer, which transforms the information about the reflected energy into a 3D image. The sophisticated computers allow the radiologist or the diagnostic radiographer to create images from different angles.

The entire procedure usually takes 10 to 20 minutes to complete.

WHAT HAPPENS AFTER THE PROCEDURE?

There are no restrictions after a CT angiography and you can resume normal activities immediately.

You should drink plenty of fluids following the test to speed excretion of the contrast agent and to guard against dehydration.

WHEN CAN I EXPECT RESULTS?

Your examination will be reviewed by a radiologist. Your referring doctor will be informed immediately of any suspicious findings.  You will receive a formal written report on the same day or within two (2) days depending on your clinical and diagnostic requirements.

HOW DO I SCHEDULE THE EXAM?

For further information and appointments, kindly contact our Imaging Department at (08) 54 11 34 00