After many years of failed treatment for rectovaginal fistules, patient recovers thanks to FV’s unique approach

When coming to FV Hospital for a follow up appointment in May 2020, Ms L.B.V. shared; “After my treatment at FV, I feel so happy and very excited. During my life, I used to be so self-deprecating and self-conscious in the past because of the condition I suffered from. Unlike most people, defecating has always been a difficult problem for me. Luckily, I came to FV and met Dr Le Duc Tuan. Thanks to his wholehearted efforts, I can finally have a stable life at both home and work.”

After many surgeries to treat an aneurysm, Ms L.B.V., a 32-year-old patient from HCMC, had to then undergo three surgical procedures for vaginal rectal leakage. This took place between 2017 to 2018 at a number of large hospitals in Ho Chi Minh City. The results, however, were not good. Dismayed, Ms L.B.V.’s hope was finally reignited when, in April 2019, she was introduced to the General Surgery Department at FV Hospital for consultation and treatment.

Ms L.B.V. informed the doctors that as she had a long intestine, developed since birth, she had always found it hard to defecate. Throughout her life, she often had to use laxatives and when receiving hospital consultations in the past, previous doctors diagnosed that Ms L.B.V. should receive a colon enlargement through surgery. She subsequently underwent many operations, so many in fact that Ms L.B.V. cannot remember exactly how many. From 2017 to the end of 2018, it was estimated that the patient underwent nearly ten surgical procedures. These consisted of three colonic surgeries, two surgeries to remove intestinal skin to make an artificial anus, and two surgeries to close the artificial anus. Despite all the procedures, however, her condition had not improved. In addition, the patient also realized that her stools were being discharged into her vagina. Since that time, she could not defecate by her anus, and her stools instead passed through her vagina uncontrollably.

When coming to FV Hospital for treatment, Dr Le Duc Tuan, a senior doctor in the General Surgery Department, diagnosed the patient with stenosis of the colon and rectal-vaginal leakage. He advised that Ms L.B.V. should go under a long treatment regimen to treat the condition. Having undergone many surgical procedures in the past, with high expense and no success, her family refused to follow the regimen. However, due to the confidence and devotion of the doctor, her and her family finally agreed.

As a first step of the treatment regimen, Dr Tuan carried out periodic dilatation of the rectum colony every four weeks from April 2019. This was a test of patience for not only the patient, but also the doctors as every time there was a dilatation, the rectum colony only stretched less than a millimetre. During follow up examinations, the rectum colony was still as narrow as before but it gradually was becoming easier to stretch a little bit. The patient was very anxious, however the doctor insisted they take it step by step. If the rectum colony was stretched quickly with a large device, it could cause a rectal tear or even a vaginal rupturing. In August 2019, however, after four months, the narrow space had widened, stretched enough and was stable. This was the ideal stage for surgery. The artificial anus was indicated to move out any stools, helping to make the vaginal clear in preparation for the surgery to repair the leak.

After a multi-disciplinary consultation with Dr Yann Drean, Head of the Obstetrics and Gynaecology department, Dr Le Duc Tuan agreed to use the Martius Flap technique in the surgical procedure for the patient. Through this method, the area between the vagina and rectum would be filled with the patient’s own tissue ensuring no rejection of the graft. This tissue would also have a vascular stem which will continue to grow to maintain a stable filling of the area with the leaking tissue. Such advantages are not possible with the use of artificial fragments, and an artificial graft also has the disadvantage of being more prone to becoming infected.

This method, however, does have its own problems concerning the psychology of the patient as they may be too anxious to bring the stool bag. Doctor Tuan remembered that the patient asked: “Could you keep on operating without making the artificial anus? I will take responsibility if it leaks.” To ensure the safety for the patient, however, the doctor persuaded her to have the artificial anus for a short time. By the 29th August 2019, the patient was deemed ready for the surgery with the support of experienced anaesthetists. The Martius Flap technique is was then performed by making an incision in the middle of the groin to remove fat from the large lip to insert into a septum that fills the hole between the vagina and rectum. The technique of removing fat tissue from the large lips and preserving intact blood vessels to nourish this fat tissue is key, being a great challenge for the surgical team. Just one wrong move, breaking the blood vessel stem by less than a millimetre in diameter would make the procedure unsuccessful.

Aesthetics are incredibly important when administering this procedure as it greatly affects the psychology of patients. In this case, the fat tissue removed from the large lips had grown back and the vagina remained comprehensive, helping the patient feel comfortable and no longer worry about any vaginal imbalance. By the end of December 2019, the doctor decided to close the artificial anus, the patient was then able to defecate normally with the vagina having no stools. With the medical procedure being completely successful, L.B.V.’s anxiety and concerns were put to rest

Ms L.B.V shared: “When I came to FV Hospital, I received enthusiastic support from the doctors throughout my consultations and planning for my treatment. Moreover, Dr Tuan was the individual to perform the surgery. I was very pleased as I felt my condition was being monitored carefully. Now, I can defecate as normal without using medication. Thank you so much to Dr Tuan for helping me to have a normal life”. 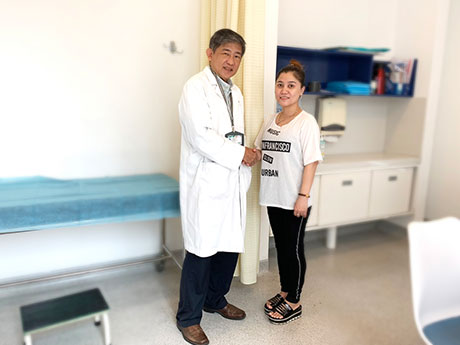 Dr Le Duc Tuan said; “After 5 months since being discharged from the hospital, the condition of Ms L.B.V. has improved significantly, with the leak now completely gone. She now feels very comfortable, confident and happy and, being the doctor who was connected directly to the patient, I also feel very pleased that the patient has overcome this condition.” He continued to share that Rectovaginal fistules affected not only her daily life, work, and sex life, but also her health due to infection to surrounding organs. The surgery for this condition is very difficult, and many people have to face such problems when undertaking surgery many times. Additionally, if the surgical attempts fail on too many occasions, the patient could be faced with having an artificial anus for life. In this case, however, with the trust of the patient and the enthusiasm of Dr Le Duc Tuan, the surgery was performed successfully.