Dr Stéphane Guero shares his magic with children in Vietnam

Dr Stéphane Guero, a “hand magician”, from France, often visits FV Hospital to correct hand deformities in children. Dr Guero is dedicated to performing surgeries for transforming fingers, to restore their holding function, to apply bone grafts and to correct syndactyly, among other procedures.

During his working trip at FV Hospital’s Orthopaedics and Hand Surgery Department from 21st to 26th November 2016, Dr Guero provided consultations for 32 patients and surgeries for 13 paediatric patients, most of whom were from the northern provinces of Vietnam.

One of these cases was a foot enlargement while the rest were hand surgeries, including common cases of ectrodactyly that required finger transformation surgery, for example, to transform an index finger into a thumb; or brachydactyly, creating a finger from a donor toe. Dr Guero said that, prior to coming to FV Hospital, he had addressed 85 cases of transforming an index finger into a thumb during his career, completing an additional three cases during this working period at FV Hospital.

Dr Guero often performs surgical corrections for complicated syndactyly (when fingers are conjoined and cannot be identified precisely), to transform digits in children with missing thumbs so that they regain their holding function, and to deliver bone grafts for patients with congenital polydactyly. 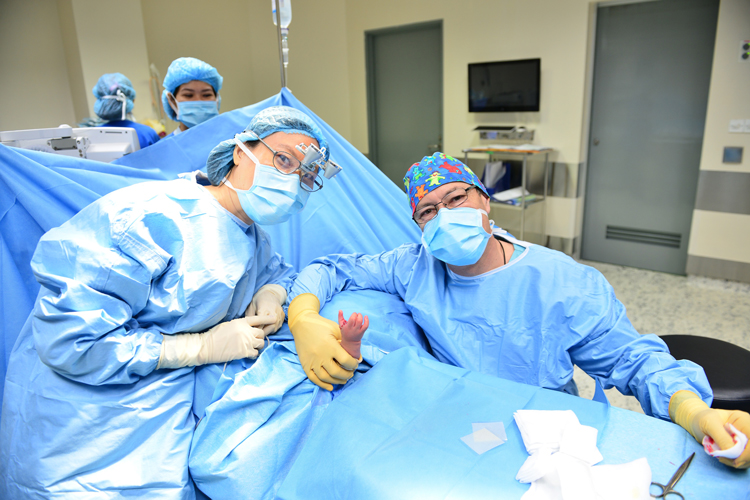 On the afternoon of 25th November, Dr Guero conducted a successful surgery on Phan Hoang Viet Tung, born in 2015, from Hoang Mai District, Hanoi. Dr Guero transformed an index finger into a thumb on his right hand. 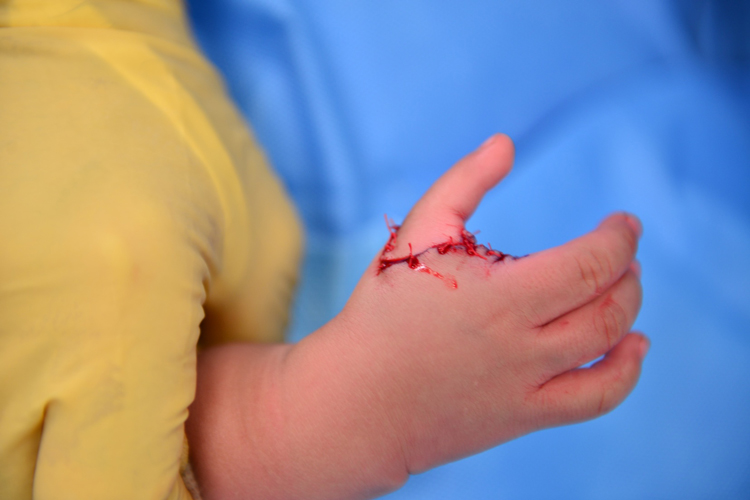 In 15-month-old Trinh Khanh Linh’s case, her right thumb was very small and could not hold anything while her left hand did not have the radius wrist bone and her wrist’s external muscle and left thumb were missing. Her left hand also curved down towards the wrist instead of aligning with it.

The surgery to transform Linh’s index finger into a thumb and restore her ability to hold objects was conducted on 26th November by Dr Guero. She was expected to be able to hold a cup within two months of the surgery.

Linh is scheduled to undergo three other surgeries to correct her left hand in early 2017. The first operation will be in performed by Dr Vu Hoang Lien from FVH’s Hand Surgery to place the external fixed appliance.

Linh’s parents were instructed to adjust this appliance in three months to regain the alignment between Linh’s hand and wrist. The second surgery will then be performed to remove the appliance and fix the hand. During the third surgery, Dr Guero will transform Linh’s second digit into a thumb.

Mr. Trinh Tuan Anh, Linh’s father, said that he and his wife were very happy to know of Dr Guero’s work at FV Hospital and knew that this was the best chance to get their child’s hands corrected.

Asked why he returns to Vietnam every year despite his very busy schedule, Dr Guero smiles and says: “Because many Vietnamese kids are waiting for my return.”

In cases of complicated deformities, Dr Guero uses the Sonopet ultrasonic aspirator, which allows fine dissection while ultimately minimizes bleeding. Consequently, it is very helpful in the removal of diseased tissue without damaging the important components, such as blood vessels and nerves, and reducing blood loss and possible post-surgical complications; patients also benefit from a shorter recovery time.

In every aspect of his work at FV Hospital, Dr Guero works closely with doctors here to provide hand surgeries. FVH’s doctors follow up with post-surgical visits and assist patients in need of physical therapy to restore their hand functions.

With more than 20 years of experience in hand surgery, typically for children, Dr Stéphane Guero is recognised as a “hand magician”, working magic for hundreds of children in Vietnam with his successful treatments.

Dr Stéphane Guero shares his magic with children in Vietnam