On August 28th 2019, the Children of Vietnam Charitable Fund cooperated with FV Hospital and performed surgery for H Miri Ăm Ksơr, 8 years old, from The Rade ethnic group. The operation was performed to remove a 4-kilograms tumour from the patient’s back. All the costs, including transportation, consultation, treatment fees, such as fibre injection; and the surgery, were all sponsored by the fund.

Doctor Luong Ngoc Trung, a surgeon from the Vascular Surgery & Phlebology Department, and leader of the surgical team, said that it was a very special case. The patient had a large tumour, which was about ⅓ of her weight, her weight being 17.5kg. The tumour caused a lot of complications for the patient as it put pressure on her cervical vertebrae, spine, hip joint, and bones in her legs. Moreover, the health of her organs could threaten her health and the physiological appearance also could affect her psychologically when she grew up. When being examined at FV Hospital, the patient was malnourished and suffered from scoliosis due to the tumour, which had led to her left leg being twice as large as her right one. As a result, the surgery couldn’t be carried out immediately but only after injecting fibre to treat the vascular malformation injuries. This procedure was essential as it avoided the risk of a serious haemorrhage which could have led to death. 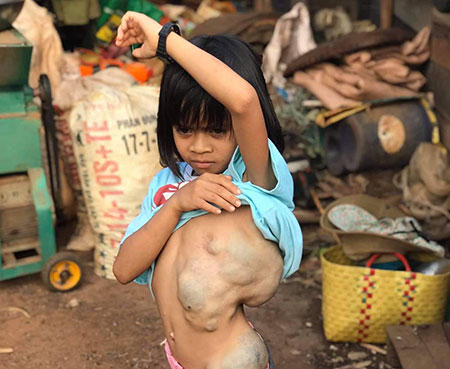 During the diagnostic imaging process using MRI, Doctor Luong Ngoc Trung invited Doctor Pierre Jaillot, Head of Imaging Department, to discuss the vulnerability level, the structure and the flow of the blood vessels. Doctor Trung defined exactly Ăm Ksơr’s condition, the patient was suffering from venous vascular malformation which also led to lymphatic disease. Doctor Trung said that she could be treated by injecting fibre to treat the unhealthy blood vessels. The first injection was carried out on March 26th, and each following injection was done after 30 to 45 days. In every follow-up examination, Doctor Trung followed the patient’s progress and realized that the medicine had been efficient in its objective. Subsequently, at the beginning of August 2019, all the tumours on her body had reduced by more than 70% and a surgical procedure could be carried out. 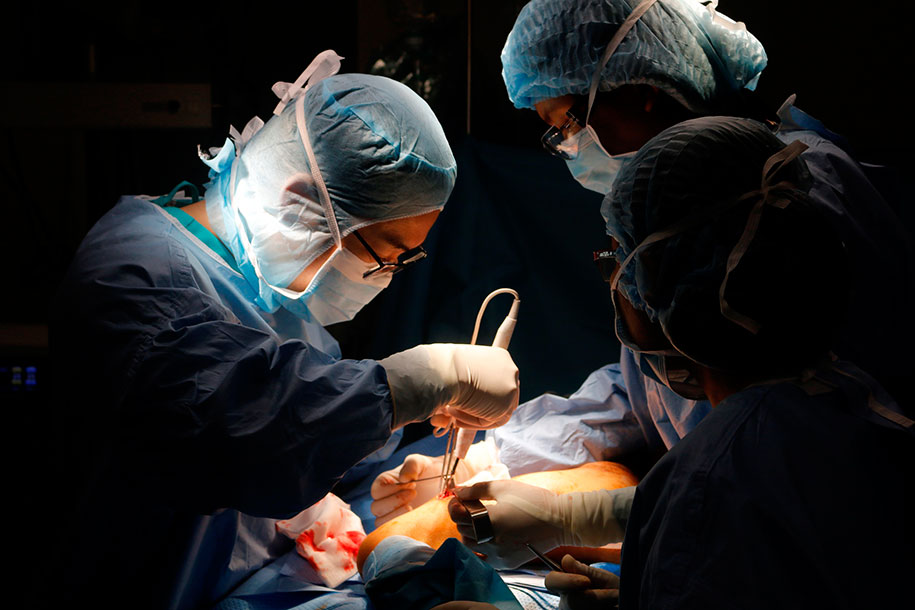 On the morning of August 28th 2019, Ăm Ksơr underwent surgery to cut off the vascular malformation which appeared on 5 places on her body, from her back to her left leg. The surgery lasted about 6 hours and was successful. This was thanks to the 14-year experience in Vascular Surgery of Doctor Luong Ngoc Trung whose knowledge of the efficiency of the medicine was essential in making the tumours reduce in size. Doctor Trung helped the patient to reject the majority of malformed blood vessels, the remainder was injected with fibre to continue to disintegrate them. In addition, doctors also focused on preserving her skin and keeping the aesthetic features on her body after the wound had healed. 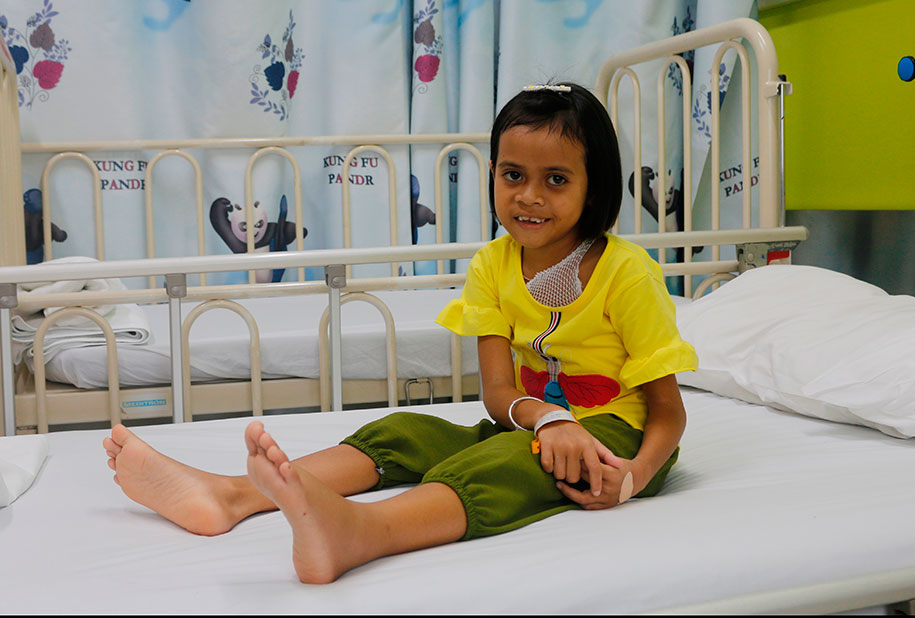 Ăm was discharged from the hospital following 6 days of postoperative care. Doctor Trung shared; “The surgery was successful based on the correct diagnosis at the beginning to ensure the most effective treatment. At present, the patient has been treated optimally and continues to follow the recovery process. A lucky thing for her is that the injuries deep inside her body such as in her liver, kidney, spleen were not so serious”.

“PARENTS, MAYBE I CAN NOT LIVE LONGER!”

Ăm Ksơr was born in a disadvantaged family which had 4 children. When she was 8 months old, her parents found out that she had a lot of purple spots on her tongue and mouth. They subsequently decided to take her to see numerous doctors but no one was able to support her. As time went on, she grew up and those spots developed into tumours from her back down towards her left leg, they gradually grew. Her family continued to take her to  paediatrics hospitals in the city, and she was treated by arteriosclerosis therapy to control the disease. Despite this, the tumours developed becoming larger and larger. Due to financial circumstances her family lost all hope and accepted that she would grow up like this.

The first impression about Ăm Ksơr is that she is a girl who has beautiful eyes who always smiles when anyone asks her something. Due to her positive manner, no one thought that she was suffering from a serious disease until the tumour became so large, it appeared she was hunchbacked over. Day by day, she rode a bicycle to school, studied and had fun like any other child. One day, however, she said to her father: “My schoolmates often tell jokes about me, I’m very sad, maybe I can’t live longer because of this disease”.  Her father, Mr Y Josuê Kser, emotionally shared with us.

At the beginning of 2019, through an introduction of an acquaintance, her family came to the Children of Vietnam Charitable Fund.  When remembering the case, Ms Tran Truc Quynh, the Children of Vietnam Charitable Fund Manager shared that the patient, H Miri Ăm Ksơr couldn’t hide her emotions. Ms Quynh also shared; “As many other places denied this case, I was very happy when Doctor Trung said it could be treated. When this case was successfully treated, I was proud and very happy”.

The happiness of Ăm Ksơr and her family filled the heart of Doctor Luong Ngoc Trung as well; “I understand the emotion of the parents, both of them want their children to be healthy. With my ability, I try my best to help her as well as others to be medically treated. I hope there will be more children I can support through the Children of Vietnam Charitable Fund at FV Hospital, as the hospital has the best facilities and equipment to support them”.

When saying goodbye to the Children of Vietnam Charitable Fund, Ăm Ksơr and her parents were still extremely happy. 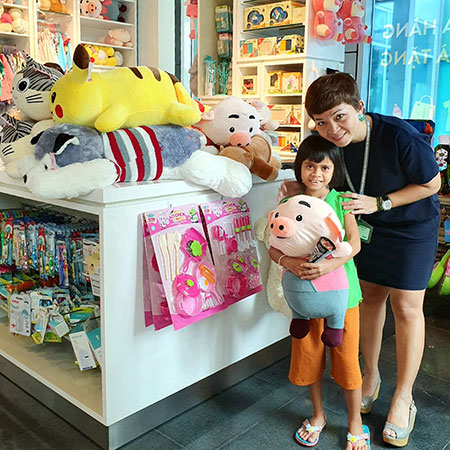 Now, Ăm Ksơr will attend the start of a new school year ceremony with friends and celebrate her 9th birthday party a few days after. This will be the first birthday in her life where she doesn’t have a tumour on her back.

Children of Vietnam charitable fund has been found and sponsored by FV Hospital since 2006. If you find any youngsters in need, please contact the Fund via hotline, website or facebook.

To be eligible, children must be:

Please share this information with your communities throughout Vietnam so more underprivileged children get the care they need!