Facing cancer, many people refuse to be treated because they fear they will suffer from pain and that they will lose the fight when they accept to have treatment, but it is not sure whether the result will be as they expected.

“I WOULD RATHER DIE THAN USE A COLOSTOMY!”

Mrs Tran Thi Lien from District 7, HCMC, was over 70 years old when she suddenly found out she had colorectal cancer while she was enjoying her retirement. The first symptoms were bloody stools which continuously lasted for one week. Being concerned she visited a large hospital in the city to be examined. After the endoscopy, doctors announced that she had colorectal cancer and should be admitted to the hospital to undergo urgent surgery. According to consultants, the tumour which was in the lower part of her large intestine near the anus would be removed and she would have bowel movements instead through a colostomy outside the abdominal wall. After the surgery, she would then be referred to an oncology hospital to undergo the radiotherapy. However, she was so shocked to hear this news because she could not imagine having to use a colostomy for the rest of her life, sharing “I would rather die than use a colostomy!”, and left the hospital being very concerned.

When coming back home, Mrs Lien continuously dwelled on the idea that she would be the same as other colorectal cancer patients, having to live with a colostomy bag and spending a long time at the hospital to wait for her turn to undergo chemotherapy or radiotherapy. Mrs Lien’s children even insisted they would leave their jobs to take care of her instead, However, loving her children so much, she didn’t want to bother her happy family due to this disease. Her offspring were very concerned about her health and so, with friends, tried to persuade her to undergo surgery to save her life but she insisted; “I would rather die”. 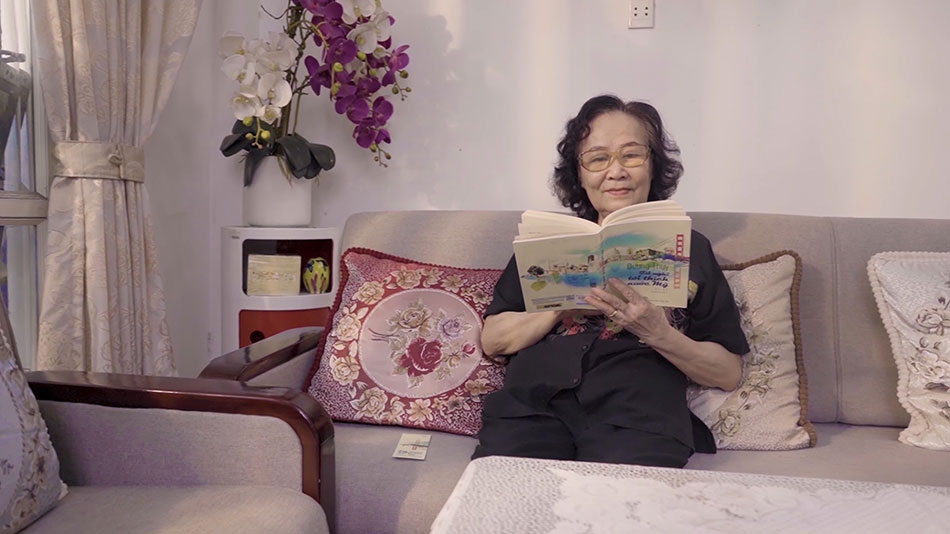 Mrs Lien detected her cancer in 2014 when she was 73 years old. At that time, and insisted on not receiving surgery to treat her cancer condition. Her children were very worried upon hearing this, fearing that the disease would become more serious and they searched everywhere to look for other possible treatments. Following the advice of relatives and friends, Mrs Lien’s family chose Hy Vong Cancer Care Centre at FV Hospital to seek a consultation.

At Hy Vong Centre, Mrs Lien was examined by Dr Vo Kim Dien, who has 30 years of experience in cancer treatment and radiotherapy. He checked the tumour carefully and found that it was far from the anus by about 5cm (50mm). Based on this, Dr Dien said she could be cured by performing radiotherapy first to diminish the tumour. If the distance between the tumour and the anus had stretched to 6cm, they would be able to perform surgery to remove the tumour as well as make the anus work normally as it had been before. Due to the dedicated consultation and explanation from Dr Dien, Mrs Lien agreed with the treatment regimen. She said; “the doctors promise that I won’t have to use a colostomy and suffer from hair loss; therefore, I agreed to be treated”.

Within one month of radiotherapy at Hy Vong Centre, the tumour diminished significantly. She was extremely happy when the doctors announced that the surgery could be performed as planned. While waiting for the wound to heal, she had to use a temporary colostomy. One month after the wound healed, however, her rectum was reconnected and so the worry of using a colostomy long term was completely removed. She continued to use medication to prevent the risk of cancerous cells to develop. Due to her old age though, she encountered kidney failure in the early stage of using the medication. However, the doctors followed and intervened immediately, so it was not a major concern. One week later, Mrs Lien came back home, and doctors advised her to take follow-up examinations regularly every 3 months in the first 2 years and every 6 months after that.

Up until now, it has been 5 years and there hasn’t been any signals of cancerous cells after every follow-up examination. Mrs Lien looks to be successfully beating the disease. Remembering when she was undergoing treatment, Mrs Lien shared; “I was looked after by doctors and nurses here, so I felt easy and comfortable. I even didn’t allow my children to sleep in the hospital to take care of me because the nurses took care of me so well. For this reason, my offspring had peace of mind and I could feel safe and sound when being treated”. Mrs Lien is healthy now and reads books to relax as well as enjoys playing with her grandchildren every day. In fact, she looks so radiant, many people don’t believe that she is 78 years old.

In the struggle with cancer, besides specialized skills and techniques, the chance to beat this disease depends on the cooperation of patients and their relatives. Therefore, in addition to medical consultations, patients need to be psychologically supported to motivate and encourage them to bravely overcome this condition. In addition to the convenient facilities and modern equipment, Hy Vong Cancer Care Centre at FV Hospital also has a team of experienced doctors and medical staff who are dedicated to offer consultations and plan suitable treatment regimens for every patient. This helps patients not only feel comfortable, but also receive the most effective treatment.