The leg of a Spanish travel blogger was nearly severed in an accident. Here, he shares the story of how FV doctors saved his limb and his life

Juan Por El Mundo, a Spanish travel blogger on a long trip around the world, has just returned to Vietnam to visit the doctors who saved his leg in a serious accident five years ago, and to complete the journey he had planned.

The “unforgettable” experience of a young man who loves to travel

Five years ago, a 30-year-old Spanish man came to Vietnam aiming to take a trip across the country by motorbike. The trip quickly turned into a nightmare. On the journey to explore the outskirts of Ho Chi Minh City, Juan was suddenly hit by a truck, his left leg almost severed in the impact. Local people in the neighbourhood used bamboo tubes to temporarily brace his injured legs and called an ambulance to take him to FV Hospital. 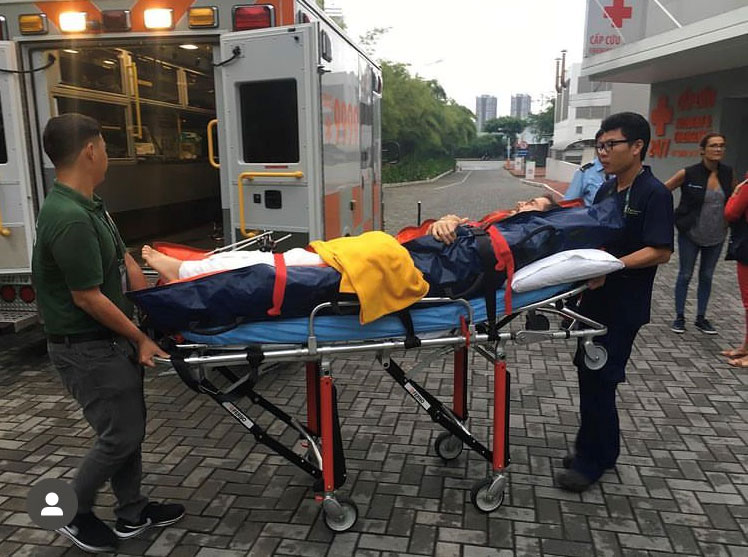 The Orthopaedics Department team on duty that day was led by Dr Truong Hoang Vinh Khiem. The patient arrived in a state of traumatic shock, his left leg crushed and leg bones exposed.

Juan Por El Mundo was extremely panicked. As a physiotherapist, he understood how serious his injury was, and the thought of losing his legs was terrifying. However, Dr Khiem reassured him that the team would do everything in their power to prevent that from happening.

“Witnessing the consequences of this severe accident in a young patient, I was determined to find ways to preserve Juan’s leg,” said Dr Khiem.

Juan’s injuries were extremely serious: his blood vessels and nerves were crushed and broken. The temporary bandages strapping Juan’s legs to the bamboo tube had introduced dirt, causing a very high risk of infection—the most worrying aspect of any surgery to repair injured limbs.

Dr Khiem watered and cleaned the wound continuously before performing surgery and attaching an external fixation structure to the patient’s skeletal system so he was unable to move his damaged leg. Dr Khiem then tried to restore the vascular system and blood flow to the limb. “I had to save every bit of soft tissue to have enough to cover the bones,” adds Dr Khiem.

The surgery was successful after four hours of working under intense pressure to save Juan’s leg. During postoperative care, Juan was closely monitored so that any infection could be immediately controlled. After three weeks in the hospital, Juan had made a spectacular recovery. He returned home and continued physical therapy until he had fully recovered his leg’s functions.

Recalling Juan’s limb-saving surgery, Dr Khiem said that it ended in success thanks to the efforts of the whole team and the capability to coordinate smoothly across specialties at FV. At the same time, in such a severe case, there was an element of luck that Juan hadn’t bled out before he reached FV and that the damage to his leg wasn’t beyond repair.

Juan returns to Vietnam to complete his unfinished trip

For Juan, August 19, 2017, is an unforgettable date—this was the day he was involved in an accident and was treated by FV doctors, and the day he feels he got a second chance at life.

“It was a time of terror and panic” Juan recalls. The male blogger considers himself lucky to be saved by dedicated doctors.

“When I was brought into the operating room, I was reassured with smiles and kind encouragement. Everyone treated me very well,” he adds Juan. This kindness and care particularly struck a nerve as Juan was in a foreign country with no relatives nearby. When he opened his eyes to see that he still had his legs intact, Juan was filled with happiness and gratitude. 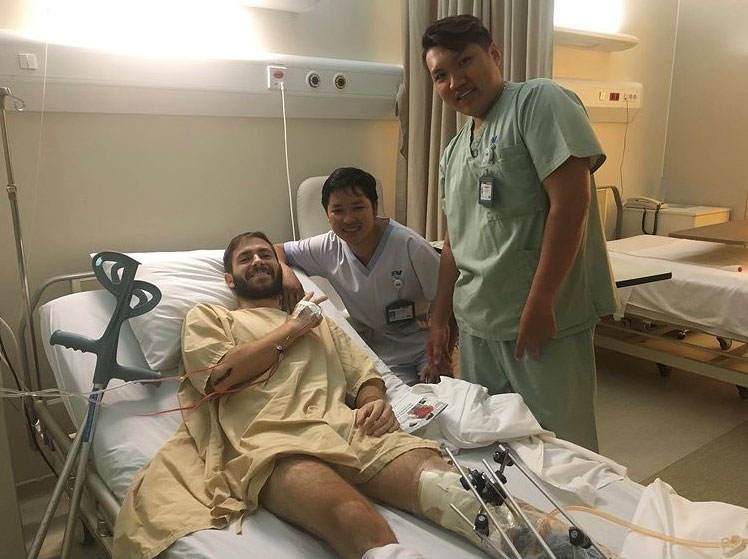 Juan is very happy to wake following surgery and see that his leg had not been amputated after his terrible accident (Photo: NVCC)

“My legs have recovered well and I am living my life as before. I can play sports, dance, play football, and ride a bike,” says Juan. After this accident, Juan was even more determined to continue his work as a travel blogger, travelling around the world and sharing his story.

Returning to Vietnam, in addition to completing the unfinished trip from five years previously, Juan also wanted to visit FV Hospital to thank those who gave him his second chance at life: “I want to say thank you from the bottom of my heart to Dr Khiem and all the staff at FV Hospital for saving my legs, taking care of me and treating me during this difficult time.” 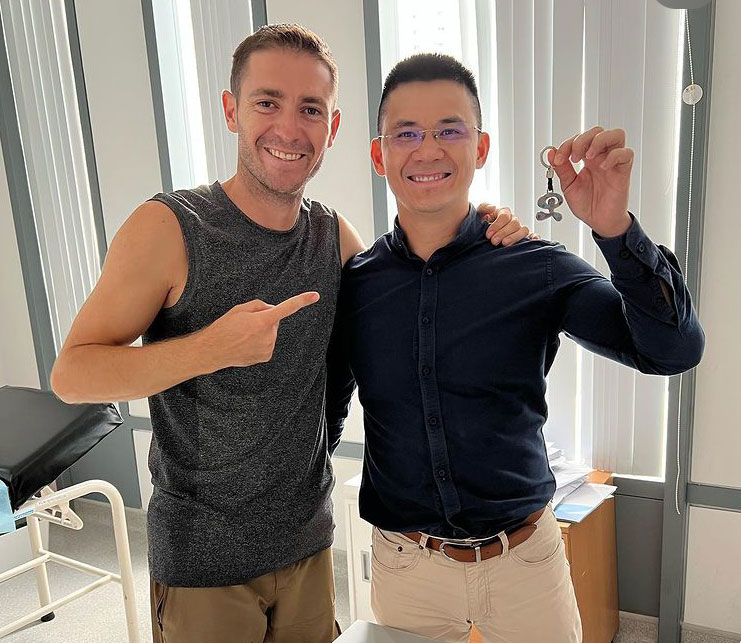 Juan returns to FV Hospital to thank Dr Khiem and other medical staff for saving his legs (Photo: NVCC)

Dr Khiem was surprised to see the patient he had treated five years ago. “I am very happy to have saved the young patient’s leg, and that he is able to return to a normal life, even travelling around the world something that I don’t believe I could have done, even if I had wanted to,” says Dr Khiem.

The leg of a Spanish travel blogger was nearly severed in an accident. Here, he shares the story of how FV doctors saved his limb and his life