In Vietnam, accidents account for most anterior cruciate ligament (ACL) injuries experienced by our patients. In developed countries, 80 per cent of patients incur ACL injuries while playing sports. Whatever the cause, FV Hospital’s Orthopaedics Department performs arthroscopic ACL surgery reconstruction to reduce future knee complications and promote a full recovery.

I met with Mr. Jean-Benoit Lanca, a 44 year old Canadian teacher at CIS, during one of his visits to FV Hospital’s physiotherapy clinic. Jean-Benoit was completing his ACL reconstruction rehabilitation programme following his surgery performed by Dr. Phat at FV Hospital. He is on the road to recovery, and can almost walk as fast as he did before the operation. He will complete his recovery after a series of physiotherapy seasons, after which he should be able to participate fully in an active lifestyle.

Two months ago, Jean-Benoit visited FV Hospital with pain and instability in his knee, which resulted from a damaged ACL. His condition prevented him from doing exercise, playing his favourite sports, and playing with his children.

The ACL is one of the major stabilising ligaments in the knee and helps prevent the leg from buckling due to instability in the knee. There are two cruciate ligaments located in the centre of the knee joint: the anterior cruciate ligament (ACL) and the posterior cruciate ligament (PCL), both taking on the role of maintaining knee stability. If severe injury occurs to one of these ligaments, the knee loses a great deal of its stability. When a tear, break or other injury to the ACL occurs, most patients experience a rapid onset of knee swelling, and some suffer from knee pain or develop a buckling and/or popping sensation when attempting to move. 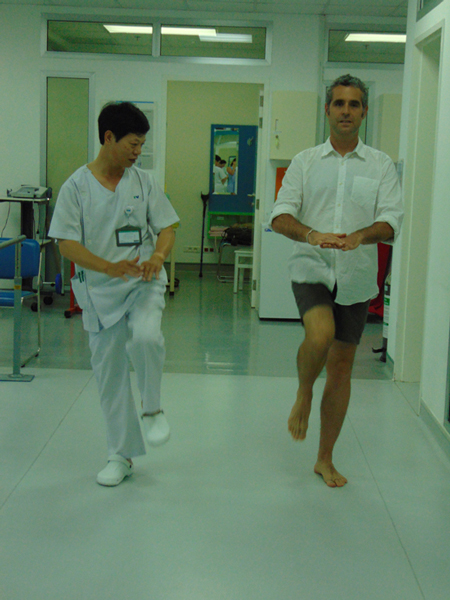 The initial treatment of an acute ACL injury often includes ice, anti-inflammatory medication, and physiotherapy directed at restoring the range of motion of the injured knee. However, for long-term recovery, surgical treatment of the torn ACL usually involves an arthroscopic surgical reconstruction of the injured ligament. In the interview, Dr Phat shared: “Although a number of different types of tendon have been utilised to reconstruct the ACL, the most common type of ACL reconstruction involves a graft from the semitendinosus tendon. After performing a diagnostic arthroscopic examination of the knee, the graft tendon is harvested. Then drill guides are used to place holes into the tibia (bone below the knee) and femur (bone above the knee). By placing the drill holes at the attachment sites of the original ligament, when the graft is pulled through the drill hole and into the knee, it will be placed in the same position as the original ACL. Fastening the graft in this manner allows new blood vessels to grow into the transferred graft and for healing to occur.”

Postoperatively, it is recommended that patients should use crutches for the first 14 days after surgery until they feel comfortable. Physiotherapy often begins immediately after surgery.

Following an initial six to ten weeks period of supervised physiotherapy, most patients will progress to a self-directed programme performed in a health club. Typically, it takes the reconstructed ligament approximately four to six months to heal. Until otherwise advised by your physician, tennis, martial arts, and other sports that require rapid direction change must be avoided for 6 months after the surgery.