Dr Phat is one of the most experienced doctors at FV Hospital, especially when it comes to treating trauma and injuries associated with work accidents, traffic accidents or sporting events. He is also a renowned expert in offering surgical treatments for musculoskeletal conditions and injuries including arthroscopy, joint replacement, cartilage and bone transplantation, ligament reconstruction and microsurgery to reconnect amputated legs and arms…

Dr Le Trong Phat graduated from Rheinische Friedrichs-Wilhelms Medical School, Bonn, Germany, in 1988. He then obtained his PhD in Orthopaedics from the same university in 1993.

Dr Phat’s career includes nearly 30 years of orthopaedics experience in highly respected roles at prestigious German hospitals. One of his most notable postings is his 10-year position as Deputy Head of Surgery & Orthopaedic Surgery in Franziskus Hospital, Linz, Germany.

Due to his extensive professional knowledge and skills, Dr Phat was offered the role of Head of Orthopaedics at FVH in 2010. Since holding this position, Dr Phat and his team have facilitated long-term strategic developments for FVH Orthopaedics Department by introducing the following advanced techniques into treatment procedures: 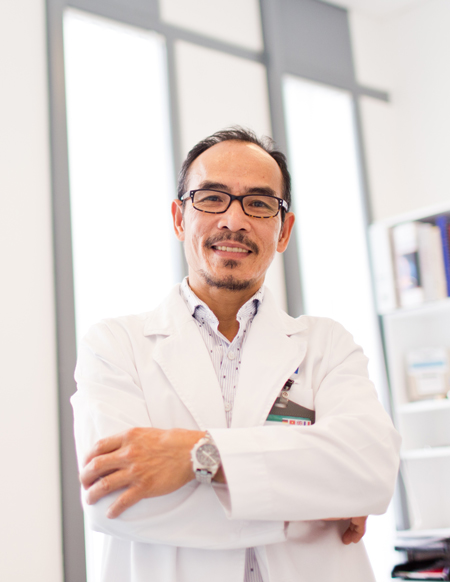 When 14-year-old Do Trong Hieu visited FVH in 2014, he was suffering from heart disease and a congenital deformity of his knee joints which meant that he could not walk as his legs were unable to straighten and bend properly.

Diagnostic results showed that his patella was completely dislocated while the tibiofibular joint was partially dislocated. The patellar tendon and some ligaments had become stuck together, the anterior and posterior cruciate ligaments were stretched and torn, and the lateral meniscus was missing. Many hospitals had refused to treat Hieu because his case was exceptionally rare with a very low chance of success. After consulting with some doctors in Australia, they recommended leg amputation and an artificial leg (prosthesis) to regain the patient’s ability to walk. Because Hieu’s was such a complicated case, Dr Phat sent Hieu’s medical records to Germany so that he could consult with leading international professors and doctors. All confirmed that this was the first case of its kind that they had encountered and the surgery would require a wealth of specialist skills and experience to succeed.

Dr Phat decided to perform surgery on Hieu’s left leg first. The ligaments were dissected from the muscles; then the patella was moved and repositioned. Doctors then reconstructed the cartilage, loosened the muscles and tendons, and realigned the tibia bone. Throughout each surgical procedure, Dr Phat had to make very delicate adjustments. Four months later, when Hieu’s left leg was in a stable condition, doctors performed surgery on his right leg. Hieu then continued physiotherapy and three months later he was able to walk on his own legs without the support of crutches. Hieu now attends school and his lower limb mobility is normal and allows him to walk and run along with his peers.

Ms N.T.P.V., a 67-year-old resident of Hanoi, had suffered from knee degeneration for more than 25 years which had not only led to persistent pain and discomfort in both of her knees but also made her prone to falls with increasing frequency.

After examining her case, Dr Phat indicated surgical treatment for both knees. A bilateral total knee replacement is uncommon in Vietnam – this demanding surgery is often carried out only in developed countries where there are adequate facilities for post-operative care.

Because Ms V. had been suffering from knee degeneration for a long time her meniscus and cartilage layer was completely worn away. Even so, the three-hour surgery ended in success. Just one day later, she started physiotherapy and was soon able to practice walking with the aid of crutches. Four months later, Ms V.’s knee function had been restored, allowing her full mobility and pain-free daily activities.

Arthroscopic surgery on a complicated shoulder dislocation and fractured arm

Ms Y. M. A. A., a 65-year-old French patient, suffered a shoulder dislocation and broken right arm due to a fall while travelling Vietnam with her husband. Referred by her insurance carrier to FV Hospital, rather than seek treatment in Hanoi Ms. A decided to bear with the pain and take a long flight to FV Hospital in HCMC from the north of Vietnam.

Examination and tests revealed that Ms Y. had suffered four fractures, so Dr Le Trong Phat decided to perform an urgent shoulder replacement surgery. If Ms Y. had waited any longer to have surgery, she would risk shoulder stiffness and the possibility of recovering the full use of her arm would have been just 20 per cent.

Dr Phat says that this surgery was fairly complicated because the patient was older, had travelled a long way so was a little run down and had suffered multiple fractures close to her shoulder joint. Therefore, he decided her best treatment option was to undergo arthroscopic surgery as soon as possible.

The surgery was successful and the replaced part of her shoulder rehabilitated well. Ms Y. stayed in Vietnam for six weeks to continue physiotherapy and is now recovering in France. Ms Y. can use spoon to eat, hold brush to draw and do light exercises with her right arm without pain.

Dr Le Trong Phat has used his skills and experience to enable many patients to regain their basic functions and return to a normal quality of life. He continues to be extremely diligent and at forefront of his field, continually researching and developing other advanced therapies to help more patients in the future.