Hearing testing for newborns, now standard across Europe and America, allows those babies with impaired hearing to be identified early in the first few months of life. Tests used for hearing screening are simple and quick to perform with no risk of harm to your baby. FV Hospital’s Otolaryngology Department has been equipped with new-generation hearing screening Sentiero devices, which allows newborn hearing screening services to enable early identification of hearing loss so that treatment can be offered at the earliest opportunity.

The mother of two-year-old B.H.M. from Vung Tau told us that she brought her daughter to FV Hospital for a hearing screening when little M. didn’t show any signs of developing speech. “M. wasn’t talking like most children her age. My husband and I spent a lot of time trying to teach M. to speak but she showed almost no progress,” she recalls, “I worried a lot and decided to bring her to doctor who concluded that my daughter had  congenital hearing loss. If she couldn’t hear sounds, M. would never be able to speak.” After conducting the necessary examinations and diagnostic tests, Dr Nguyen Quang Dai, Head of ORL, FV Hospital, decided to give M. a cochlear implant. 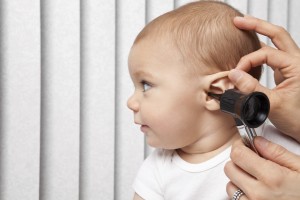 Dr. Dai said: “The golden time to perform cochlear implants on those with congenital hearing loss is from 2.5 years to three years of age. If cases are identified early and the child treated at this age, they have a much better chance to develop their speech at the same rate as their peers.”

Following her cochlear implant procedure, M. started six months of speech therapy and began to master speech, language and communication skills. M.’s mother said: “We burst into tears for happiness when our daughter called us Mom and Dad for the first time.”

Studies showed that the early identification of congenital hearing loss, typically in the first six months of life, and subsequent intervention gives these babies a better chance to achieve normal speech and communication abilities. In fact, four to five in every 1,000 newborn babies are affected with hearing loss, one or two of whom suffers from near or complete deafness. A variety of causes are known, such as illness during pregnancy, consanguinity of parent and medical poisoning. Around 15 per cent of hearing loss cases are hereditary, while 30 per cent are the result of unknown causes.

Previously, hearing tests were only given to high-risk newborn babies, such as pre-mature babies (born earlier than 37 weeks) post-mature babies (born later than 42 weeks), and babies with weak health or congenial external deformities. Under this new hearing screening system, FV Hospital’s ORL can introduce overall hearing impairment screening programme to all newborn babies before they are discharged or in the first two weeks of their life, but no later than three months of age.

The screening test is performed while your baby is settled or asleep. It will not hurt or harm your baby and only takes a few minutes. FV Hospital’s ORL has an international standard audiometry room with a soundproof environment that does not allow sound to echo, helping to improve screening accuracy and sound classification. FV Hospital otolaryngologists will carry out the following hearing screening tests:

Results of CAEP test are used to assess the baby’s response to sounds. If results of the otoacoutic emissions test and auditory steady state response test indicate hearing impairment, it is recommended that babies wear a hearing aid.

While auditory braitem response cannot tell whether a baby can hear the sounds emitted by the hearing aid or not, cortical auditory evoked potentials test can. This test is the best option to measure the response from the baby’s nervous system to sound signals produced by the hearing aids.