Doctor Nguyen Thi Thu Huong graduated from the University of Medicine, Ho Chi Minh City in 2010 and  received her Master’s degree in Internal Medicine in 2014 with Specialisation degree level 1 of Endocrinology in 2014. In the same year, Dr Thu Huong also became a resident doctor in Endocrinology, at the University of Medicine in Ho Chi Minh City.

With more than 10 years of experience in the field of endocrinology, Dr Thu Huong is known as a person with high expertise in the treatment of diseases such as diabetes, gonadal disorders and disorders of thyroid, adrenal and pituiary glands. For many years Dr Thu Huong is passionate and has continuously pursued Paediatric Endocrinology, especially the diagnosis and treatment of growth hormone (GH) deficiency. With expertise and dedication, Dr Thu Huong has successfully treated many cases and received the love and trust from patients. 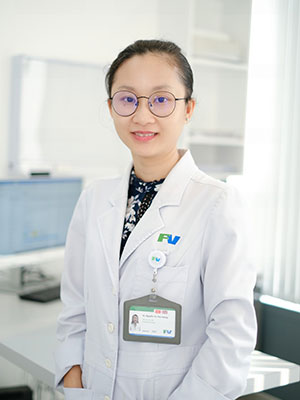 Hopefully with her talent and medical ethics, Dr Thu Huong will provide many effective methods for the diagnosis and treatment of our endocrine patients. At the same time, helping the team of FV Endocrinology Unit develop further in the future.