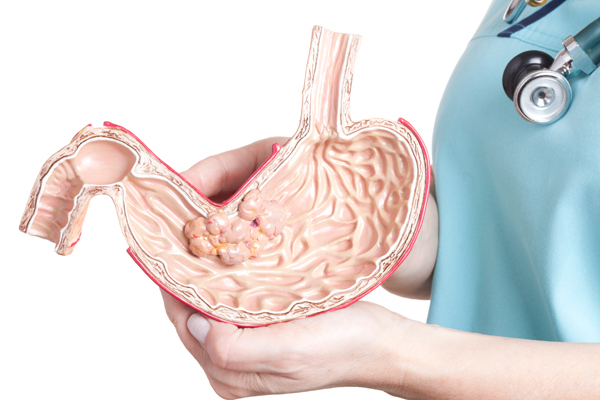 Gastrectomy by open surgery had been the only option for surgical gastric cancer treatment for a long time. In recent decades, the use of minimally-invasive procedures for gastric cancer, including laparoscopic surgery or gastrointestinal endoscopy surgery, has increased rapidly. In Japan and Korean, gastrointestinal endoscopic surgery, such as endoscopic mucosal resection (EMR) or endoscopic submucosal dissection (ESD) has become a leading option for patients with early gastric cancer, and provides lower risks of lymph node metastasis.  Although long-term oncologic efficacy of laparoscopic gastrectomy is still under research, this procedure has been accepted and is used for early gastric cancer all over the world, and typically in East Asia, such as China, Japan, Korea its use is increasing.

A 50-year-old patient named N.D.K, from Vung Tau was admitted to a local hospital due to erosive gastritris which caused stomach bleeding. A biopsy was done and the results showed he was suffering from stomach cancer. With the hope for the possibility of successful treatment, Mr. K decided to visit FV Hospital as it was recommended to him by many people.

After reviewing all necessary tests of this patient, Dr Do Minh Hung, Head of General Surgery at FV Hospital decided that: “Mr K’s cancer can be treated by surgery. His tumour is located at the lower one third of his stomach without serosa invasion. The CT scan result and endoscopic screening also revealed that the tumour had not largely metastasized into the patient’s liver and peritonaeum”.

Dr Minh Hung also noted that the removal of the cancer by partial gastrectomy with extended lymphadenectomy was totally possible in Mr K’s case.

Laparoscopy-assisted gastrectomy with D2 lymphadenectomy can be done for advanced gastric cancer treatment being very safe and efficient.  Patients have less pain, faster recovery, and a shorter time in hospital. Long-term results are initially positive.

In the case of patient K, four small incisions were made; at his navel, left lower quadrant, upper right quadrant, and left quadrant to insert the laparoscope. Following D2 lymphadectomy in line with Japanese Gastric Cancer Association’s guidance, Dr Minh Hung continued with restoring gastrointestinal continuity in a Roux-en-Y fashion by using the endoscopic procedure. This Roux-en-Y reconstruction helps the patient’s gastrointestinal circulation to be more natural.

Compared to open surgery with lymphadectomy, laparoscopic lymphadectomy does last longer (surgery lasted over four hours in case of Mr. K) but results in little blood loss, no requirement of a blood transfusion, shorter recovery time thanks to limited movement and no large surgical incisions.

Laparoscopy-assisted gastrectomy with D2 lymphadenectomy is a safe and feasible procedure for advanced gastric cancer and is becoming more popular in Vietnam. This procedure preserves the benefits of an endoscopic technique but still ensures it is a safe oncologic procedure. This type of surgery can be done at a well-equipped hospital by a team of surgeons who are experienced in laparoscopy-assisted gastrectomy with standard lymphadenectomy.

Today, more and more patients are benefiting from this procedure which is accepted as standard treatment for early gastric cancer.