Adrenal gland surgery is a challenging urological operation because of its hard-to-reach location in the retroperitoneum, on top of the kidney, next to the diaphragm. In recent years, surgeons at FVH’s Urology Department have successfully performed laparoscopic adrenalectomies with an positive treatment outcome. 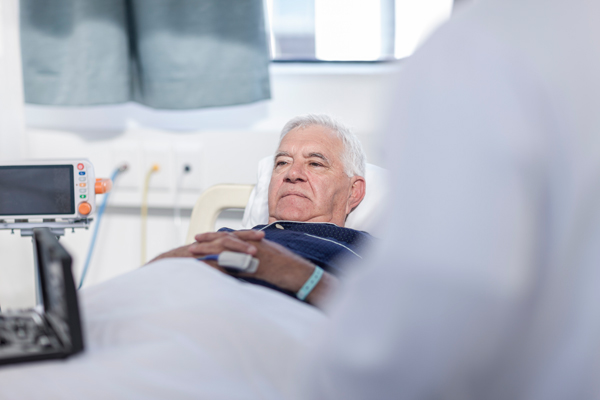 When Laotian patient Mr. P.H., 28, underwent a health check-up, a small tumour in his left adrenal gland was discovered during an ultrasound procedure. He had no visible symptoms other than his usual high blood pressure.After being referred to FVH’s Urology Department, Mr. P.H. was cared by Head of Urology Dr. Do Quang Minh. After examining Mr. P.H., Dr. Minh requested the necessary tests, including a blood test and adrenal gland function test, electrolyte test, urological system ultrasound, CT scan and MRI. The test results showed a non-functioning tumour 4.5 cm in size. Dr. Quang Minh indicated a retroperitoneal laparoscopic adrenalectomy for this patient.

In the operating theatre, Mr. H was put in the tile position at 90 degrees. Dr. Quang Minh made the first 1.5 cm incision to the subcoastal region to insert the endoscopic tube and created a closed cavity by insufflating a glove figure. Two remaining trocars were then placed on the middle and anterior axillary lines under guidance of a camera inserted through the first trocar. The fat layer around the kidneys was removed and dissected to expose the boundary line between the upper kidney pole and adrenal gland. Dr Quang Minh then located the tumour and defined the adrenal veins.

Mr. P.H.’s laparoscopic left adrenalectomy took more than one hour. The result was positive, with no complications and insignificant blood loss, so no blood transfusion was required and the patient was only required to stay at the hospital for three days.

A retroperitoneal laparoscopic adrenalectomy can provide easy access to the adrenal gland at its position deep on kidney pole. The surgery site is also exposed visibly due to the use of the Harmonic Scalpel blade, an advanced technique which helps to avoid the dangerous complication of blood loss.

There are two outstanding techniques in laparoscopic adrenalectomy, i.e. cavity creation and tumour dissection. A   retroperitoneal cavity is created by placing a insufflate glove figure. Dr. Ngo Xuan Thai, a Urologist at FVH’s Urology Department who has intensively researched and successfully performed this technique in many cases, says that he occasionally creates a retroperitoneal cavity using his index figure. The advantage of this technique is to avoid unnecessary dissection of the retroperitoneal cavity and move the adrenal gland forward. Therefore, surgeons may access the back of glandular tissues more easily, shortening the surgery duration.

Then the technique of adrenal vein control is applied during tumour dissection using the Harmonic Scalpel blade, which   cuts and cauterises tissue at the same time. The tumour is then removed from its surroundings and the veins are cauterised by this surgical blade, helping to reduce blood loss.