“At first, when I decided to visit Ho Chi Minh City for treatment, I consulted many people and considered several hospitals. But my husband said, “You should go to FV Hospital if you need radiation or chemotherapy: there is a modern cancer treatment centre there, and the doctors are skilled at controlling side effects from radiation or chemotherapy,” says Mrs D.T.L.P. (45 years old, from Binh Duong) who recently received successful surgery for tongue cancer.

Mrs D.T.L.P. came to FV with sores on the back of her tongue which were causing her pain and not healing. She went to see Dr Pham Long Dao at FV’s Ear, Nose and Throat Department. After examining the wound, Dr Dao assigned a biopsy of the wound margin and the results implied that it was a squamous cell carcinoma of the tongue. To obtain more accurate results, the doctor assigned a second biopsy with a larger sample collection, and sent those samples for testing at two labs, one in Thailand and one at Ho Chi Minh City Cancer Hospital. 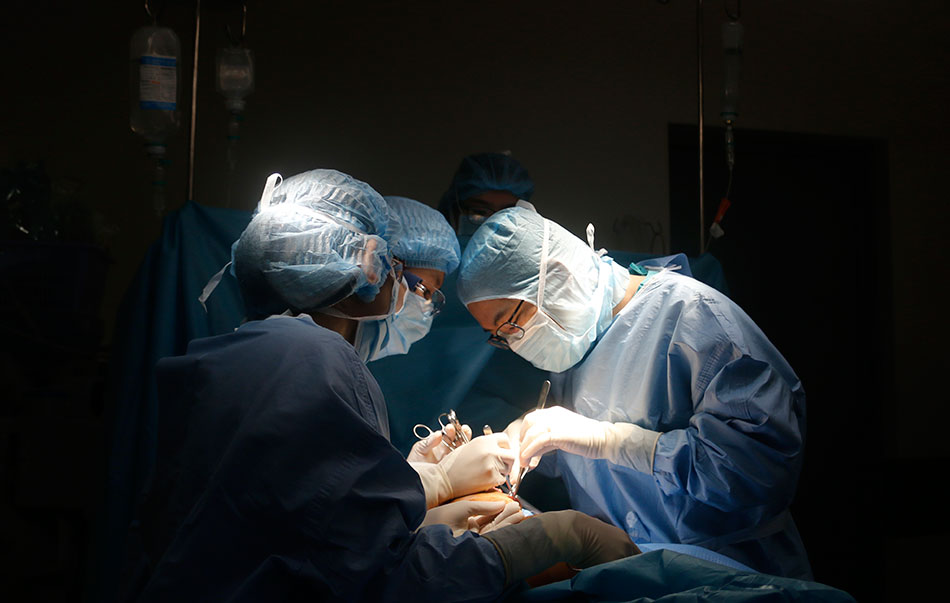 Dr Dao also required Mrs D.T.L.P. to have a CT scan of her neck and face to further investigate the tumour in her tongue and neck area. Imaging showed a tongue tumour and several enlarged cervical lymph nodes. Combining the CT with the second biopsy results, the doctor determined that the patient had squamous cell cancer on the right side of her tongue which required surgery.

Dr Dao clearly explained the condition and analysis of the best treatment direction to Mrs D.T.L.P. After a week of consideration she agreed to Dr Dao’s proposal and scheduled the surgery. Mrs D.T.L.P. was given a general anaesthetic. First, Dr Pham Long Dao treated the tongue tumour by cutting a 0.5 cm section of skin from the edge of the ulcer so that a frozen section could be sent to the Pathology Department, FV Laboratory and Blood Bank. Testing the frozen section helps to ensure that doctors removed the entire tumour while preserving as much of the tongue as possible. While waiting for the frozen section results, Dr Dao and his team continued to selectively remove the lymph nodes in Mrs D.T.L.P.’s neck.

Her frozen section results were ready in 45 minutes: approximately 0.5cm from the edge of the lesion sample was clean of cancer cells. Because the tumour was small and located at the back of Mrs D.T.L.P.’s tongue, the doctor chose to suture without resurfacing the tongue.

The operation was completed within four hours, and Mrs D.T.L.P. was discharged four days later. Currently, her health is completely stable, and she can eat and talk normally.

Although it has been more than six months since her surgery, Mrs. D.T.L.P. remembers how she felt when she received her first diagnosis.

“At first, I thought there was no way it was cancer because it was so small, just like a normal canker sore. But then it became was more and more painful and didn’t heal, so I went to see the doctor,” she explains.

“I also visited many hospitals, but they were unable to reach a diagnosis. Then my husband advised me to go to FV for treatment, partly because of the stressful epidemic and partly because I trusted FV to treat this disease.”

When asked about her current life after surgery, Mrs D.T.L.P. adds, “I feel completely normal now. The incision has healed, and I can talk and eat well. Dr Dao often calls to inquire about my condition and is very dedicated. I feel very secure and satisfied. All of the FV staff members are very kind and friendly.”

Dr Pham Long Dao says that tongue cancer is a malignant tumour which originates in the mobile or fixed part of the tongue, where the base connects to the lower part of the mouth. This is a common type of cancer and accounts for about 30 per cent to 50 per cent of cancers in the oral cavity. Selective neck lymphadenectomy is indicated if the risk of lymph node metastasis exceeds 15 to 20 per cent and is usually performed for patients with stage T2 tongue cancer.